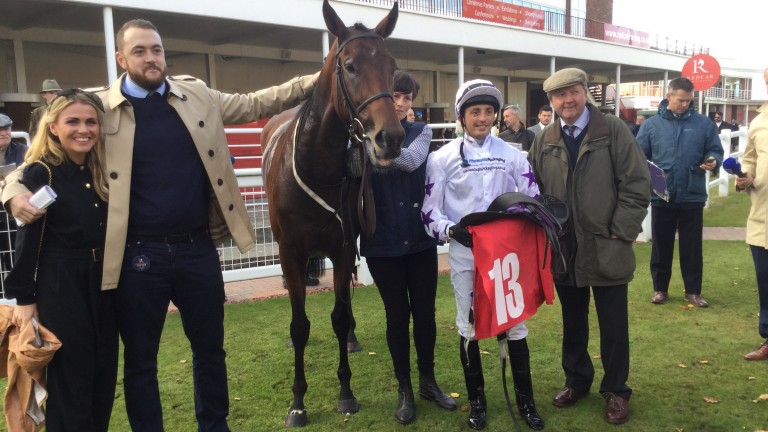 Lee Bond (left) battled through the pain barrier to watch Give It Some Teddy bounce back to form with a return to Redcar on the agenda
David Carr
1 of 1
By Charlie Huggins UPDATED 7:44PM, AUG 1 2021

Owner Lee Bond’s eventful journey with Give It Some Teddy continued as he battled through the pain barrier to watch his Tim Easterby-trained runner take the £25,000 Summer Cup handicap stakes as part of a big-priced treble for the Yorkshire trainer.

Bond, who only had his gallbladder removed last Monday, was at the course to witness the seven-year-old land the feature contest in a first win since buying the horse back in a sales catalogue in February.

Bond speaking to Racing TV said: “He’s like a member of the family. I bought him with Alan Swinbank and we then moved him to Tim’s when Alan sadly passed.”

Give It Some Teddy racked up seven wins in his first spell for Easterby, with three of them coming in Redcar’s straight-mile series before being sold in 2019. After three below-par starts for Stuart Williams the horse was bought back.

Bond explained: “I felt so guilty for letting him go. The money was right for him at the time, but I never really forgave myself.

“There are not many trainers who could have brought him back and I’m just chuffed he’s got back to winning ways.”

Redcar could once again be on the agenda next month and he added: “I’d have to speak to Tim, but I guess he could be going there again.”

Cassy O’s win in the 7f handicap and Golden Melody’s victory in the first division of the mile handicap completed Easterby’s treble, both of whom were ridden by David Allan.

FIRST PUBLISHED 6:49PM, AUG 1 2021
I felt so guilty for letting him go. The money was right for him at the time but I never really forgave myself

'He's been a legend' - veteran sprinter Danzeno floors Brando in feature 'One to keep an eye on' - improving horses help Tim Easterby to 56-1 hat-trick 'Genius' Duran Fentiman brings Silver Cup joy for Ontoawinner Bollin Eric: 'He just had natural ability - he could do anything' Prix de l'Abbaye 'definitely still an option' for Curragh tenth Winter Power 'We've always thought a bit of him' - Hilary's Boy lands 22-1 win for Eyre