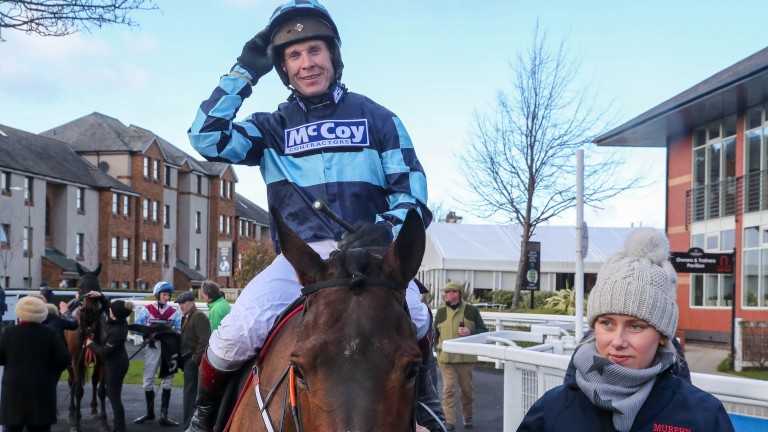 Richard Johnson returns in triumph on Made For You
John Grossick (racingpost.com/photos)
1 of 1
By David Carr UPDATED 4:26PM, FEB 27 2020

The champ is back. Musselburgh commentator Malcolm Tomlinson got it spot on in the heat of a frantic finish – not that anyone should have been surprised.

Richard Johnson has not won four jump jockeys' championships without being able to bounce back from injury. Yet even by his standards it was quite something that a mere 37 days after breaking his arm in a fall at Exeter he should be back in action at the other end of the country.

Not only back riding but back riding two winners and doing so in typically never-say-die fashion, driving the Olly Murphy-trained Made For You up the run-in to force his head in front close home in the 2m hurdle at the Scottish track before scoring on Dubai Guest in the closing bumper.

It was as though he had never been away, although Johnson, who signed up as a Racing Post columnist and ambassador this week, himself joked: "I felt I needed the race more than the horse did! I'll improve for the run.

"My fitness is not too bad, it's just match fitness that's a different thing. It doesn't matter how much swimming or other stuff you do at home, this blows the cobwebs away.

"I'm very lucky having these sort of horses to come back on. He did all the hard work. Every time I asked him he gave me a bit more. The arm feels very good. I'm lucky, it's all gone very smoothly. You never know when you break something long it's going to take but I've had lots of help." 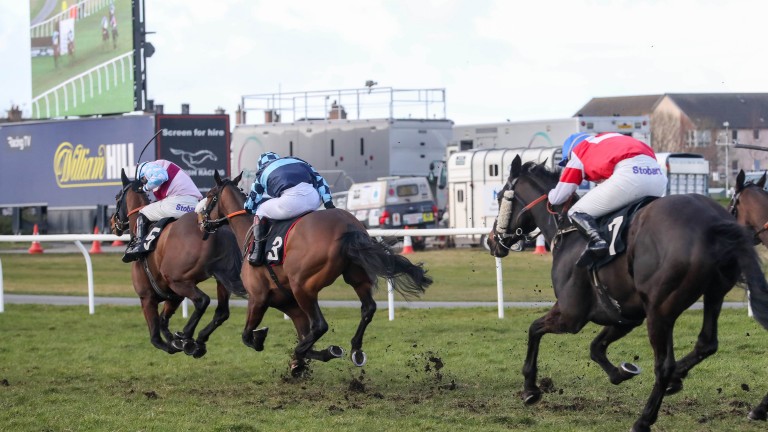 Richard Johnson drives Made For You (No.3) to pass Vino's Choice on the run-in
John Grossick (racingpost.com/photos)

It was much more straightforward for Johnson on his second ride back as he comfortably took the bumper on evens favourite Dubai Guest, also for Murphy.

"It's been a good day back at the office," said the rider, who is taking things steady in the very early days of his comeback.

"I'll ease myself back in," he said. "I've got a chase and a hurdle tomorrow and it's a big thanks to Dave Roberts and all my trainers – you can't go without the horses."

He has not given up hope of a fifth riders' title and started the day 20 winners behind Hughes.

"I must admit when I was lying there at Exeter I thought it had gone but with the weather on my side Brian hasn't had as many opportunities as it looked like he was going to have to ride winners so it's possible but it's a big gap."

"It's unbelievable," he said. "If you look at Tyson Fury and now Richard, it's extraordinary what the human mind can do when it sets itself to do it."

Watch our new weekly show, What A Shout. Big calls, big races, available on the Racing Post YouTube channel every week from Friday evening. Subscribe to the Racing Post channel so you don't miss out

FIRST PUBLISHED 2:26PM, FEB 27 2020
I felt I needed the race more than the horse did! I'll improve for the run. It's been a good day back at the office

Brewin'upastorm readily accounts for McFabulous in Grade 2 at Fontwell 'He's a bit of a lad' - Rockadenn causes upset as Nicholls plots spring targets Paul Nicholls confident McFabulous will take all the beating in National Spirit Andy Irvine 'keeps the show on the road' with a 28-1 winner Another star? Exciting Minella Drama bids to emulate Shishkin in Sidney Banks