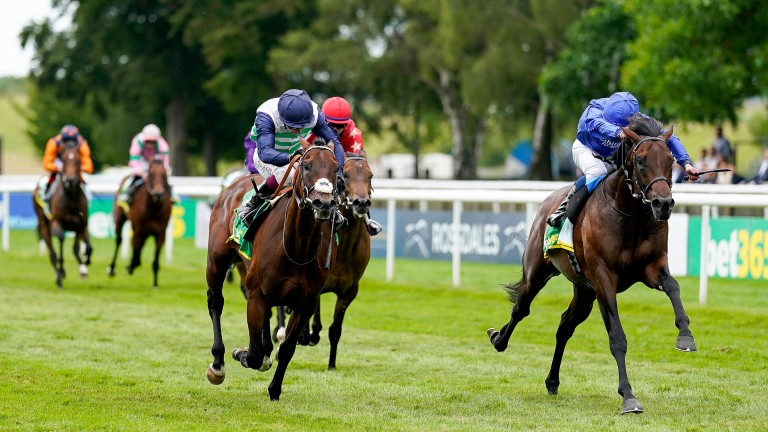 Charlie Appleby continued his recent domination of the bet365 Superlative Stakes thanks to Native Trail, who edged out Masekela by a short-head to hand the Godolphin trainer his fourth success in the race in the last six years.

Described as a "big unit" by his trainer, Native Trail was taking a huge step up the divisions after winning a Sandown maiden and although he took time to find top gear, he hit the line with purpose under William Buick to land the 7f Group 2.

"The way the race was developing I knew he'd be doing it all the right way round and he would be hitting the line strong," said Appleby. "He's a very laid back character and I feel that by stepping up in trip in time, we'll hopefully see a little bit of improvement."

Appleby's 2020 winner Master Of The Seas and his 2018 victor Quorto both tackled the Goffs Vincent O'Brien National Stakes at the Curragh after winning the Superlative and the same Group 1 contest on September 12 could be next for Native Trail.

Appleby added: "I like to have a crack at the National Stakes and the ground there would suit him. My only concern coming into today was the quick ground. He's a big unit and has some big feet on him, so a little bit of ease in the ground won't do him any harm."

Hannon up for the Cup

The Bunbury Cup traditionally ends in a tight finish involving half a dozen runners but not so this year as Motakhayyel recorded a three and a half length romp under Frankie Dettori to win the race for the second year in a row.

The 11-2 chance was the first horse since Mine in 2005 and 2006 to win successive runnings of the cavalry charge and did so off top weight to complete a productive July festival for Richard Hannon.

The Shadwell Estates-owned gelding looked like a Group horse running in a handicap when sweeping to the front in the Dip to account for the consistent Fundamental and long-time leader Lord Rapscallion. 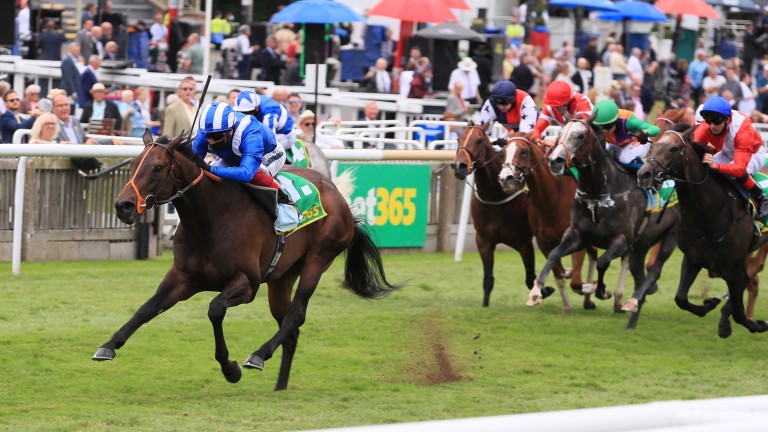 The winner was led up by Ella Smith, who was in familiar territory having led up Snow Lantern to success in the Group 1 Falmouth Stakes 24 hours previously.

Hannon said: "Frankie asked me in the paddock why he was riding Motakhayyel as he reckoned I'd used up all my luck this week but in the end we've helped him get on the board.

"This horse is a real gentleman and does his thing in these races and Group 3 contests, but I didn't expect him to win like that."

As to future targets, he added: "I expect he'll run in the mile at Goodwood, but this ground is important to him."

William Buick had earlier celebrated his first winner since returning from an 11-day ban when steering Royal Fleet to victory in the bet365 mile handicap.

Buick, firmly in the hunt for a first Flat jockeys' championship, is soon to be married and found time to sneak in a stag do during his ban, but was delighted to be back on track with instant success.

"I had my stag do which I’ve had time to recover from but it’s great to be back," said the rider.

The winner hung markedly to his left and Buick added: "He’s got a lot of ability and he just makes life hard for himself. He wanted to go left which is a bit of a habit and I didn’t have much of a choice but at least we had the rail.

"He’s done well to win. He’s possibly a horse who could get another couple of furlongs."

What's on this week: all eyes on quality Arc as Longchamp takes centre stage 'As an afterthought, I decided I should do a £1 each-way acca - I won £550,000' 'We have two going to the Arc in great shape' - Hurricane Lane to join Adayar Dascombe drought ends as Flaming Rib lands first win in a month Returning Nugget lowers track record to set up Champions Day tilt It's a Jamie Spencer special as Cambridgeshire gamble is foiled by shock winner