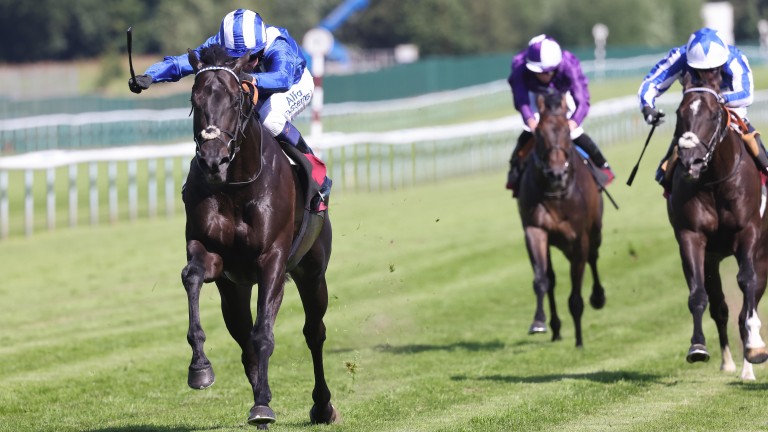 The highly regarded Mutasaabeq will return to Group company ahead of a big autumn campaign after he bounced back to his best with an impressive success in the feature 7f conditions stakes.

The son of Invincible Spirit was not disgraced in the 2,000 Guineas before disappointing in the Jersey Stakes, but he showed his true colours when demolishing his classy opposition by four lengths and will now step back up to Group 3 level at Glorious Goodwood.

Trainer Charlie Hills said: "It was great to get him back to winning ways, they went a good pace which helped. The plan was to come here and then go to the Thoroughbred Stakes at Goodwood.

"The horse was under the weather at Ascot and was beaten far too early to put it down to the ground. I hope it'll be the big races for the rest of the season, but we'll make a proper plan after Goodwood."

Gun off the mark

A week on from Snow Lantern's thrilling success in the Falmouth Stakes, Richard Hannon and owners Rockliffe Stud were back in the winner's enclosure with another grey as Noonday Gun powered to victory in the opening 1m6f handicap.

The four-year-old is a half-brother to Snow Lantern – being out of 1,000 Guineas heroine Sky Lantern – and gained his first win of the campaign with a two-length success under Rossa Ryan.

Chris Dwyer continued his excellent July with a third winner from seven runners this month when Global Wisdom notched an impressive debut win in the 6f novice.

FIRST PUBLISHED 6:56PM, JUL 16 2021
I hope it'll be the big races for the rest of the season, but we'll make a proper plan after Goodwood

Sunday Series fixtures could rise despite worries over staff and rider workloads 'She could have run in the Leger' - Free Wind blows rivals away in Park Hill 'I'll grab a lump of mane and hang on tight!' - Geraghty gets set for comeback Oisin Murphy nets fabulous four-timer to strengthen title claims Kevin Ryan gunning for more Group 1 glory with Glass Slippers in Flying Five