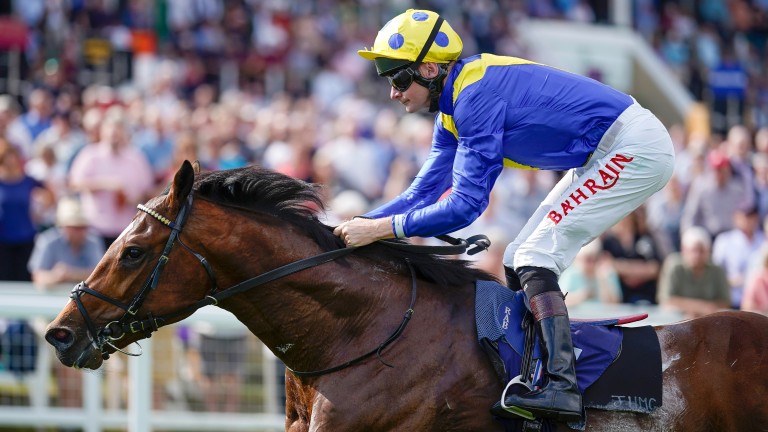 It has been a superb week for John and Thady Gosden and owner Saeed Suhail and the combination had more cause for celebration as Mighty Ulysses cruised into the Royal Ascot picture with success in the mile novice.

Sent off the odds-on favourite after finishing fifth in the Listed Blue Riband Trial at Epsom last month, the three-year-old relished the drop in trip to score under Benoit de la Sayette, who was partnering the colt for the first time.

"When you're at a young age like me, to ride a horse like that is quite exciting," said the winning rider. "He didn't stay last time out but he won at two over this trip so we knew the speed was there. To run a race like he just did there; it's very exciting."

Mighty Ulysses was trimmed to 16-1 (from 33) with Betfred for the St James's Palace Stakes next month, with Suhail's racing manager Bruce Raymond indicating the mile trip would be where the son of Ulysses's future lies.

Raymond said: "This is Mighty Ulysses's best trip I think and he looked like he was always going to win. Benoit gave him a great ride."

Also Royal Ascot-bound could be Nate The Great after the six-year-old struck in the feature 1m6f handicap for Andrew Balding.

The gelding had not run on turf since finishing midfield in the Cesarewitch, and after a busy winter on the all-weather he provided burgeoning apprentice Harry Davies with a 15th winner of the season.

"Nate The Great is a horse with a huge heart," said Anna Lisa Balding, wife of the winning trainer. "He was going to run in the Chester Cup last week but the ground went against him. He likes top of the ground and we'll see how he is but Royal Ascot will be on the table."

Steph Hollinshead secured her first winner of the season in style as Royal Musketeer's win in the 7f handicap for older horses under Cieren Fallon, was also the Staffordshire-based trainer's first ever winner at Newmarket.

Hollinshead said: "The horses have been running really well but we have just been lacking a winner so I'm really chuffed about this and to have the winner here is just great. They are in good order but now we have had that winner I can relax a little bit more now."

Callum Hutchinson hoping roommate rivalry can boost apprentice title hopes Rising star Davies rides first treble but has Ed Sheeran to thank for one winner Desert Crown impresses under big-race jockey Richard Kingscote in key gallop Desert Crown 'does not have to improve too much more to win the Derby' - Stoute Is Appleby fending off the red-hot Haggas? How the trainers' title race stands 'Enable talk silly, but Emily Upjohn in Taghrooda class' - Gosden on Oaks fancy