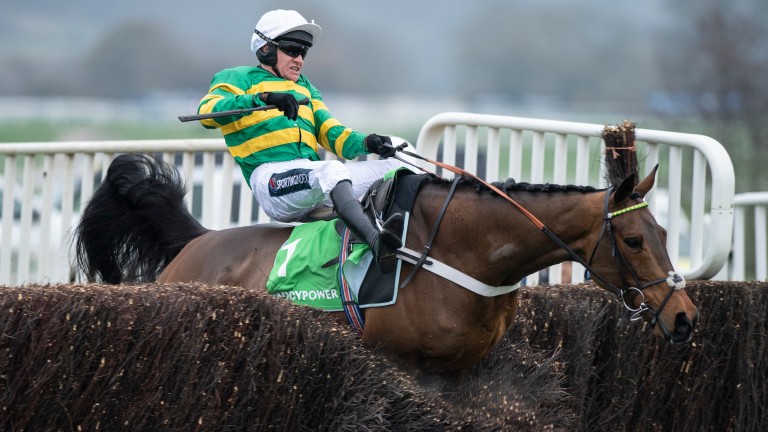 Champ ploughs through the second-last under Barry Geraghty, coming down with the race at his mercy
Edward Whitaker (racingpost.com/photos)
1 of 1
By Jonathan Harding UPDATED 5:09PM, JAN 1 2020

Midnight Shadow proved why you should never be afraid of taking on even the hottest horses in training when capitalising on a dramatic fall by Champ in the Grade 2 Dipper Novices' Chase.

It had been billed as the next step for RSA favourite Champ en route to the Cheltenham Festival and as he approached the second-last clear of his rivals it looked certain he would once again live up to his name with a hat-trick of victories over fences.

But fast forward five seconds and the complexion of the race changed entirely as he buckled on landing under Barry Geraghty. What appeared to be an exhibition became a nightmare for connections, who nonetheless took plenty of positives from the performance.

"He travelled brilliantly but just rolled around a bit going to the second-last and I'd say he was looking at the stands and not what was in front of him – otherwise it was brilliant," said Geraghty, who also suffered a fall on Sizing John at Punchestown on Tuesday.

Although he felt it was the best Champ had jumped all season, trainer Nicky Henderson admitted the eight-year-old's blunder may lead to a slight change of plan ahead of Cheltenham in March. 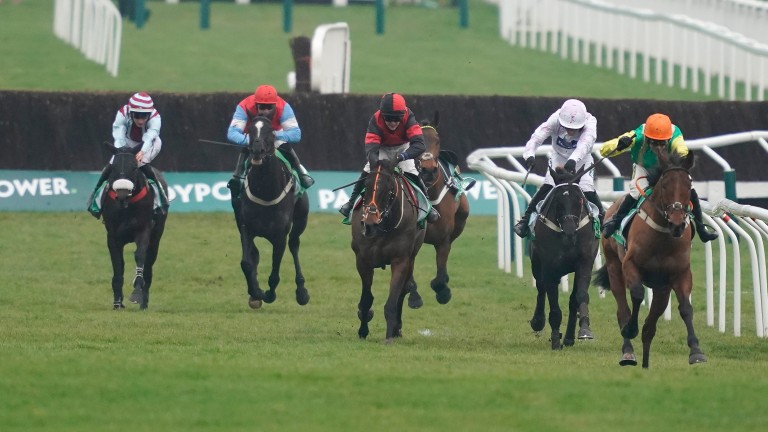 "We felt we needed to make the race a bit more honest for him because he does stay and there were horses we didn't want to sprint against," said the trainer, who has won this race twice in the last decade with Whisper and Oscar Whisky.

"He was really enjoying himself and jumped beautifully. I thought it was the best he'd jumped this season. He had everything under control and Barry said he was full of petrol.

"I wasn't planning on running him again before the festival and then stepping him up to three miles, but we'll have to wait and see. There are millions of ways to skin a cat and there are races like the Reynoldstown that could come into the equation, but you'd hardly want him to go to Cheltenham off the back of what he's done there."

For many, new year resolutions are broken in a matter of hours, but Midnight Shadow rarely fails to make a positive start to the year. His length-and-a-quarter victory over Paint The Dream was his first since landing the Grade 2 Relkeel Hurdle on the same card last season.

The eight-year-old, who was sent off at 4-1, was rewarded for a professional display of jumping under Danny Cook but almost added a drama of his own to the mix when idling in the final 100 yards.

"He was always going to be a chaser and he's done it nicely," said trainer Sue Smith. "We don't know what the situation would have been had the other horse not fallen because he's a confirmed three-miler and we're not just yet. We're really happy with him.

"You can't be afraid of one horse. It paid coming here and hopefully he'll be back in March, but there's a long way to go yet."

Midnight Shadow was introduced at 20-1 for the JLT Novices' Chase while Champ remained an unchanged 3-1 favourite for the RSA.

Barry Geraghty eyeing career in media and bloodstock after retirement 'I'm just concentrating on myself' - Coleman plays down McManus number one talk A true giant of the sport: how Geraghty's achievements measure up Noel Meade: Barry Geraghty was the strongest I have ever seen in a finish McCoy: 'He was a brilliant jockey in every department - and Archie's favourite' 'I have so many fond memories of Barry riding big winners for us'