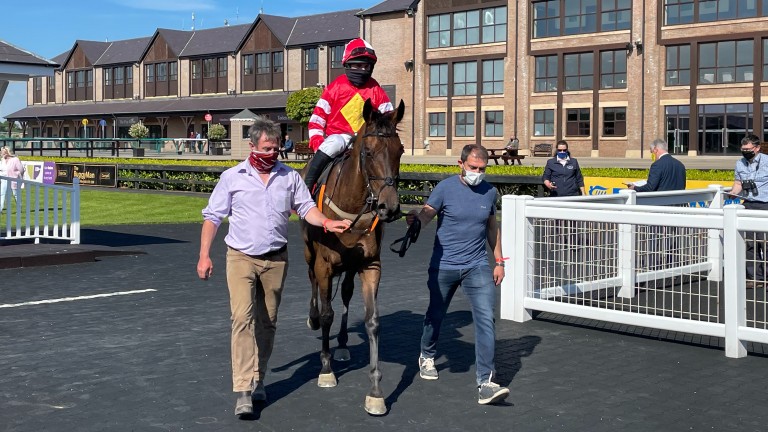 Brian McMahon (right) leads in Sizing Malbay after his victory at Punchestown
Justin O'Hanlon
1 of 1
By Justin O'Hanlon UPDATED 9:04AM, JUN 1 2021

Galway-based Clare native Brian McMahon has a good record with his small string at Punchestown, and saddled his second winner of this three-day meeting when Sizing Malbay stayed on resolutely under Phillip Enright to land the 2m4f handicap chase.

McMahon and Enright teamed up the previous day to land the feature handicap chase with the trainer's admirable servant Powersbomb.

Sizing Malbay was only having her second run for the trainer, but she sustained her effort from mid-division strongly to win going away by two and three-quarter lengths from favourite Robin De Roost and Fill The Tank.

"I love it here, I haven't had too many winners but most of them have come here," said McMahon.

"As her name might suggest, she is owned by a father and son from Miltown Malbay in Clare, which is only nine miles down the road from my home place. It's lovely to have a Clare connection for a winner."

Willie Mullins drew a rare Punchestown blank on Sunday after a treble on Saturday, but his runners were back in gear as he and rider Brian Hayes teamed up for an early double.

The Simon Munir and Isaac Souede-owned Fan De Blues put a number of disappointments over fences behind him with a smart display in the opening beginners' chase, a victory which was achieved in spite of him showing a tendency to jump left.

"I don't know why he did that, he's never done it before," said Hayes.

Perhaps the stage could be set for this horse to head towards Galway if he could get some ease in the ground.

Mullins and Hayes completed their early double in the 2m4f mares' hurdle as The West Awaits justified favouritism in a straightforward manner, beating Wat Ua Doin by 13 lengths.

Dynamite night for McNamara as Jazzaway leads Mullins charge in feature How a ping-pong rout told me everything about the extraordinary Patrick Mullins Fan De Blues follows in some famous hoofprints to win Grade 3 novice chase 'She'll be a big player in the Cesarewitch' - five who caught the eye at Galway Gin On Lime seeks fantastic four-timer for Henry de Bromhead in novice chase 'It's incredible to think I've won it twice' - can Patrick Mullins do it again?