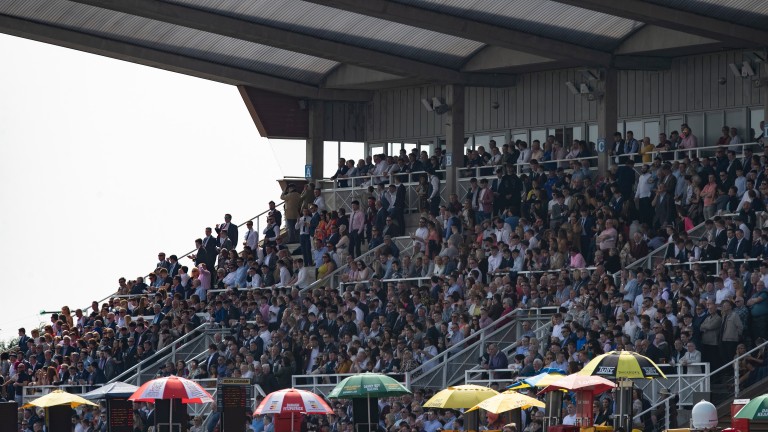 Fairyhouse, silenced for so long in the pandemic along with the rest of Ireland's racecourses, came alive as the Shannon Street Syndicate made their voices heard after Arrycan's victory in the Adare Manor Opportunity Handicap Chase.

Trained by Liam Cusack and ridden by Eoin Walsh, Arrycan needed every yard of the 2m7½f trip to mow down longtime leader Lord Lariat and win by half a length.

The celebrations looked set to go on long into the night if the post-race scenes are anything to go by, but the winning syndicate can be in little doubt that this year's extended trip was key. Last year, when Lord Lariat won the race comfortably, it was run over 2m5f.

Cusack said: “I’m delighted for the lads who own him. Some of them were involved with Bog War, who was a good servant to the yard and for some of them it’s their first horse. They will celebrate tonight.”

He added: “We’ll see how he is and the weather will dictate where we go. He’s entered at Punchestown on Tuesday but I doubt he’ll go there. He could be aimed at the opportunity handicap chase at Leopardstown over Christmas.”

Elliott doubles up with smart mares

Gordon Elliott was on the mark with two potentially smart mares as Riviere D’Etel took the beginners' chase and Glan landed the maiden hurdle.

Jack Kennedy, winning rider of Riviere D’Etel, said: “She was entitled to win that but I was very impressed with her jumping and she didn't miss a beat. She seems to have grown up an awful lot. She still likes to get on with things but she's more relaxed now and is a lovely prospect getting all of the allowances. Touch wood, she'll have a good year.”

Glan was an impressive winner under Mark Walsh and Frank Berry, racing manager for JP McManus, said: “She learned a bit at Listowel and hurdled great today. She just did enough to last home but she’s a nice little filly and has a bit of pace.”

Diamond could be one to sparkle at Galway

Galway has been and gone for another year but that’s not to say Emmet Mullins and the Mee family are not plotting for Ballybrit next year.

It isn’t by accident that Mullins and his owners do well in the west and Russian Diamond, who was unlucky at Galway this summer, finally got off the mark over fences in the 2m5f beginners' chase under Brian Hayes.

A change of tactics worked a treat for Russian Diamond, according to Mullins, who revealed the seven-year-old was likely to be aimed at the summer extravaganza next year.

Mullins said: “That was great. It was a no-nonsense ride by Brian and it's good to get off the mark. He's been unlucky over fences. He's had a few silly falls and unseated at Tipperary last weekend through no fault of his own. It's been a while coming.”

He added: “That's lively enough ground today but we might keep going with him, depending on the ground, for a while longer. I'm sure he'll be targeted for something at Galway next summer.”

FIRST PUBLISHED 7:10PM, OCT 9 2021
I’m delighted for the lads who own him. Some of them were involved with Bog War