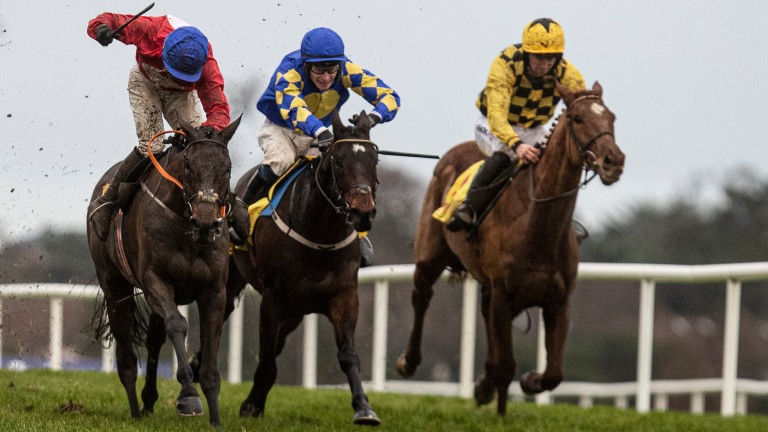 A Plus Tard (near): stays on best to deny Kemboy (centre) and Melon
Patrick McCann (racingpost.com/photos)
1 of 1
By Richard Forristal UPDATED 7:37PM, DEC 28 2020

Henry de Bromhead had gone gallingly close in each of the last three Savills Chases but A Plus Tard broke his hoodoo in the €150,000 Grade 1 with a consummate medley of class and determination that thrust him firmly into the frame for the Gold Cup .

Quite apart from the finish, which saw Darragh O’Keeffe, who was riding in his first Grade 1, conjure an irresistible surge out of A Plus Tard to collar Kemboy and Melon in the dying strides to prevail by half a length, this was an incident-packed spectacle.

In terms of answers, the three-mile showpiece might not have lived up to everything it promised, but what it lacked in conclusiveness it made up for in theatre. 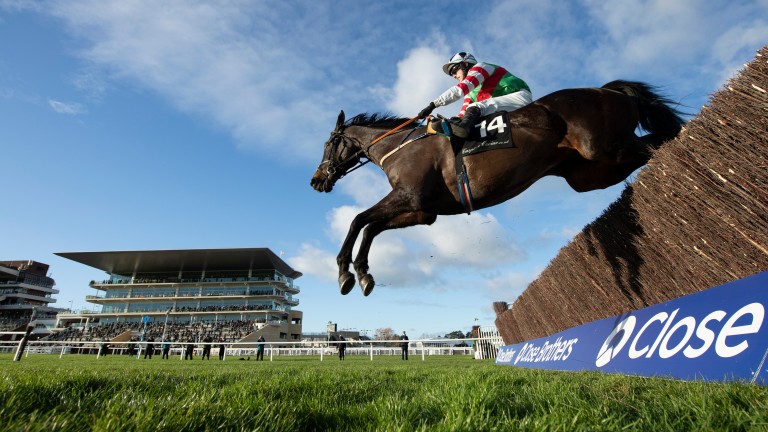 The drama began with De Bromhead’s Minella Indo, sent off the 5-2 favourite, crashing out under Rachael Blackmore at the eighth fence. Delta Work then parted company with stand-in rider Sean Flanagan at the next, but the most arresting plot twist came in a mesmerising climax.

As Kemboy led Melon over the last, it looked to be another coup for the rampant Willie Mullins. O’Keeffe, though, mugged them both.

It confirmed a grand arrival at the big stage for the 20-year-old reigning champion conditional, but it was also a significant landmark for De Bromhead.

The County Waterford trainer had saddled the Savills runner-up in 2017, 2018 and 2019, with Monalee filling the bridesmaid’s spot for a second time 12 months ago when Delta Work thwarted him by a head.

A marquee staying chase was one of the few prizes missing from De Bromhead’s record, and it will not be lost on him that, in A Plus Tard, he has a horse not dissimilar in profile to Sizing John, whose 2017 Cheltenham Gold Cup victory was the pinnacle of a whirlwind campaign after he stepped up in trip following his switch from De Bromhead to Jessica Harrington.

Like Sizing John, A Plus Tard was a Grade 1 winner at two miles, having claimed Chacun Pour Soi’s scalp in the Paddys Rewards Club Chase at Leopardstown’s Christmas festival a year earlier.

Subsequently a fine third behind Min in the Ryanair Chase, the six-year-old, a 15-2 shot, announced his enormous potential on stepping up to three miles here. With Minella Indo and Monalee also on the premises, De Bromhead is now assembling a pretty formidable team of staying chasers, while A Plus Tard is also another serious player for Cheveley Park Stud’s fledgling jumps division. 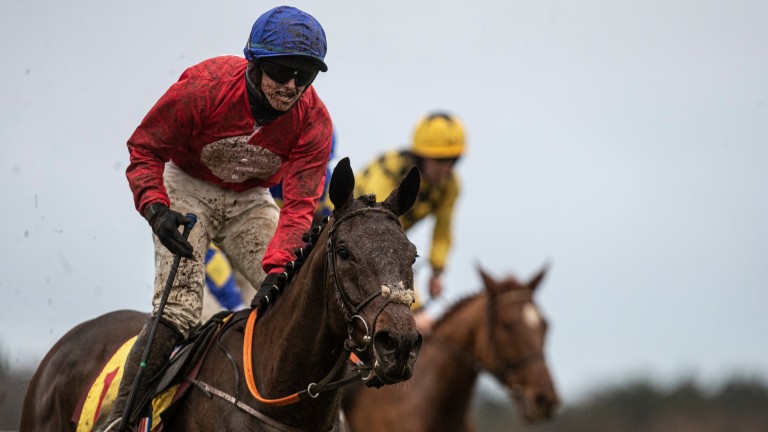 A Plus Tard: a first Grade 1 winner for Darragh O'Keeffe
Patrick McCann (racingpost.com/photos)

“He won a Grade 1 here over two miles and a furlong last year and now he wins this over three, and he is still only six. He has lots of class and was fantastic there. It was unfortunate with Minella Indo but he seems okay and Rachael seems okay, it was just very frustrating.”

De Bromhead would not be drawn on future plans. A tilt at the Irish Gold Cup is an option, with the Ryanair and the Cheltenham Gold Cup to be decided upon further ahead. He did accept, though, that A Plus Tard, who was cut to 10-1 from 66-1 for the Cheltenham showpiece by Paddy Power, now has to be talked of in those terms.

“Absolutely,” he replied when it was put to him that is now a Gold Cup contender. “He stayed really well there and needed all of the distance, but I wouldn’t like to speak for anyone yet. We’ll enjoy today – it’s a savage race to win."

For O’Keeffe, who received a one-day ban for his use of the whip, the future is also surely as bright as the present. At a time when there is a significant transition ongoing within the senior jump jockeys' ranks, the talented County Cork native's stock is rising.

He burst on to the big-race scene when guiding Mick Winters’ Chatham Street Lad to an emphatic Caspian Caviar Gold Cup success at Cheltenham a fortnight ago, having only ridden his first non-handicap Graded winner the previous week, and he is fast becoming the go-to man for choice spares.

“It’s brilliant,” he said afterwards. “To ride a winner like that – I still think I’m dreaming. It’s unbelievable. I thought going to the last I had every chance, because when I got down and gave him a squeeze, he really galloped to the line. He was very good."

Kemboy and Melon took turns setting strong fractions. Presenting Percy, Fakir D’Oudairies and Samcro – the latter two of whom were pulled up – never landed a blow, while Allaho could not lay a glove on the front two either, eventually taking fourth ahead of stablemate Tornado Flyer.

Kemboy and Melon looked to have it between them turning in, and to their credit they kept boxing on, but in the end their earlier exertions told.

“All mine ran well,” said a magnanimous Mullins. “Kemboy was back to himself and Melon ran a fantastic race. He was jumping very well and Patrick didn’t want to give it away, but we might just try different tactics the next day. Allaho ran well, although I'm probably a little disappointed with him.”

FIRST PUBLISHED 2:39PM, DEC 28 2020
I thought he was staying on in the Ryanair and he definitely stayed on really well there

Where was Dettori? Where were the Brits? Irish Champions Weekend felt too Irish Forgo the Flying Five in order to watch Snowfall? It can't ever happen again... 'This win is for him' - Joanna Mason picks up double on poignant day 'We have to try something' - McCullagh calls for false rail at Leopardstown Over €17 million wagered as Ireland's first Tote World Pool event proves popular Five-time Group 1 winner St Mark's Basilica holds on in front once again