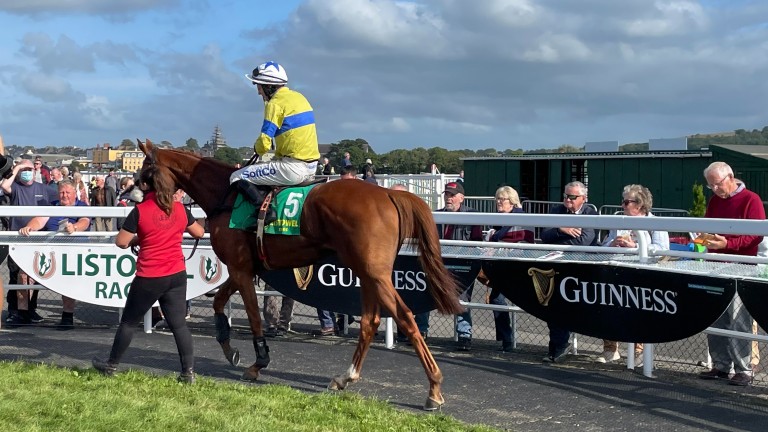 Whether it's on the Flat or over jumps, it doesn't seem to matter for Jessica Harrington as her incredible run of form continued with the victory of Autumn Evening in the feature Liam Healy Memorial Lartigue Handicap Hurdle on day two of the Listowel festival.

The 14-1 shot was given a confident ride by Sean O'Keeffe and gradually got the better of a good battle with topweight Dark Voyager from the second-last, kicking on to win the two-mile contest by four lengths.

The four-year-old could well feature in some of the better handicap hurdles later in the season and the trainer's daughter and assistant Kate Harrington said: "He got a nice break during the year, then came back and ran at Tramore. We just hoped we had him fit enough for today and it turned out really well."

She added: "This will probably be his minimum trip. He could step up to two and a half miles as the season goes on and hopefully he'll be competitive in those good handicaps. We'll try to win on the Flat with him too before the season is out."

Davy Russell got up from his sickbed to ride in the opening mares' maiden hurdle, and after the promising Party Central scored in workmanlike fashion he promptly returned there. A bug in the Russell household apparently laid the former champion jockey low, but he showed the hunger to ride good horses and winners is as strong as ever.

Party Central did not jump that well and took a really good blow afterwards, but she got the job done at odds of 4-7. "It was a nice performance and Davy said there's plenty of improvement in her," said trainer Gordon Elliott.

"We knew she was only just ready to start off, so we're delighted with her. We might go now for the good mares' hurdle at Down Royal next month."

Elliott took the next race as well when the mostly frustrating I A Connect made a winning debut over hurdles in the 2m auction maiden under Jack Kennedy. He showed a decent attitude to hold off the persistent challenge of Chicago Time by a short head.

FIRST PUBLISHED 6:47PM, SEP 20 2021
He could step up to two and a half miles as the season goes on and hopefully he'll be competitive in those good handicaps