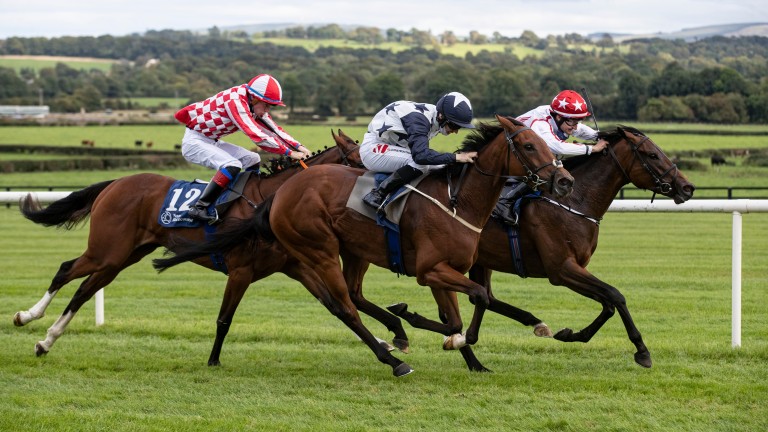 The storming form of Jessica Harrington's string, which was kicked off by three winners at Leopardstown on Saturday, continued with another treble on this all two-year-old card.

The opening fillies' maiden was transformed when favourite Pirate Jenny was withdrawn having been unruly in the stalls, and it was the Harrington-trained and Kirsten Rausing-owned Sablonne who took advantage under Shane Foley to score by a length.

"She's a laid-back filly and loved the ground. I think she'll be a nice sprinter for next year and we might go for a Listed race somewhere next," said Harrington.

The double came up when Scott McCullagh landed the mile nursery on Bellabel, who strode clear inside the final furlong to score by two and a half lengths from the staying-on Inchiquin Star.

The daughter of Belardo is owned by the all-female friends and family syndicate It's All About The Girls. "They've been tremendously lucky," said Harrington.

"That's the third winner they've had at Naas. They have two horses every year and have had two winners this year, Tut Tut and her. It's great. The sales are coming again and they'll go for a couple more for next year."

The 55-1 treble was completed by Alpha Racing's Eurocrat in the 7f auction maiden, giving Shane Foley a double as he held off the persistent challenge of newcomer Corporal Violette by a neck.

Fozzy Stack could have some good days to come with Red Lacewing after the No Nay Never filly ran out a narrow winner of an informative 5½f maiden.

The speed in her pedigree is matched by her pace on the track as she overcame a sluggish exit from the stalls that left her quite far back in the field past halfway. She showed a smart turn of foot to get to the front under Andy Slattery and did enough from there to hold off the more imposingly built New York City by a head. The old adage that a good big 'un will always beat a good little 'un did not quite bear out this time.

This filly is the last produce of her dam Mala Mala, who was placed in the Moyglare Stud Stakes and Cheveley Park Stakes and is a half-sister to the stable's Irish 1,000 Guineas winner Tarascon.

Stack said: "She ran well first time at Navan and she's probably going to be a sprinter. She's well bred and it was important to get a win from her. There's a Listed race at Dundalk, the Legacy Stakes, and there's one at Newmarket at the back end, the Bosra Sham Stakes, and she might go for one of those."

FIRST PUBLISHED 7:03PM, SEP 16 2021
The sales are coming again and they'll go for a couple more for next year