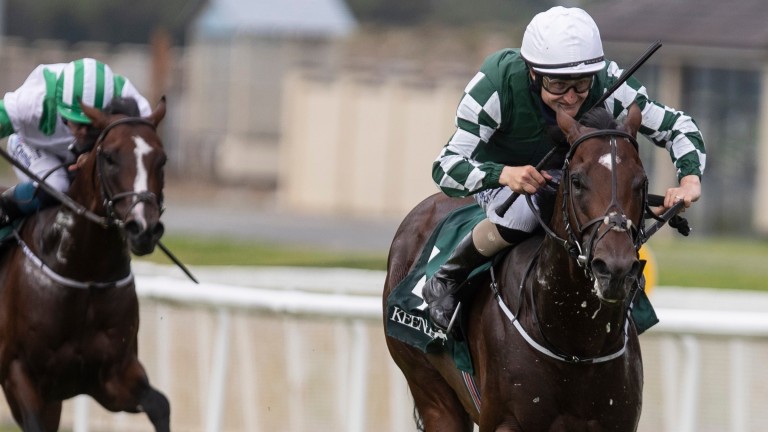 A ninth Group 1 for Jessica Harrington, only her second with a colt, mind. A fifth for Shane Foley. A first for owner Zhang Yuesheng.

The Keeneland Phoenix Stakes had a wide open look to it beforehand. Nine of the ten runners had won previously and the only one who had not, St Mark's Basilica, was sent off favourite.

There was the Norfolk winner, the Molecomb winner, the 1-2 from the Railway Stakes and the Prix Robert Papin. It looked a quality renewal.

If that was the case, then we witnessed something very special indeed as Lucky Vega ripped up the pre-race script by turning the first Group 1 juvenile contest of the season into a procession. It was even more impressive than the three-and-a-half-length winning margin suggests.

Foley sat motionless two furlongs out. So smooth was his journey to that point that you thought there must be a few potholes to come in the closing stages. Group 1s are rarely won so easily.

Only this one was, as the response was instant once he tapped the accelerator and Lucky Vega coasted home in splendid isolation. He is now 16-1 for the Qipco 2,000 Guineas with Paddy Power.

Harrington said: "That's Mr Zhang's first Group 1 winner worldwide, so I'm thrilled for him. I'm absolutely delighted for the horse too. He's nice and Shane said he's getting quicker all the time."

So, how come he could only finish second to Laws Of Indices in the Railway Stakes last month then? That form was emphatically reversed here. 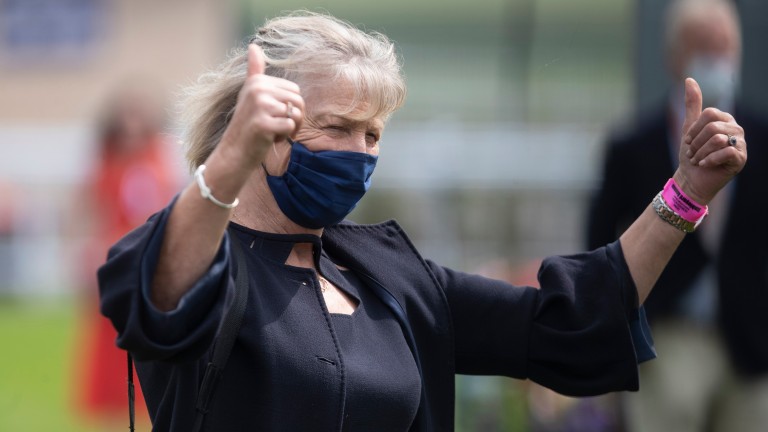 Jessica Harrington: "He's coming back to a mile and he likes Leopardstown so hopefully he can go well."
Patrick McCann (racingpost.com/photos)

The winning trainer replied: "He probably needed it the last day because he had won his maiden without getting into a battle. The last day, when he got into a bit of a battle, it just hardened him up. He was much more streetwise and, on his work at home, he had really started to come to himself.

"We thought he was working well but you never know until you go racing and everyone said this was a strong renewal of the Phoenix."

The Juddmonte Middle Park Stakes at Newmarket on September 26 looks like it is next on the agenda for Lucky Vega.

"We'll have to sit down and have a think about where to go now, but Shane said we should probably be thinking about the Middle Park. I think he'll get seven as well," Harrington added.

"Last year was all about the fillies so it's great this year to come up with a good colt." 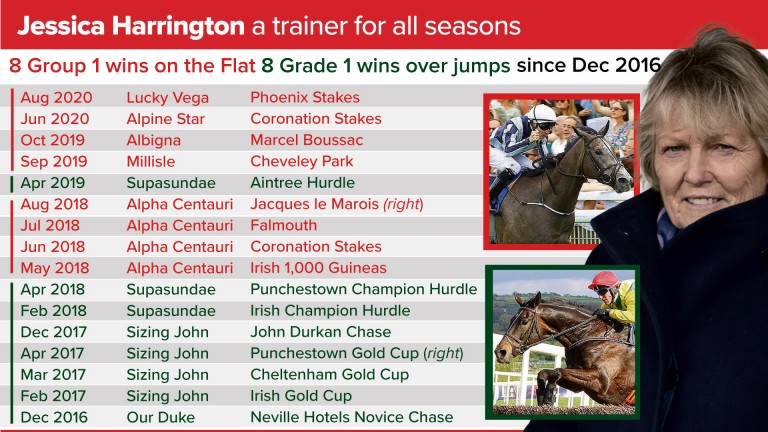 The battle for second and third was much tighter. Aloha Star passed the post a short-head in front of The Lir Jet, but the stewards deemed there was sufficient interference for those placings to be reversed.

The big disappointment of the race was the previously unbeaten Steel Bull, only recently bought by Chantal Regalado-Gonzalez, who trailed in seventh of the ten runners.

There was a valid reason for the subdued showing, however, as trainer Michael O'Callaghan reported that the impressive Molecomb winner banged his head in the stalls and knocked out two of his teeth.

Steel Bull would have needed to produce something spectacular to beat Lucky Vega though, as the son of Lope De Vega looks every inch a Classic contender.

Pinatubo showdown could be next for Space Blues after Gheest glory

Members' Club: Back to reality for Regal with no Enable or Ghaiyyath in his way

FIRST PUBLISHED 3:25PM, AUG 9 2020
We thought he was working well but you never know until you go racing and everyone said this was a strong renewal of the Phoenix

Spectacular backdrop on the watered gallop as Fooraat cuts through the mist Derby disappointment Emissary finally delivers on east coast mission It's oh so quiet but Search For A Song gives Weld something to shout about 'Hugely exciting Thunder Moon is a deserving 2,000 Guineas favourite' Harrington's Cayenne Pepper far too hot for Blandford Stakes rivals Song finds her tune as Weld and Orr get it right on the night in Irish St Leger