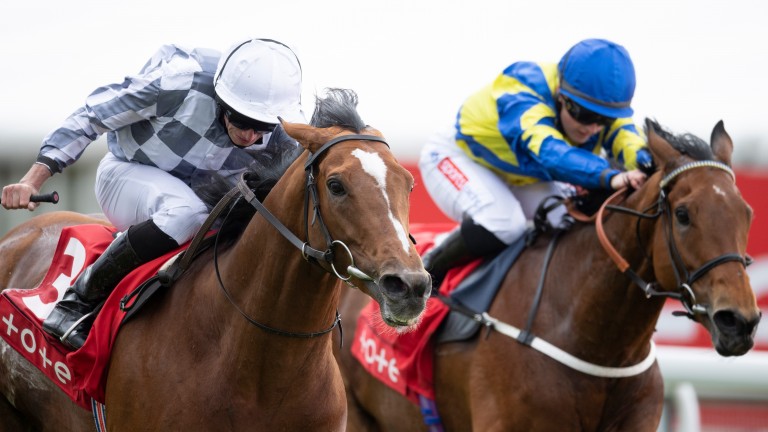 Class and a 5lb penalty made the difference as the oddest of couples fought out the finish of the Group 3 Ormonde Stakes.

In the summer of 2019, Japan won the Grand Prix de Paris and the Juddmonte International for Aidan O'Brien, while the Alan King-trained Trueshan won Class 5 races at Wolverhampton and Ffos Las.

While one found things tougher since, the other made relentless progress and there was just three-quarters of a length separating them here, with Japan taking advantage of the weight he received to score for the first time since winning at York in August 2019. 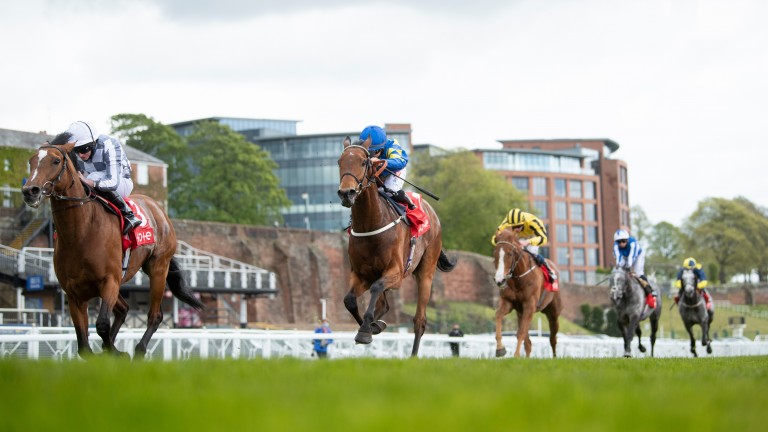 "He's a beautiful horse we've always held in high regard," said the winning jockey Ryan Moore. "He won a Juddmonte. Last year was tough for him but hopefully that'll give him a bit of confidence and he'll come on for the run.

"He doesn't really enjoy that dead ground and the trip is as far as he wants to go. He's got a great mind. Hopefully that's a good omen."

Japan holds three Group 1 entries, and Moore added: "I'd say the Coronation Cup is a possibility – he ran well in the Derby – and he'll be in the frame for a lot of the bigger races later on in the year."

The trainer's attempts to run his Ascot Gold Cup hope earlier this spring were thwarted by unsuitably quick ground at Nottingham and Ascot, and he said: "I'm thrilled to bits with him.

"It's been worrying me that he's been ready to run for the last three or four weeks – we were going to go to Nottingham and then Ascot and I wasn't sure I could hang on to him for much longer. It was lovely to get a run into him and I was thrilled with the way he's run.

"It's a good start. I was actually fairly relaxed today because it was a prep and it was a big ask giving weight away."

Trueshan did not get the run of the race either and jockey Hollie Doyle added: "He missed the beat a little bit out of the gates and I had to ask him to jump and it probably lit him up a bit before we got some cover. He probably wasn't at home 100 per cent on this track. There are big things to come from him."

Trueshan is a 9-1 shot (from 10-1) for the Gold Cup with Paddy Power but King stressed his participation depends on the ground.

Jason Hart capitalised on his plum draw in stall one with an all-the-way success aboard 5-2 favourite Jabbarockie in the 5f handicap.

The jockey won on the Eric Alston-trained sprinter at Musselburgh last month and was able to maintain the partnership after his original mount, Lord Riddiford, was a non-runner.

"When you get drawn one round here it makes life a hell of a lot easier," said Hart. "He winged the gates and I expected to have a lot more pressure on us, but he's getting quicker and that was a better performance than Musselburgh."

Tom Dascombe scored on the opening day of his local track's big meeting and followed up with a one-two in the two-year-old maiden.

Mercurial, ridden by Hayley Turner fresh from ITV duties, pipped stablemate Russellinthebushes for the trainer, who stressed the importance of this week.

"About 12 years ago, Michael Owen asked me to come up here and train at Manor House Stables and one of the criteria was you've got to get winners at Chester," he said.

"We've had very few runners this week but we've had a couple of winners. It matters a lot at your local track. We train for a lot of local people that want to see their horses run."

Aidan O'Brien expects sharper High Definition for Irish Derby Can any challengers defeat Aidan O'Brien's four-strong squad in Oaks Trial? Listed success for Katara rounds off a memorable weekend for Ryan Moore A step too far? O'Brien comments suggest Melbourne Cup dominance about to end Hussey shines as Iowa mows them down for Ulster Derby success 'He could be a Guineas/Derby horse' - O'Brien excited by Point Lonsdale