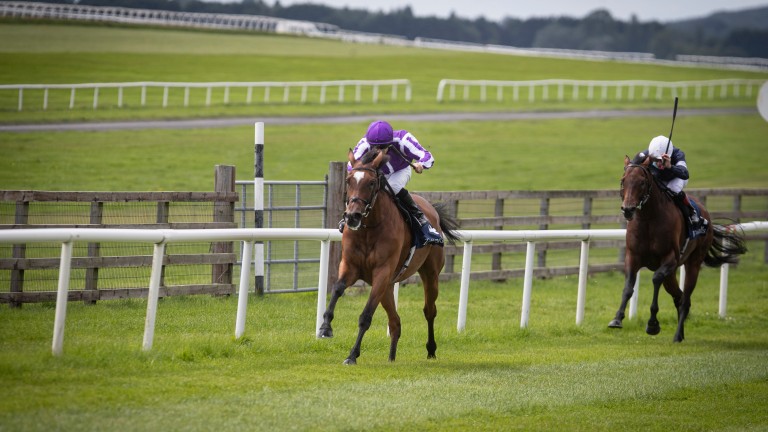 A Group 1 that should have been run two months earlier, a mare who was supposed to be in the breeding shed, an absent trainer and a jockey making the most of another Covid-19-inspired opportunity.

The 2020 Tattersalls Gold Cup was unconventional in many respects, although not in its outcome. Magical was sent off a red-hot 2-9 favourite to secure back-to-back wins in the mile-and-a-quarter Curragh contest, and she did not disappoint.

She might not have been as flamboyant as she had been on her Pretty Polly Stakes reappearance, or when running out a seven-length winner of this race in 2019, but she was utterly professional.

With the coronavirus quarantine restrictions keeping Ryan Moore at Ascot and Seamie Heffernan – who did the steering over course and distance 28 days earlier – suspended, it fell to Wayne Lordan to ensure the brilliant five-year-old’s latest assignment went to plan.

Lordan, riding Magical for just the second time, was not going to be a hostage to fortune. He promptly went about setting the fractions to suit himself, with Buckhurst and Leo De Fury tracking him.

As they swung into the straight with less than half a mile to run, Lordan gradually began to wind up his mount. While Magical did not conjure anything particularly spectacular, the chasing duo could not live with her when Lordan gave her a couple of flicks a furlong out. 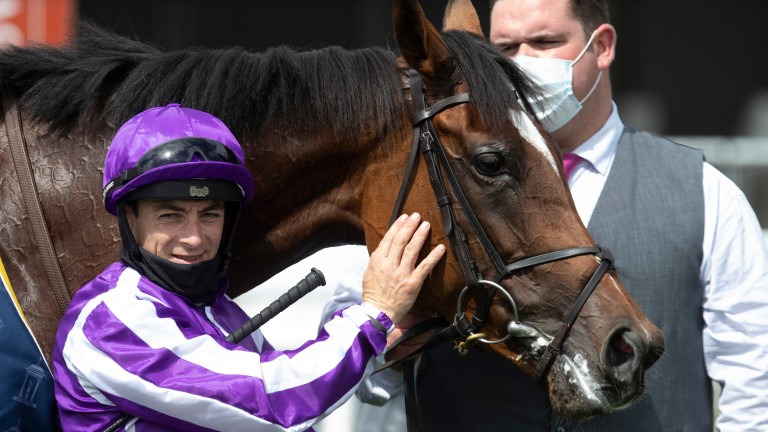 Aidan O’Brien's daughter of Galileo scored by two and a quarter lengths as Sir Dragonet and Search For A Song, who sat together in the rear early on, came through to pick up the pieces in second and third, with Armory keeping on for fourth.

In a season being lit up by Magical, her nemesis Enable and stable-mate Love, the Curragh’s decision to have Cyndi Lauper's Girls Just Want to Have Fun as the soundtrack for her walk back in was apt. As another of racing's marquee events took place without a paying customer in sight, that at least made for a fleeting, if contrived, relief from the sterility of sporting life as we now know it.

"She is a great mare," said O'Brien on the phone subsequently, missing out here due to a two-week suspension following his Covid-19 breach on the night of the Irish 2,000 Guineas.

"The only reason she is here now is because of the progress she made over the winter and she had progressed again from the Pretty Polly, so we are delighted the lads kept her in training."

This was O'Brien’s ninth win in the race and Magical’s sixth at the highest level. With Love being aimed at a Knavesmire showdown with Enable in the Yorkshire Oaks, the Juddmonte International could be next for Sunday’s dominant heroine, although she could wait for the Irish Champion Stakes, which she also won in 2019.

View the result and replay of the Tattersalls Gold Cup here

O'Brien suggested the same ten-furlong Group 1s will be considered for Sir Dragonet, who turned the tables on his Alleged Stakes conqueror Buckhurst in finishing second for a fourth time in succession.

Lordan previously rode Magical in the 2018 Prix de l’Arc de Triomphe, in which she could yet cross swords with Enable once more. Paddy Power were among the bookmakers to leave her unchanged at 14-1 for the autumn Longchamp feature, although Unibet opted to trim her to 12-1 from 16.

"It’s a treat to get a ride on a filly like her," Lordan beamed.

Of the less emphatic style of victory compared to her Pretty Polly rout, he added: "She zinged along in front last time. Today she was a little bit more relaxed, and I’d say that was the only difference. I felt if anyone was going to get to me, it was going to help me. From the minute you sit on her until you get off her, she feels like she has a presence. She is a high-quality filly."

'That was just fantastic' - Harry Eustace enjoys his first winner as a trainer Classic pictures look reassuringly familiar after fascinating trials Please run him, Aidan. Don't remind me why I gave up ante-post betting From 33-1 to 7-4: Santa Barbara is a strange but fascinating Guineas gamble Lancaster House is the master as O'Brien and Moore dominate with four-timer Can Craven winner Master Of The Seas follow up in the 2,000 Guineas?