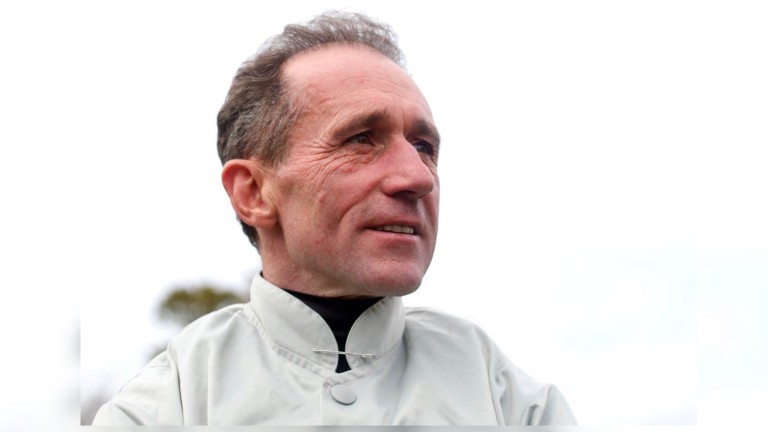 John Egan: matched son David's double at Doncaster with two of his own at Chester
Patrick McCann (racingpost.com/photos)
1 of 1
By Andrew Dietz UPDATED 7:12PM, SEP 11 2021

Like father, like son. On a memorable day for his family, jockey John Egan matched his son David's achievements at Doncaster by riding a double headlined by Invite in the Listed Stand Cup.

As well as winning the Tote-sponsored feature race, Egan took the 5f nursery on Russellinthebushes and watched on with interest as his son rode two winners on Town Moor, including in the Champagne Stakes on Bayside Boy.

"It's brilliant for David, I won the Champagne Stakes a few years ago when dead-heating with Jamie Spencer [on Close To You in 2005]," said Egan, 53. "It's been a fantastic day, I love watching him ride winners and obviously I like riding them myself."

Egan came with a sweeping run on the Andrew Balding-trained Invite to beat stablemate and favourite Alounak and make up for the frustration of a wasted trip to Italy last time.

Sent off the 5-4 favourite for the Italian Oaks in June after winning by ten lengths at Doncaster the time before, Invite finished a well-beaten fifth having lost her race in the preliminaries.

"She went a bit wayward with me in Italy because we had to take the hood off as we were going out in the parade," added Egan. "The key to her is keeping her quiet. Once you can keep a lid on her, she's pretty good.

"I knew getting on her we were going to run a good race because she was so relaxed. It was all down to the girl who led her up and people who looked after her beforehand."

The Team Valor-owned Invite was cut to 16-1 (from 50-1) by Paddy Power for next month's Qipco British Champions Fillies & Mares Stakes.

The ultra-durable Hochfeld made his 15th start since April in the 1m6½f handicap and was agonisingly denied victory by the strong-finishing Au Clair De Lune, who prevailed by a neck.

The George Scott-trained winner would have been deemed an unlucky loser and jockey Hayley Turner said: "She's a very adaptable filly because she was trapped wide and I switched her to the inner and then we had to barge our way out. She made it very easy for me."

FIRST PUBLISHED 6:12PM, SEP 11 2021
I love watching him ride winners and obviously I like riding them myself