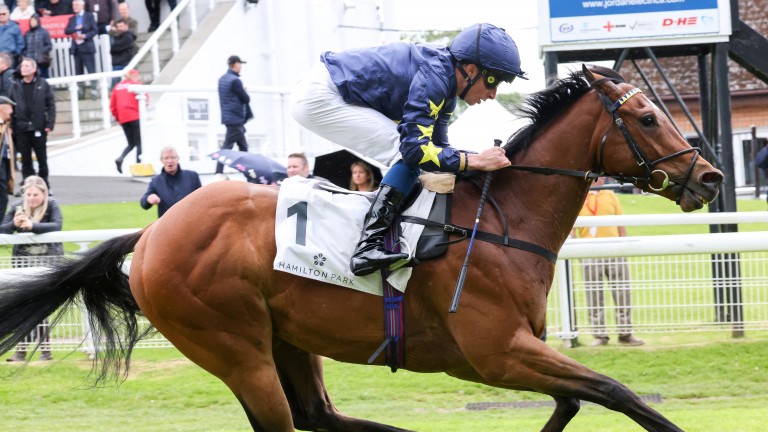 Inver Park: could line up at Royal Ascot next month
John Grossick (racingpost.com/photos)
1 of 1
By Charlie Huggins UPDATED 7:30PM, MAY 25 2022

George Boughey and William Buick’s decision to make a rare trip to Hamilton paid off when Inver Park secured back-to-back wins in the feature 6f handicap to book a possible trip to Royal Ascot next month.

Buick, who had not ridden at the Scottish track since September 2012, was caught late by the Paul Hanagan-ridden Rock Opera in the preceding 5f maiden on board Mark and Charlie Johnston's Explicit, but the Godolphin rider was soon in the winner’s enclosure as he helped Boughey’s four-year-old follow up last Monday’s win at Windsor.

"It was a good effort, he handled the track well," Boughey said of the son of Pivotal. "He’s improving with racing and age and he could go to Royal Ascot if he gets into either the Buckingham Palace or the Wokingham. We’ll see what happens on Tuesday but he should get in the Buckingham Palace."

Boughey shared a plane with Buick to Scotland and the pair struck in the closing 1m1f handicap with another son of Pivotal as Simply Sondheim scored on his handicap debut and a first start since being gelded, to extend the Classic-winning trainer’s unbeaten record at the track to three.

The victory also completed a treble on the day for Buick, who had earlier helped Jim Goldie complete a hat-trick of his own with Shine On Brendan landing the first division of the same handicap.

Rory took the opening 5f apprentice handicap under Amie Waugh as part of a one-two for Goldie before the Callum Rodriguez-ridden Wickywickywheels got off the mark at the sixth time of asking in the 1m3f handicap.

FIRST PUBLISHED 6:15PM, MAY 25 2022
We’ll see what happens on Tuesday but he should get in the Buckingham Palace

Hamilton forced to abandon race and delay others as unsafe ground woes return 'We knew she was good' - Shandy Star denies Buick a four-timer in feature Hamilton Placepot picks: Robbie Wilders heads to Scotland for a two-line perm Is Austrian Theory the answer for Mark Johnston or is it a Goodwood warm-up? Boughey targets return to Group company for Oscula after Listed triumph