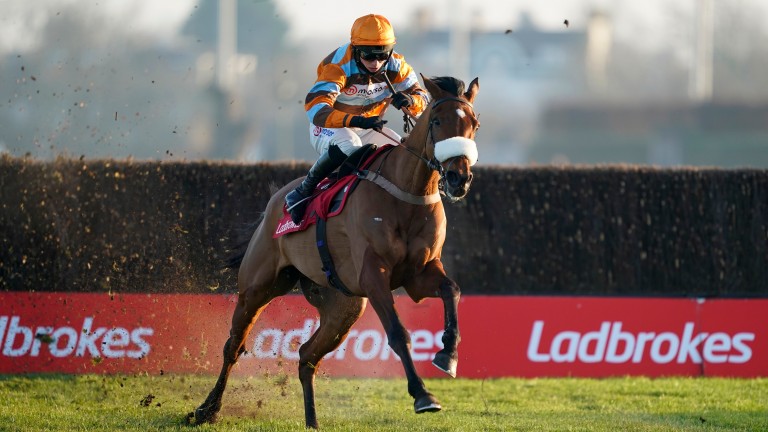 Master Tommytucker righted the wrongs of his past two visits to Kempton with an easy success in the Silviniaco Conti Chase to give Paul Nicholls a remarkable seventh winner of the day across Britain.

The race lost a lot of his competitiveness when favourite Imperial Aura unseated David Bass early on but that did not inconvenience the front-running Master Tommytucker.

Despite making a shuddering mistake at the final fence, he stayed on his feet and cantered to victory on what has been a memorable day for the Dicheat trainer.

"I was thinking 'you silly, silly boy'," a relieved Cobden said after the race. "He did bloody well to stand up there, it could've been a Might Bite incident from all those years ago.

"He's easier to ride when the ground is heavy because you're going a little bit slower. We were going a fair bit faster today and you're trying to keep the bit in his mouth, but at the same time leave him to do the jumping without telling him what to do.

"He's got some engine and on days like today, he's a really good horse." 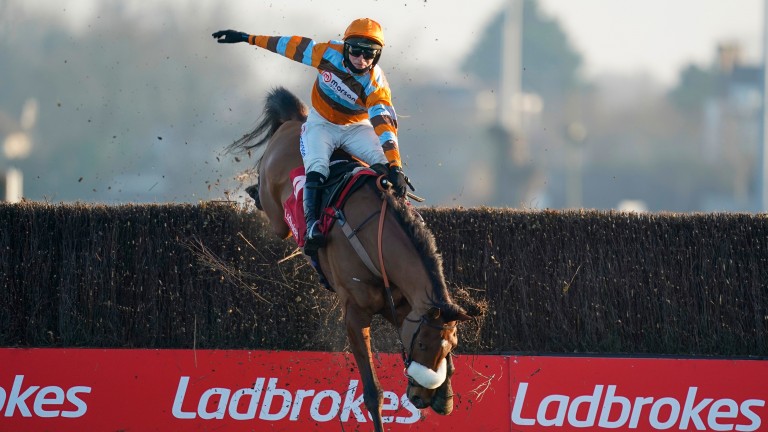 Hold on tight: Harry Cobden had to display some cowboy-riding talents to keep the partnership with Master Tommytucker intact at the final fence
Alan Crowhurst (Getty Images)

The ten-year-old got off the mark in his chasing career at the track in November 2019, but fell at the fourth-last fence in two subsequent starts at Kempton in the Kauto Star and Pendil Novices' Chase's before his Silviniaco Conti Chase victory.

Another tilt at the top level could be next on the agenda for Master Tommytucker, who was trimmed into a best-price 25-1 for the Ryanair Chase with Betfair Sportsbook, but the trainer could target his winner at different festivals during the spring.

Watch the replay of the Silviniaco Conti Chase here

"He's a hugely talented horse, but a real challenge," Nicholls said, who gained a second win a row in the race following Frodon's victory last year. "He's got his act together now though and I'd love to win a Grade 1 with him.

"The Ascot Chase is a race that would suit him, but I think the Ryanair might rush him off of his feet. The Melling Chase may be a good race for him as I'm sure he's better on a flat track. All being well next year I'd love to have a crack at the King George with him as this track suits him well."

Kim Bailey told ITV Racing that Imperial Aura was seemingly none the worse following his unseat, and he drifted out to 7-1 (from 6) with Betfair Sportsbook and 6-1 (from 5-1 joint-favourite) with Paddy Power for the Ryanair Chase.

FIRST PUBLISHED 3:06PM, JAN 9 2021
He did bloody well to stand up there, it could've been a Might Bite incident from all those years ago