'I was pleased with what I could see!' - Duke Of Luckley leaves it late in fog 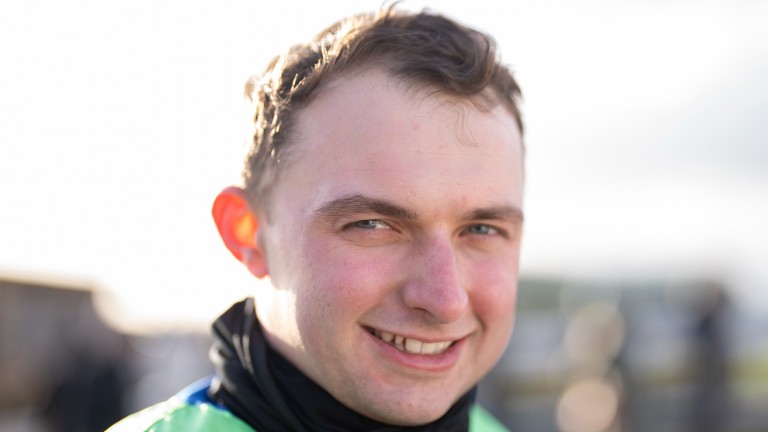 Sean Bowen: started the week with a double from his only two rides at Catterick
Edward Whitaker (racingpost.com/photo)
1 of 1
By Charlie Huggins UPDATED 6:36PM, NOV 28 2022

An inspection called prior to the seven-race card due to severe fog was passed to the delight of trainer Martin Keighley, whose Duke Of Luckley emerged from the clouds to strike late on his chasing debut.

The five-year-old, who had been pulled up when sent off favourite at Uttoxeter when last seen in June, had just one of his five rivals in the 1m7½f novice handicap chase behind him approaching the final furlong, but stayed on well under Sean Bowen to secure a winning start over fences.

"I was really pleased with what I could see of the race," said Keighley. "It’s a bit sharp around Catterick and he probably wants a bit further. Sean said he jumped fantastic and he was always going to be a better horse over fences so hopefully there’s plenty more improvement to come from him.”

Forecast, Keighley’s other runner on the card, could manage only third in the feature 3m1½f handicap won by Mark Walford’s Johnson’s Blue.

Duke Of Luckley's success brought up a double for Bowen, who helped Artistic Choice land the opening juvenile contest for Michael Bell, supplying the Derby-winning Newmarket trainer with his first winner over hurdles since September 2016.

Royal Mogul was collared late by subsequent Cheltenham Grade 2 runner-up Ukantango on his hurdling debut at Wetherby last month, but went one better in the 2m3½f maiden hurdle to score on his first start since wind surgery for Brian Hughes and Donald McCain after being sent off the 4-7 market leader.

Sleeping Satellite also justified favouritism in the bumper to complete doubles for Hughes and McCain.

FIRST PUBLISHED 5:00PM, NOV 28 2022
Sean said he jumped fantastic and he was always going to be a better horse over fences so hopefully there’s plenty more improvement to come from him