'I thought we might have him': Dods thrilled with Que Amoro's Nunthorpe effort 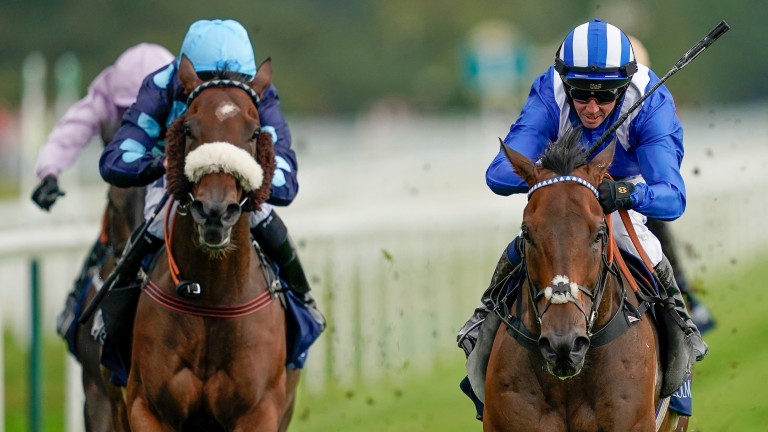 Sprinters possessing the speed to lead Battaash are nearly as rare as the proverbial hens teeth, yet there is little question that Que Amoro gave the champion sprinter and all connected one of the frights of their lives by setting a blistering pace, before having to settle for an honourable second.

Trainers tend not to like being pigeon-holed, but with dual Nunthorpe winner Mecca's Angel and Prix de l’Abbaye winner Mabs Cross both through his hands in the last few years, not to mention Easton Angel, Intense Romance and Dakota Gold, Michael Dods probably would not complain at being described as a master trainer of sprinters. Que Amoro, whose career could still be in its infancy, looks a worthy addition to that impressive list.

Dods was understandably thrilled with 22-1 chance Que Amoro and for a moment or two, like the rest of us, he thought that she had the world's best sprinter in trouble.

"Jim [Crowley] was clever as he came over and intimidated her a little bit. She likes a bit of her own space and she would have preferred faster ground.

"She’s seriously quick. When she ran here the other week we half saved her to get home because the ground had gone a bit, but I told Paul [Mulrennan] today to take no prisoners and just let her go. That’s the way to ride her - burning horses off."

Next stop is likely to be the Prix de l’Abbaye at Longchamp, in which Mabs Cross had a below par Battaash back in fourth two years ago, but Que Amoro will need to be supplemented.

Dods explained: "With so much going on we decided we wouldn’t put her in and wait instead to see if she ran a big race and then supplement her if she did. I should think that’s probably where she will go now."

FIRST PUBLISHED 5:55PM, AUG 21 2020
To get that close to a horse like Battaash was a hell of a performance, and for a moment I thought we might have him