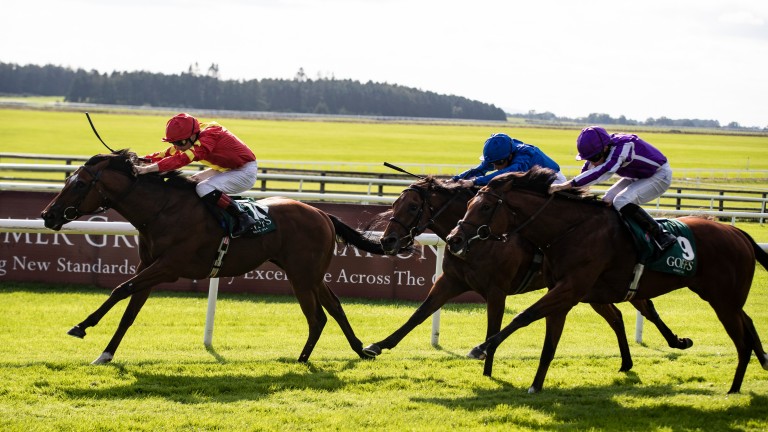 Thunder Moon picks up and stays on well under Declan McDonogh
Patrick McCann / racingpost.com/photos
1 of 1
By Racing Post staff UPDATED 10:03AM, SEP 14 2020

What do you make of Thunder Moon's 2,000 Guineas chances?

The National Stakes looked the strongest juvenile race of the season and the winner is hugely exciting. The barging match approaching the final furlong took out a couple of rivals, notably Lucky Vega, but Thunder Moon was virtually stopped in his tracks as well. To recover from that and blast past a colt of the quality of Master Of The Seas, the eventual fourth, was breathtaking. Even accounting for Battleground's absence from the National Stakes, Thunder Moon deserves to be the Guineas favourite.
Andrew Dietz, reporter

It was a remarkable performance because he was in trouble in traffic on the inside and produced an impressive burst of speed to snatch victory from the jaws of defeat. There were shades of Siskin in this year’s Irish 2,000 Guineas in the way he quickened and Thunder Moon evidently has plenty of speed, but his pedigree suggests he will stay a mile. The only negative is that it wasn’t the strongest running of the National Stakes in recent years and the two form horses, Master Of The Seas and Lucky Vega, appeared to run below form. I’m not convinced Wembley or St Mark's Basilica are top class and they filled the places.
Graeme Rodway, tipster

There will naturally be suspicion about the form of the National Stakes, with joint-favourites Master Of The Seas and Lucky Vega only finishing fourth and fifth. However, Thunder Moon did not exactly have a smooth passage and showed an impressive change of gear to exploit the gaps when they eventually opened. Quotes of 8-1 for the 2,000 Guineas are fair and he remains open to improvement after just two starts, a sentiment which cannot always be applied to winners of this race.
Matt Butler, reporter

FIRST PUBLISHED 7:09PM, SEP 13 2020
The only negative is that it wasn’t the strongest running of the National Stakes