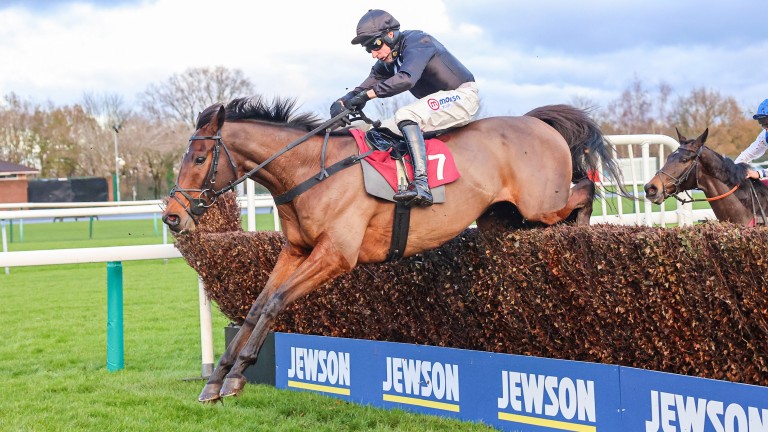 Blaklion on his way to winning the veterans' chase at Haydock
John Grossick (racingpost.com/photos)
1 of 1
By Andrew Dietz UPDATED 6:20PM, DEC 1 2021

Jockey Harry Skelton hailed Blaklion's tenacity after the soon-to-be 13-year-old ran out a popular winner of the veterans' chase.

Blaklion won at Grade 1 level in his pomp and had shown he was no back number for trainer Dan Skelton when faring best of the British in sixth in last season's Randox Grand National.

Racing off 14lb lower than at Aintree in April, Blaklion dictated matters and fought on gamely when challenged by Aso to record his first success since winning the 2017 Becher Chase for Nigel Twiston-Davies.

"He's a credit to himself. He's not overly big but he's got a lion heart and he deserves it," said Harry Skelton. "It was a massive day for him and he enjoyed that ground. He travelled away so sweetly and it was great to have him back like that. It's the best ride I've had off him."

Blaklion was bought for £300,000 by Darren Yates as a Grand National contender in early 2019, but missed that year's race due to an injury setback.

The owner said: "He was great today, when he travels like that he's very hard to pass. We had half an eye on the Grand National again this season, but they dropped him quite a bit, so he'd have to win again to get anywhere near getting in. While he's enjoying it, we'll keep him going."

Yates, who has spent vast sums of money without a great deal of return, added: "When I first started I bought a few and things didn't go very well, but they've turned and hopefully my luck has changed."

Russell on a roll

Wintry weather arrived in force to turn the ground heavy, but Readysteadybeau looked right at home in the conditions to keep Lucinda Russell flying high.

The five-year-old's victory in the maiden hurdle was the stable's third since Ahoy Senor lit up Ladbrokes Trophy day at Newbury with a brilliant display in the Grade 2 novice chase.

Russell said: "He's a lovely horse and we knew he'd like the ground. He'll make a cracking chaser and we'll be back here for those three- mile-two chases in the future."

The trainer is yet to decide whether Ahoy Senor will head for a potential clash with Bravemansgame in the Kauto Star at Kempton on December 26.

"We'll keep our options open - it will have to be pretty soft to go to Kempton - and there are also races at Warwick, Lingfield or Cheltenham," she said.

Lewis Stones put his local knowledge to good use as he struck on his first ride at the track on Macho Mover in the conditional jockeys' race.

The 25-year-old, from Ellesmere Port, spent much of his youth at Haydock and was thrilled with his riding debut here on the Olly Murphy-trained winner.

"It's absolutely fantastic as I came here a lot growing up, so to ride a winner here makes it even more special," said Stones.

"My dad would always take me here, Bangor and Aintree and kept me interested. He's come here straight from work and I'm glad he saw me ride a winner."

Four in a row

A Different Kind, a three-time winner at Sedgefield, extended his unbeaten record to four in the introductory hurdle.

The four-year-old was another winner for the red-hot partnership of Donald McCain and Brian Hughes, who said: "He's a horse we've always liked and we've made no secret of that. The ground was probably slower than ideal and it was a good enough performance."

FIRST PUBLISHED 6:00PM, DEC 1 2021
He travelled away so sweetly and it was great to have him back like that

'He deserves his spot in this race' - Grade 2 novice hurdle insight Toby Lawes excited about prospects of 'lovely' Ballyglass after bumper success Why the speed of disciplinary proceedings continues to frustrate Dan Skelton to be charged by BHA over horse sale as owners seek further censure 'Head-scratchingly convincing' - James Conheady among this week's winners Can Skelton and Henderson find the key to their promising hurdlers?