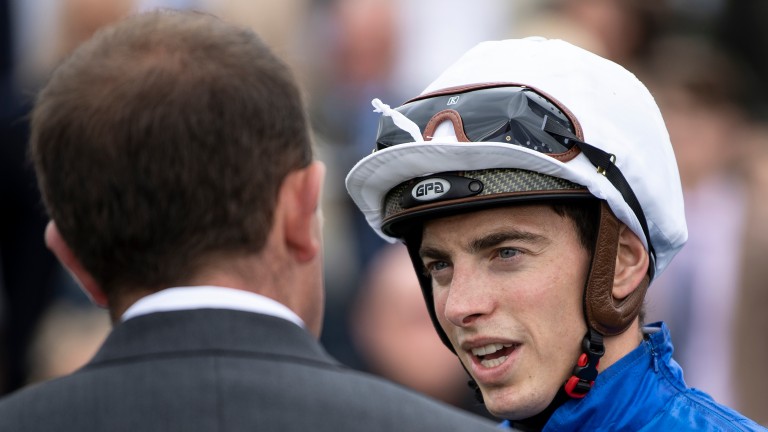 The Godolphin homebred is a half-brother to their Group 1 winning juvenile Ultra and made his experience count, having been a neck second on debut to Filistine at Newmarket last month.

Jockey James Doyle told Sky Sports Racing: “He had the experience going into today and was very straightforward. He bounced [out the stalls] nicely and I got a nice lead.

“It will be interesting to see which way we go with him trip-wise because he’s got a bit of zip and the sharp seven furlongs around here suited him. He travelled nicely and showed a nice kick.”

In the same race, joint trainers William Muir and Chris Grassick gave a debut to Stockpyle, a half-brother to stable star Pyledriver, and he shaped with plenty of promise, keeping on for an eyecatching second.

Doyle at the double

Half an hour later Doyle completed a double on the Simon and Ed Crisford-trained Saleymm in the 1m½f handicap. The three-year-old made light work of his rivals, bolting up by nearly five lengths.

Doyle said: “He’s a gorgeous type and the penny is really starting to drop now. It’s nice to see him back up what he’s been showing us at home.”

The jockey is operating at an impressive 40 per cent strike-rate with six winners from 15 rides in the last fortnight.

'It was a shame' - jockey misses out on winner after positive Covid-19 test Getting an edge at Meydan: your complete guide to the Dubai World Cup Carnival First Meydan runners for Alice Haynes on opening day of World Cup Carnival 'I'm sure there is more to come' - Chance continues Coakley's good form Drop to 3lb no problem for McEntee as apprentice bags a double Gamble landed as Charlie and Mark Johnston claim first winner on joint licence