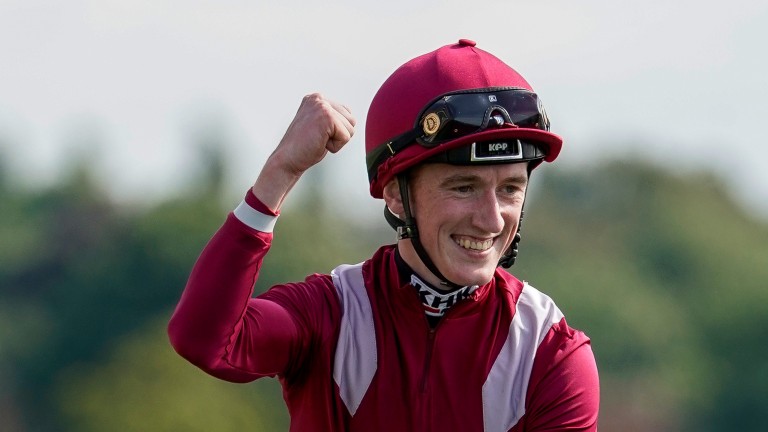 On a difficult day for the Roger Varian stable following the death of 2020 Ebor winner Fujaira Prince, newcomer Eldar Eldarov gave the yard something to smile about with an impressive victory in the second division of the 1m½f maiden.

The colt has a sparkling pedigree, sired by Dubawi and out of a Sea The Stars mare, and demonstrated hints of his own abundant talent with a dominant five-length victory under David Egan over Janoobi.

Having cost £480,000 at the breeze-up sales in May, the two-year-old was well supported on his debut and justified his starting odds of 13-8, with Egan unable to hide his delight at the performance post-race.

"He's a very exciting type," Egan told Racing TV. "For a breeze-up horse you like to see them do it that way round behind the bridle and the further up the straight he was going the better he was going.

"I couldn't pull him up and we went all the way round back to the stalls so it's a taking debut. After coming back from the breeze-ups it took a while to chill him out and I can only see a horse like him getting better as a three-year-old."

Karen Tutty set a new personal best for most winners in a year when promising filly Sweet Madness followed Redcar success last month with victory in the 1m½f nursery, partnered by the trainer's daughter Gemma.

The win was the 15th of 2021 for the North Yorkshire-based trainer from 87 runners, giving her a career-best strike-rate of 17 per cent.

FIRST PUBLISHED 6:00PM, OCT 13 2021
I couldn't pull him up and we went all the way round back to the stalls so it's a taking debut

Luxembourg leads the charge as youngsters bid to underline Classic credentials Mishriff ruled out of a crack at the Breeders' Cup in favour of Saudi Cup trip Four legs to four wheels: the former Cecil apprentice getting Newmarket moving 'There's no reason why he won't go on' - superstar Baaeed set to race in 2022 No running each other off the track here - but title battle is no less intense Glencassley turns back the clock as Hammond is denied on his return to course