'He jumped superbly' - Remastered masters his rivals to win the Reynoldstown 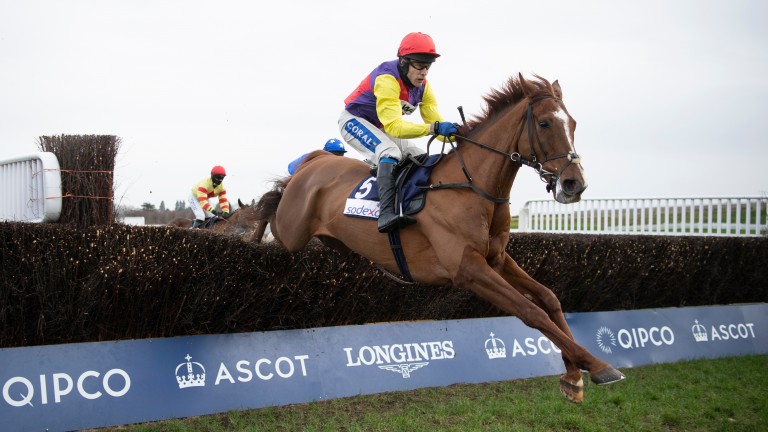 Remastered produced a lovely round of jumping to win the Reynoldstown under Tom Scudamore
Edward Whitaker (racingpost.com/photos)
1 of 1
By Matt Butler UPDATED 7:39PM, FEB 20 2021

On official ratings Remastered was bottom of the pile for the Bateaux London Reynoldstown Novices' Chase, but a superior round of jumping saw Brocade Racing’s eight-year-old leave Ascot a Grade 2 winner.

Tom Scudamore positioned Remastered to the head of affairs from the get go and while the challenge of his rivals faltered one by one, he kept producing the jumps required by his rider.

Demachine appeared to be travelling better under Richard Patrick in the home straight but when push came to shove the tank was empty and it was Remastered who found more, with another fine leap at the last fence sealing the biggest victory of his career.

Betfair Sportsbook cut Remastered into 20-1 (from 33) for the Brown Advisory Novices’ Chase after his success, but Scudamore will be leaving the Cheltenham deliberations to his boss David Pipe.

Scudamore said: “He’s unbeaten over fences so far but they’ve really made a man out of him. We thought an awful lot of him as a novice hurdler but it didn’t quite go to plan. It was a very taking performance today.

“His jumping was a real attribute around here, he jumped superbly. He’s got plenty of options [at Cheltenham], I think he’s entered in just about everything so I’ll leave that up to David. He’s only been to Cheltenham once before but he’s a different horse.”

The race was marred by the death of Sevarano, who was pulled-up by Jonathan Burke before the 13th fence but sadly suffered a heart attack. In other Ascot races Grade 1 winner L'Ami Serge and Yalltari also lost their lives.

A close-up fourth in the Leamington Novices’ Hurdle at Warwick last month, Midnight River was dropping in class and always seemed to be getting the better of £450,000 purchase Gallyhill. 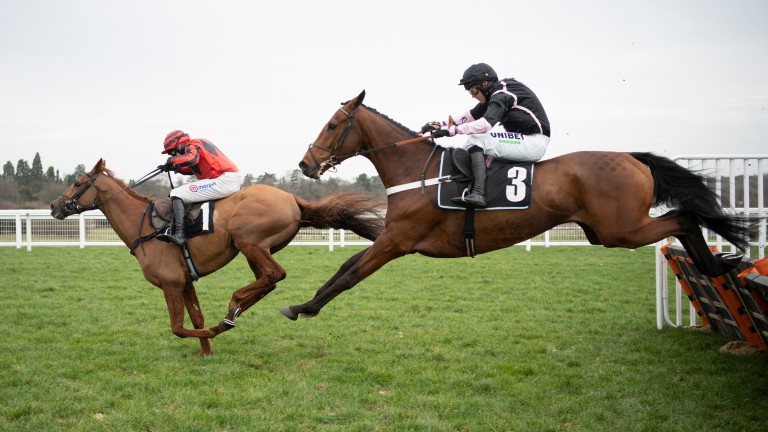 Harry Skelton said: “The owner, Mr McAleavy, is very straightforward to ride for and last year in bumpers we wanted to do things the right way. He’s getting the hang of it now.

“I really think the best is still to come. We see him as a three-mile chaser but he’s won three now over hurdles. I imagine he’ll have something thrown at him in the spring. We’re not in at Cheltenham, maybe we’ll have a look at Aintree, but he’s a horse we’ve always thought of as a chaser so that’s our main objective.”

The Skeltons doubled up when Captain Chaos put in a bold round of jumping to win the Swinley Chase, bravely seeing off fast-finishing veteran Regal Encore.

Captain Chaos and Harry Skelton had duelled with Cobolobo and Jonjo O'Nell Jr for most of the 3m handicap, but once the ten-year-old took it up three from home he had enough left to see off the admirable runner-up.

Skelton said: "He’s been a really good horse, he’s given his owners Mile and Eileen Newbould a lot of fun and still to be doing it at his age is fantastic.

"Me and Jonjo were very positive early and I went down the middle because he’s better with a bit of room like that, but we had a good old set to. We were chatting along down the back and we were both a bit long at the ditch and said we’re on the limit here.

"Regal Encore came at me late, but when he actually came to me he took off and I couldn’t pull him up. He was probably idling a bit. He’s a brave old horse and he deserves that win."

Shannon Bridge completed the day's haul for the Skeltons under another fine ride from the front in the 2m3½f handicap hurdle.

The winning jockey added: "My brother’s brilliant to ride for. He has complete confidence in me and the owners as well, they leave it to me. The horses are flying, they never stick me down to do one thing or another."

How big a factor will Goshen be in the Champion Hurdle? (Essential members)

FIRST PUBLISHED 5:45PM, FEB 20 2021
He’s got plenty of options [at Cheltenham], I think he’s entered in just about everything so I’ll leave that up to David