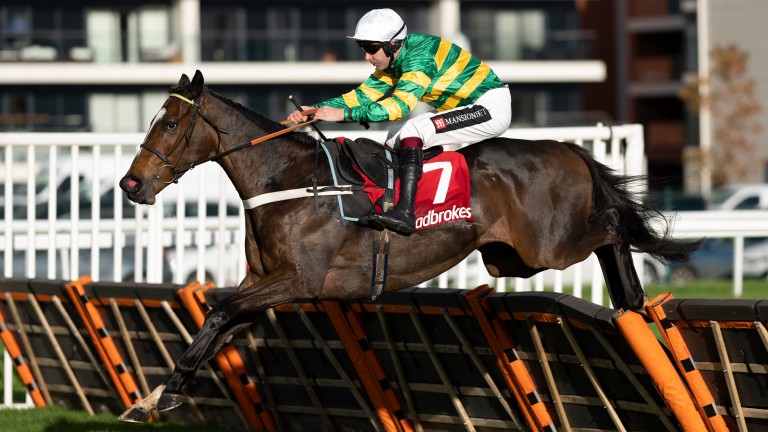 Jonbon, who has the pedigree, price tag and profile to be something out of the ordinary, added the performance when cruising to an impressive victory in the maiden hurdle, which saw him cut to as short as 3-1 for the Sky Bet Supreme Novices' Hurdle with Paddy Power and Betfair.

The five-year-old – a brother to the brilliant Douvan, an eight-time Grade 1 winner who captured the Supreme and Arkle at the Cheltenham Festival – landed a point-to-point in November last year before leading owner JP McManus splashed out £570,000 to buy him.

That figure made him the most expensive pointer ever sold at auction and he was put into training in Lambourn with Nicky Henderson, who saddled him to win a bumper at Newbury in March. 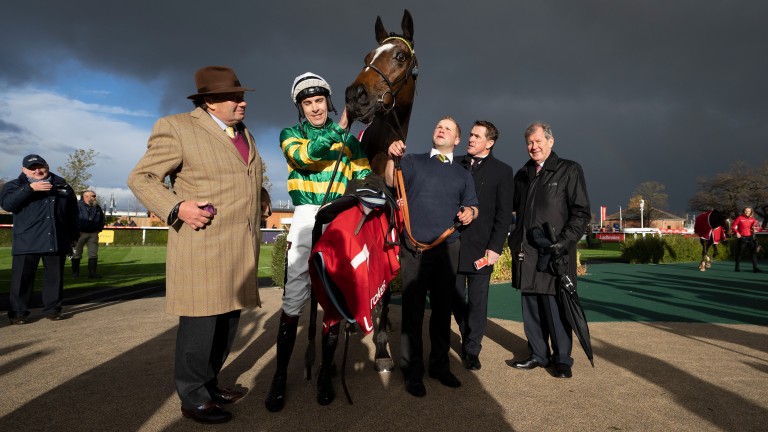 Reported to have done well physically over the summer, Jonbon lined up in a race that Henderson has won four times in the last seven years, including with Buveur D'Air, a subsequent dual Champion Hurdle hero.

The son of Walk In The Park was ridden by Aidan Coleman, who had replaced Nico de Boinville after he was hurt in a schooling fall at Henderson's Seven Barrows base on Thursday morning.

He had way too much class for his rivals and Henderson said: "He's a brother to Douvan and unsurprisingly he's got plenty of boot.

"He was on his toes and I call him a fidget, which is why we get on, but he doesn't do anything wrong."

The stewards held an inquiry to determine if any of the jockeys had done anything wrong as almost a minute elapsed before they started racing.

No action was taken and Henderson added: "I'm not surprised his Supreme odds were cut; they were bound to if it went well today.

"I probably over-tied Aidan with instructions. He asked if he could lob along as there was no pace in the race, but I said, 'No, please not today as, whatever happens, we've got to teach him to drop it and he did, really nicely. He only got to the front because he jumped his way there – he was in second gear."

Gary Moore has taken plenty of rough with the smooth in his lifetime in the sport and admitted luck was well and truly on his side when Nassalam added his name to the Grade 2 novice chase's rich roll of honour.

The list includes subsequent Cheltenham Gold Cup aces Denman, Bobs Worth and Coneygree, but Moore might not have anticipated a post-race winning interview when Harry Cobden and Pic D'Orhy looked to be turning the screw on their three rivals rounding the home turn.

Pic D'Orhy took a crashing fall four out, however, and that handed the initiative to Millers Bank, who then spectacularly unseated Harry Bannister two out.

That left Nassalam, ridden by Moore's son Jamie and racing in the silks of John Stone, to stroll home 30 lengths clear of Tea Clipper, the only other finisher. 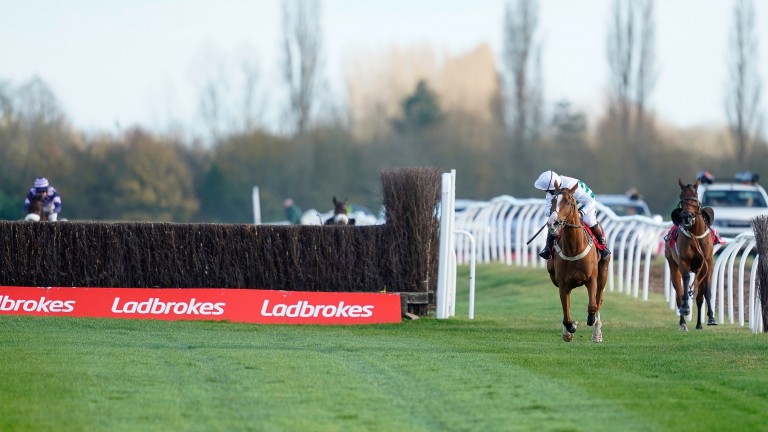 "I thought Harry had me cooked turning in," said Jamie Moore.

"I actually thought I could take Millers Bank with one run but then he tipped up. We just got lucky, simple as that."

His father concurred. "We had luck on our side for a change," said the trainer, who recently celebrated his 1,000th jumps winner.

Seven-horse Herefordshire trainer Matt Sheppard took a break from writing his memoirs to win the 2m½f novice handicap chase with Not Available, ridden by son Stan.

The race honours jumps titan Fulke Walwyn and an emotional Sheppard savoured the success in front of the ITV3 cameras.

He said: "I call it a sport, not an industry. To win a race at a big meeting, especially with my son riding, means a lot.

"I've got this thing about slow two-milers and he's the slowest horse in the world at home, but he's a two-miler!"

Sheppard's penchant for that type of horse manifests itself in the book he is penning.

"It's called Slow Two Miler. It's all true and I hope to publish it before Christmas next year."

'How can you be wrong?' – Nicky Henderson hits back at Shishkin critics

Fantasy Ladbrokes Trophy: who would win if the best from the last 20 years met?

Will a return to Newbury spark a revival for former winner Django Django? Our man advised 4-1 and 7-2 winners in the last week and is back with four bets Newbury Placepot tips: Graeme Rodway gave a winning perm at Chepstow on Monday 'He'll sneak in off a nice weight' - Betfair plan for Constitution Hill victim We all like to get carried away - and it's easy to do so with Constitution Hill Cheltenham Festival hope Might I set for potential clash against unbeaten Jonbon