Haparanda takes advantage of a good opportunity in Oyster Stakes 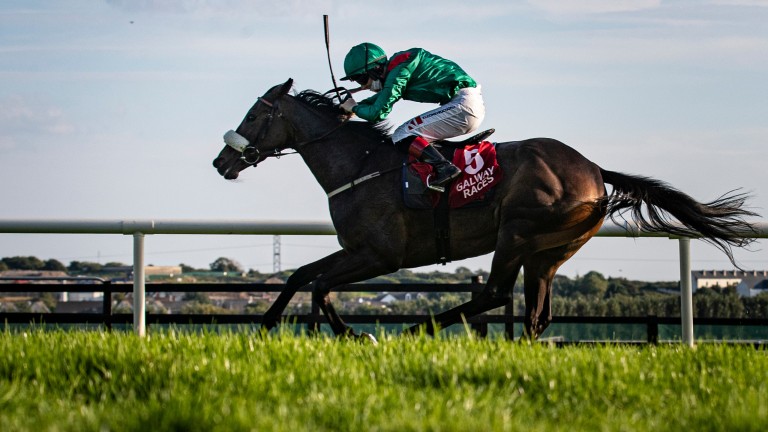 There was a sub-standard look to the 2021 running of the Ardilaun Hotel Oyster Stakes on the second day of the track's September meeting, and Dermot Weld took advantage of the opportunity as the Aga Khan-owned filly Haparanda scored for the first time at this level.

Colin Keane gave her a pro-active ride, sending her past the front-running Woodland Garden turning in and then holding off that filly by a comfortable two and a quarter lengths.

"She did it nicely," said Weld. "She was a consistent filly and I wanted to win a black type race with her. She is just reaching her peak now."

Most of the remainder of the evening belonged to Joseph O'Brien and Shane Crosse as they combined to land both juvenile maidens on the card.

The opening contest was won impressively by the Lloyd Williams-owned Swan Bay. The son of Australia looked a horse of some potential as he sustained an end-to-end gallop in readily accounting for the more experienced Anchorage by five lengths.

Assistant trainer Brendan Powell said: "He carried his head a bit high, but he is still green and is still a big baby. He is going to be a much better three-year-old. I loved the way he pulled away in the end."

Completing the double in the fillies' maiden was Tranquil Lady, also by Australia, who quickened up smartly to beat market rival Past Time comfortably.

Powell added: "She is still very green but picked up once she got to the other filly. All she can do is improve. She gave weight away, quickened up well and won with her ears pricked – you can't ask for more than that."

The stable recorded a treble when Dylan Browne McMonagle landed the apprentice handicap on Celestial Horizon.

FIRST PUBLISHED 7:40PM, SEP 7 2021
The way she won, I would be confident of winning more black type races with her. She is just reaching her peak now

Joseph O'Brien: the sheer scale and versatility of his operation is staggering 'It was an anxious wait' - State Of Rest survives inquiry drama to win Cox Plate Joseph O'Brien's flying start to jumps season continues with quality double Progressive Masen a 'proper horse in the making' after Knockaire success 'The dream is to go back to Cheltenham in March with an each-way chance' Harrington, Mullins and O'Brien fire quality bullets at Amateur Riders Derby