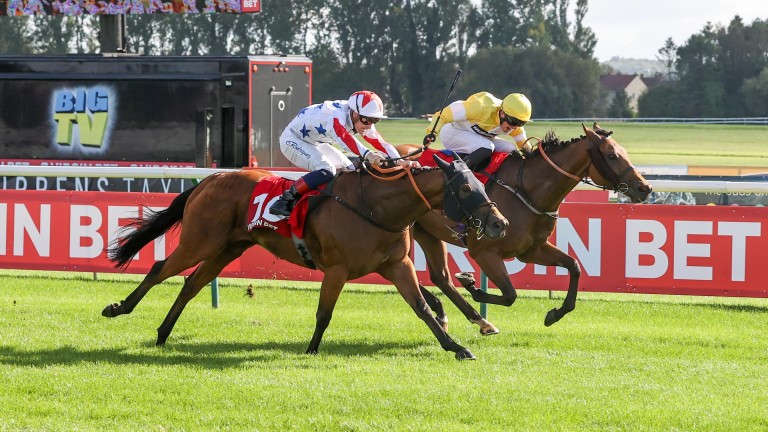 Staxton (far side) gets the better of Soldier's Minute in the Virgin Bet Ayr Silver Cup
John Grossick (racingpost.com/photos)
1 of 1
By David Carr, Racing writer of the year UPDATED 7:25PM, SEP 18 2021

It was Silver Cup rather than Gold for Staxton but his excited owners celebrated as though he had won the Derby.

The Ontoawinner syndicate adore this meeting and 150-odd members travelled up to cheer on their 15 runners over the three days.

And most of them seemed to be whooping and cheering as the result of the photo-finish to the Virgin Bet consolation race was announced.

Staxton, who has run numerous good races in the yellow and white quarters since his winning debut at 50-1 at Haydock in 2017, had been beaten in three Gold Cups but got the better of Soldier's Minute by a head this time after an attacking ride by Duran Fentiman down the far rail.

"Duran said before the race he'd walked the track and wanted to be on that far rail, and he was going to stick on it," said Ontoawinner director Simon Bridge. "The man's a genius!

"I've just about lost my voice, that was fantastic. We love Ayr; it's a great course and we get loads of owners up every year. Today is like a dream come true.

"Tim Easterby plots this Ayr meeting for us; he knows the lads like coming up."

Archie Watson's bold campaigning paid off as Nazanin got up close home in the Virgin Bet Firth of Clyde Fillies' Stakes.

"In the Lowther last time the ground was very quick and I felt as though she didn't let herself down. Today I let her use herself and she's got through that ground lovely.

"She's been highly tried on her last two runs, so it's always a bit worrying. You don't know whether you're over-facing them, but we've always known she's got the ability." 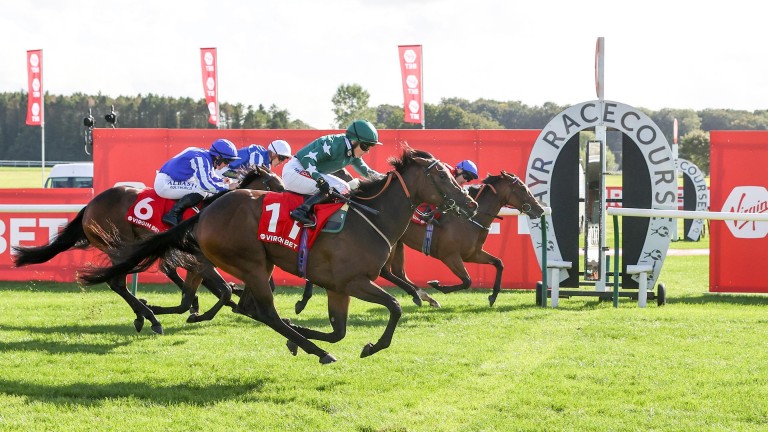 Scotland's most successful trainer was quickly off the mark with a double on the biggest day of the country's Flat season.

Mark Johnston has sent out more winners than anyone else in the whole of Britain, but he was delighted to add two more to his tally back in his home nation with Maydanny and Highland Premiere, both ridden by Joe Fanning.

And the trainer was thrilled to see the return of a proper crowd, as an ease in pandemic restrictions meant Ayr hosted its biggest turnout since this day in 2019.

Maydanny, who won the Golden Mile at Goodwood, gave Johnston his first victory in the Listed Virgin Bet Doonside Cup since Sennockian Star, who was awarded the 2014 running when Sky Hunter tested positive for a prohibited substance.

He had never got involved when last of five on a firm surface at Haydock a fortnight previously, but Johnston said: "Joe rode him for the first time then and he says he gave him a bad ride. 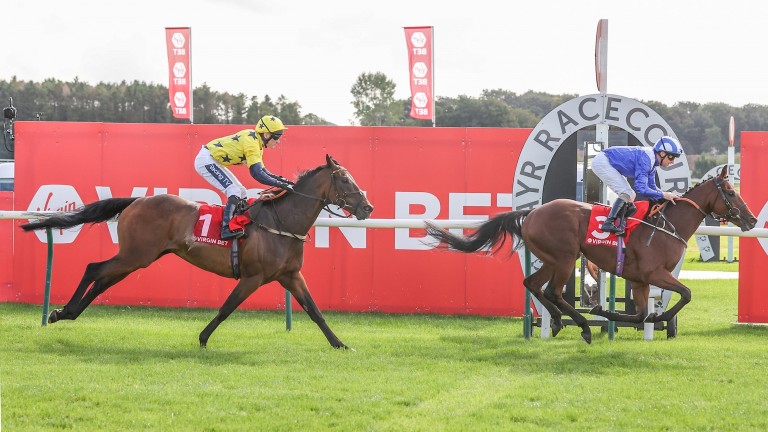 Joe Fanning is in command on Maydanny
John Grossick (racingpost.com/photos)

"He feels that the horse is probably better on this ground and he was at his best today, but at the same time he now feels that last time was more his fault than the horse's."

The winner earned a quote of 16-1 (from 20-1) for next Saturday's bet365 Cambridgeshire from Betfair.

Highland Premiere scored the third win of his juvenile season when making all in the mile nursery.

Johnston said: "He's by Highland Reel, so he's bred to get a trip and get better with time. He's been crying out for this trip and he stayed it well.

"He should be better next year. He sweats a lot – his sire was renowned for sweating a lot – but apart from that he's perfectly straightforward."

Annandale made it a treble for Johnston by landing the closing 1m5f handicap. 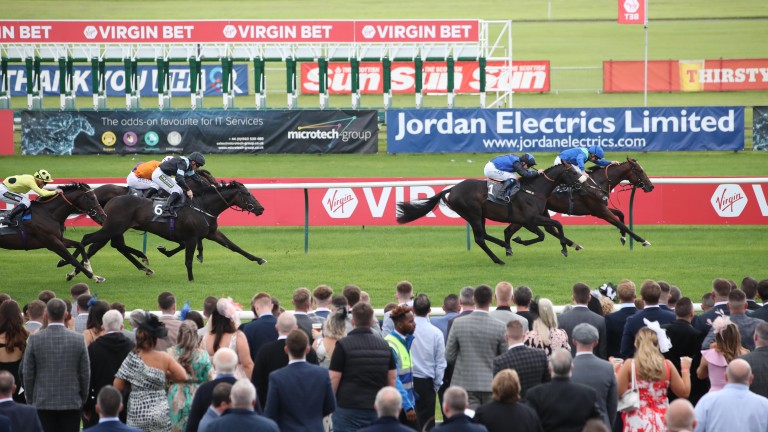 Highland Premiere holds on by a neck at the line
John Grossick (racingpost.com/photos)

FIRST PUBLISHED 5:19PM, SEP 18 2021
Duran said before the race he'd walked the track and he wanted to be on that far rail and he was going to stick on it. The man's a genius!

Hollie Doyle's amazing season continues as she rides 150th winner 'It'll be hard to top that' - Haynes on a high after Mr Professor strikes 'The dam had ten winners from ten foals - we got number 11 and it was useless!' Aldaary strikes at Ascot again as Jim Crowley completes 229-1 treble 'He's by far the best I've ridden' - Royal Patronage primed for Vertem Futurity Hollie Doyle and Johnny Murtagh feature in new ITV4 sporting documentary series