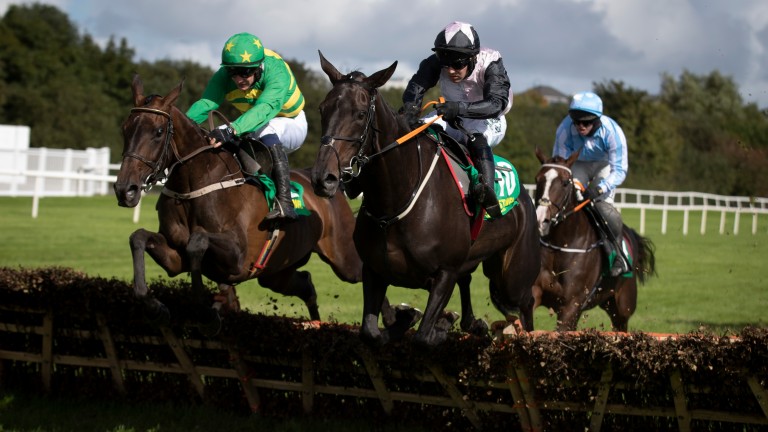 French Made (left) wins the mares' hurdle at Listowel, after which third-placed No Memory was suspended
Patrick McCann
1 of 1
By Justin O'Hanlon UPDATED 8:58AM, SEP 20 2021

Cork trainer Liam O'Brien was left fuming by the Listowel stewards' decision to fine him €2,000 and ban rider Ambrose McCurtin for 14 days under rule 212 after his mare No Memory finished a staying-on third in the 2m4f EBF Mares Hurdle.

No Memory, a 100-1 shot, stayed on from the second-last at the end of a truly run contest to finish third, beaten less than six lengths, behind the favourite French Made, whom she was meeting at level weights, some 19lb worse than she would have done in a handicap.

The stewards found O'Brien and McCurtin to be in breach of rule 212 and imposed the penalties accordingly. No Memory was also banned for 42 days.

An angry O'Brien, who informed the stewards he had been satisfied with McCurtin's ride, said: "The mare was out the back, with the winner. She was a stone and a half wrong with a Grade 2 winner, and we stayed on after the pace collapsed.

"That's the only reason we got so close, we just didn't have the pace to go with the winner. I don't know what they expect, and the chairman of the stewards said he didn't have to explain himself to me."

Asked if he would appeal against the stewards' decision, O'Brien replied: "Sure, I'll have to. Why were we punished? It's absolutely scandalous."

Following the victory of French Made, the afternoon belonged to Willie Mullins and Paul Townend as they went on to complete a treble.

The feature three-runner chase was most unusual in that the three runners were rated 163, 162 and 161, and it was the 161-rated Easy Game who prevailed. His jumping was of a high order, especially late in the day as he accounted for that most proficient of jumpers Ballyoisin by three and a half lengths.

Mullins, accompanied by owner Nicholas Peacock, who was racing for the first time since the 2020 Cheltenham Festival, said: "We'll look at the Grade 2 at Gowran in two weeks' time if he comes out of the race well, although we have Royal Rendezvous for that and it comes a bit quick. He might deserve an entry in the Grade 1 Champion Chase at Down Royal."

The third leg of the treble came when the ultra-frustrating Captain Kangaroo scored at the ninth time of asking over hurdles in the 3m maiden.

John Ryan, who has been breaking personal bests for fun recently, went to the 30-winner mark for the first time when Kilashee made all under Shane Fitzgerald to win the first division of the 2m4f mares' handicap hurdle.

Ryan said: "The credit for this goes to the vet Tom O'Brien, who saved her twice and did a brilliant job on her wind. Without him we wouldn't have her and I think people like him don't get enough credit. She's a proper mare."

FIRST PUBLISHED 5:06PM, SEP 19 2021
I don't know what they expect, and the chairman of the stewards said he didn't have to explain himself to me

Cheveley Park stars Envoi Allen and Allaho set for heavyweight John Durkan clash Patrick Mullins: 'Riding Chacun in the Tingle Creek is what dreams are made of' 'Who knows how good she is' - Statuaire denies My Mate Mozzie in a thriller Resurgent Bryan Cooper in treble form as Dunvegan finally comes good Ladbrokes Trophy: trainers and jockeys on the big-race contenders at Newbury Long-absent Braganza proves surprise packet as Willie Mullins saddles a treble