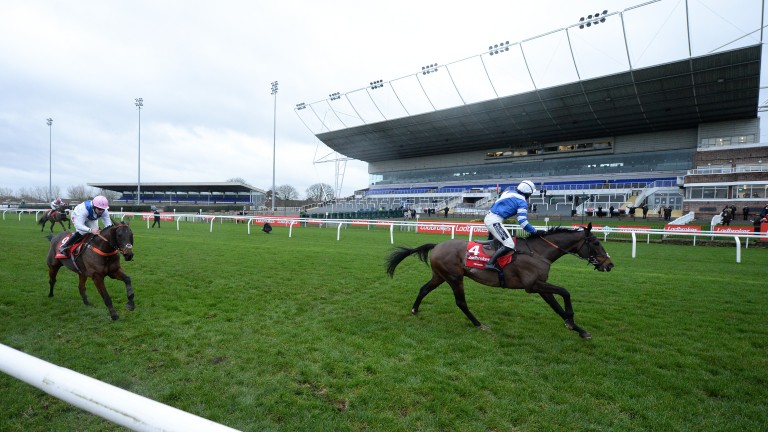 Bryony Frost does not do understated, and she chose the most prestigious jumps race outside of the Cheltenham Festival to become the winningmost female jump jockey in Britain under rules, landing the Ladbrokes-sponsored King George VI Chase by two-and-a-quarter lengths.

Trainer Paul Nicholls was always meant to win this year's King George – his 12th in total – at Kempton on Boxing Day. He saddled the two market leaders, two-time winner Clan Des Obeaux and Cyrname, the highest-rated chaser in training.

But Frost and Frodon go together like Christmas and presents. Both are good in their own right – standout in fact. But as a combination they are pure magic.

Frost was claiming 5lb the first time she won aboard the now eight-year-old. She is worth more than that on his back now with the two producing yet another spellbinding duet.

The start was Frost's only moment of worry. "He was getting bored and whipped around and I thought 'oh no, here we go'," she said. "But I got him back in and as soon as he crossed the sand and pricked his ears I knew his head was in the game and we found it quite easy to get to the front." 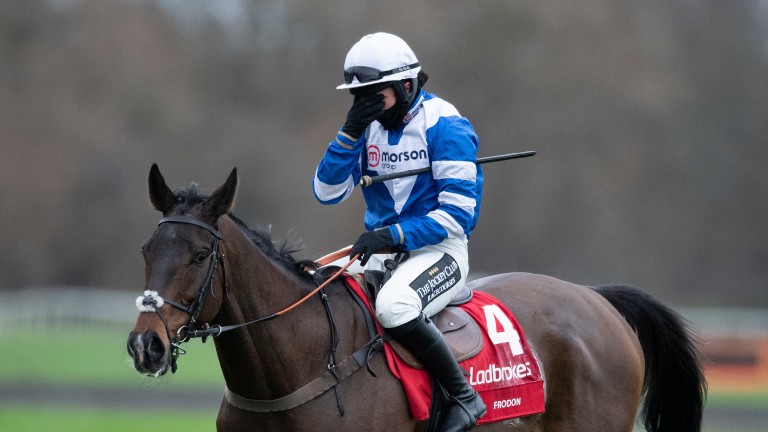 It would be unfair to the other jockeys to say that was the moment Frost and Frodon won it, but they took control of the race from the first fence and from there it was theirs to lose – if anyone else wanted it they would have to prise it from them.

The pair danced a rumba around Kempton with such fluidity the fact they were jumping slightly left did not matter. The fact even Nicholls expected two or three to come past them up the straight did not matter.

From the back of two out it was clear to all bar Frost and Frodon that the pair were going to win. They had put everyone else in the hurt locker, but were so swept up in the moment they just carried on dancing.

As Frost hurtled towards the 175th and biggest win of an already impressive career – one that includes three Grade 1s, two Cheltenham Festival winners but only one Frodon – Frost told her mount to concentrate one last time. And concentrate he did as he kept on well to withhold the late challenge of Waiting Patiently, with Clan Des Obeaux, the favourite, back in third. Cyrname folded tamely after four out and was pulled up. 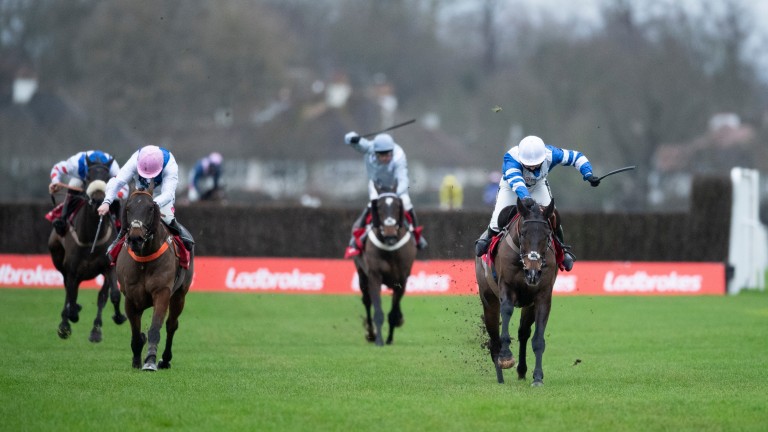 "I still can't believe me and 'Frode' are classed as a King George-winning pair!" she said. "When you have a horse that gains as many lengths as he does at his obstacles, who is as athletic and determined as he is, anything is possible.

"I basically pretended Aintree didn't happen [when Frodon could finish only fourth in the Many Clouds Chase this month] – I was coming straight on from Cheltenham in my own head and I just tried to set a gallop he'd enjoy."

One of the great joys of Frost is she can take you inside a race, make you feel how it felt. If the moment before the start could have cost them, in Frost's mind it was the home bend where the race was won.

"We got a very small breather on the bend, it was the first time in the whole race he actually listened, and then he's so balanced you can move him into top gear still on the bend," she said.

"It's all about the inches. We are trying to find the margins out there. You do not want to take away any of their oxygen by getting a fence wrong, putting them on the wrong leg or getting a bend wrong.

"He lent into the bit and started to elevate himself again, that was the moment I thought 'God, they're going to have to really be something special to come past us today. When we got to that line in front I couldn't believe it!"

However, the jockey's tactics weren't blemish-free, and Frost was given a two-day careless riding ban for interfering with the fourth-placed Saint Calvados on the home bend.

Nicholls' record in the King George is staggering. This was his 12th win in the last 23 runnings – with just five horses. The man Frost credits with making her the jockey she is today was able to joke "it's nice to do it with a different horse".

It was not the only thing that made his 12th win unique. The lack of the usual atmosphere was noticeable while the usual celebrations on returning to Ditcheat will not be possible. But Nicholls also noted another difference between Frodon and the likes of Clan Des Obeaux and Silviniaco Conti.

"He's beaten some very good horses there fair and square and that form puts him right in the Gold Cup picture. He loves Cheltenham, he is better there than anywhere and he keeps surprising everyone."

Frodon is now a best-priced 16-1 for the Gold Cup.

FIRST PUBLISHED 3:13PM, DEC 26 2020
When you have a horse that gains as many lengths as he does at his obstacles, who is as athletic and determined as he is, anything is possible