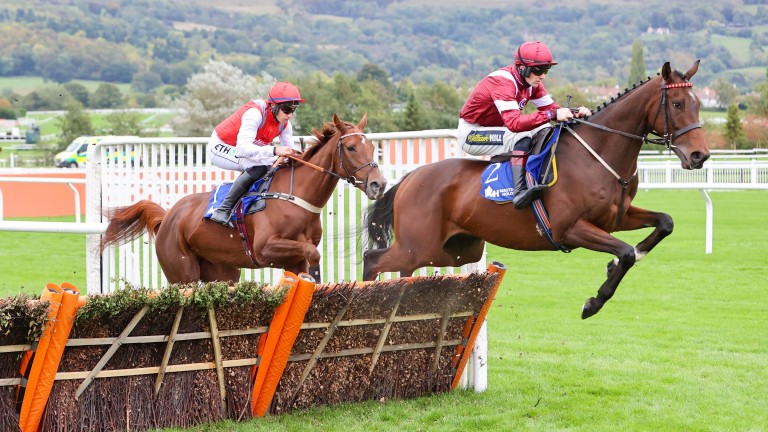 I Like To Move It: impressive winner of the Masterson Holdings Hurdle
John Grossick (racingpost.com/photos)
1 of 1
By James Stevens UPDATED 7:41PM, OCT 23 2021

Sam Twiston-Davies experienced a rollercoaster of emotions in the space of one afternoon when his two marvellous winners were blighted by one near miss and a dramatic mid-race incident.

The jockey said he could "only use swear words" to describe his agonising defeat with The Hollow Ginge in the 3m1f handicap chase, with Definite Plan the one delivering the killer blow by a head. It was later revealed the jockey felt he had made his move a little too soon.

But there was nothing Twiston-Davies could have done aboard Undersupervision, who crashed through the running rail when in contention in the 3m½f novice chase. He managed to hang on for second behind Does He Know, who scored by 12 lengths.

"****ing hell," he said. "I started the day swearing about horses and I'm going to finish it doing the same."

Frustration bookended the day for Twiston-Davies but there was a golden spell in the middle and I Like To Move It played a starring role. On only his second start over hurdles, the four-year-old displayed dazzling acceleration to defeat Tritonic in the Masterson Holdings Hurdle and set up a return to the track next month.

"He's scary good," said the jockey, who completed his double aboard Before Midnight in the 2m handicap chase. "It's not often you go out in a race when it's more about an experience. Today was about making sure it went smoothly and he jumped well.

"He's shown he's got an engine as he was taking on hardy horses. He jumped a few inadequately but still managed to win nicely."

Trainer Nigel Twiston-Davies, who compared I Like To Move It to stable legend The New One , said he would look to run him in the Grade 2 Supreme Trial Novices' Hurdle at the November meeting.

Reflecting on the victory, he said: "It's unbelievable. He cruises round and then as soon as you ask him to quicken he doesn't stop. His work at home was great right from the start. You never had to teach him to gallop – it was just whoosh. He's an absolute natural. This time last year he'd only just been broken and he's here now."

Victoria Malzard rode her first winner in Britain aboard 20-1 shot Kansas City Chief in the 3m handicap hurdle and inspired some emotional scenes in the winner's enclosure. 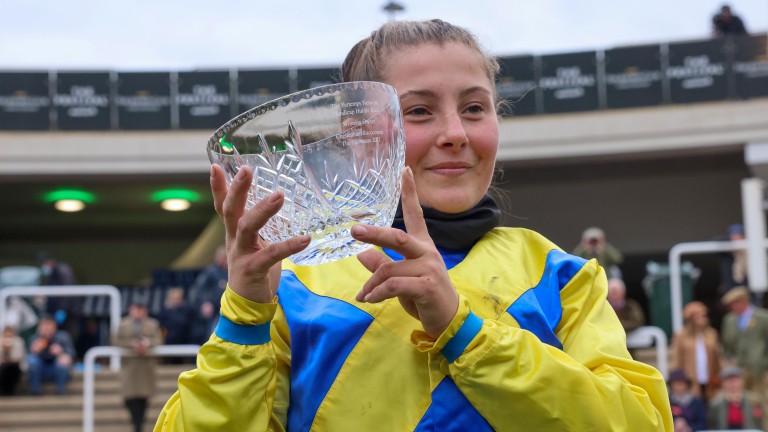 Her mother Alyson Malzard, a 15-time champion trainer in Jersey, said: "I'm speechless. That was amazing. It's Cheltenham for goodness sake and we're just a little family from Jersey.

"The horse is a family pet. We've had him at home all summer and that's my little girl that's just rode him. I'm being a mum now but it was just really brilliant."

Irish jockey Jordan Gainford sat next to Barry Geraghty on his flight on Saturday morning and the advice he received from the 43-time Cheltenham Festival winning rider worked a treat. He reeled in The Hollow Ginge on Definite Plan to record his second win at the track.

"I'm delighted," said Gainford. "To be at Cheltenham is one thing but having a winner is extra special. Barry Geraghty was on my flight so many thanks to him, he spoke to me the whole way over.

"He told me when I was coming down to leave a bit in hand and not to forget the winning post is a long way up that hill. In fairness to my lad, he did try when I asked him and that was very important."

O'Brien at the double

Fergal O'Brien celebrated a double on the card after 22-1 bumper winner Bonttay added to his success with Samba Dancer in the 2m½f handicap hurdle.

The trainer said: "It's been great and it's good seeing the crowds back – this is a brilliant place. We'll be having fish and chips on the way home to celebrate."

Missed The Big Jump Off? How to buy a copy and quick links to all of the content

FIRST PUBLISHED 7:13PM, OCT 23 2021
I started the day swearing about horses and I'm going to finish it doing the same

Twiston-Davies rides peaks and troughs as family friend brings up 60 for season 'I've been spoilt really' - Sam Twiston-Davies going great guns after double Imperial Commander: 'It was an intense time. Everything was pinned on him' 'He’s in serious order' - can challenger see off Elliott's seven in Troytown? The immovable object or the irresistible force? Haydock stalwart faces big test 'He's only nine' - Paul Nicholls plans spring comeback for Cyrname after wind op