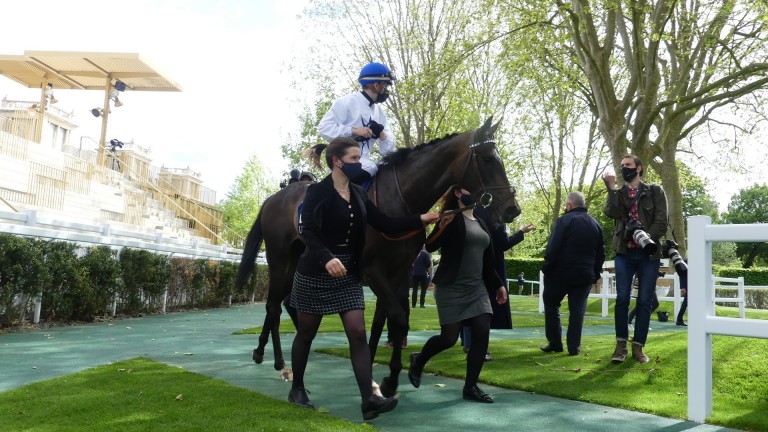 Barely half an hour after Aidan O'Brien notched a fifth win in the first colts' Classic of the French season, Jean-Claude Rouget reached the same landmark in the fillies' equivalent as Coeursamba sprang a major surprise to run down 1,000 Guineas winner Mother Earth.

It is likely that Rouget was thinking more of his maiden Arc success here seven months earlier than his four previous winners of the Poule d'Essai des Pouliches, as once again he and jockey Cristian Demuro had to survive 15 minutes or more of deliberation by the Longchamp stewards.

As had been the case in the Arc with Sottsass, the result once again came out in their favour as Coeursamba made a mockery of her 38-1 starting price locally, not to mention the 66-1 at which she was returned by British layers.

A daughter of the late Coventry Stakes and Prix Morny winner The Wow Signal, Coeursamba has always been well regarded by the Rouget team, though the trainer admitted to "pleasant surprise" after the filly left her comeback third in the dust with a decisive turn of foot.

Rouget said: "I suppose it was a step into the unknown because it looked an open race and I said to [racing manager] Paul Basquin beforehand, we could be first or second, or we might equally be seventh or eighth. It's a very pleasant surprise and what I loved was that she showed that double acceleration you associate with the good horses; that makes it very interesting for the rest of the season.

"She went back to her owners' farm over the winter and we were in no rush to have her out this spring as she had plenty of experience at two. I decided to give her a quiet comeback and make sure she didn’t have a hard race. After that, everything worked out because she had a good draw and she is streetwise."

Among his previous Pouliches winners, Rouget went on to win the Prix de Diane Longines with Avenir Certain and La Cressonniere, while Ervedya was kept to a mile and landed the Coronation Stakes.

Paddy Power went 10-1 about Coeursamba for the Diane but Rouget believes a mile is her optimum trip, though a visit to Royal Ascot will be on hold while the trainer and owner Abdullah Al Attiyah mull their options.

"She's not entered in the Coronation because there are so many issues with Brexit and Covid, so we'll see what we do with the entourage," said Rouget. "But I don’t think she’ll go to the Diane, I think she'll stay at this trip."

Demuro has blossomed as stable number one for Rouget and was full of praise for the way Coeursamba picked up Mother Earth.

"At the top of the open stretch [cutaway rail] I knew I had loads of horse under me and when I pushed the button, she took off instantly," said Demuro. "We didn't have an obvious chance beforehand but I believed in her because she had come on well for her reappearance and she looked wonderful in the parade ring. Now we can certainly say she is a good horse!"

Mother Earth appeared to get a perfect trip under Christophe Soumillon and looked set to record a historic double but had no answer to the winner’s late surge.

Nicolas Caullery was delighted with the third-place finish of another outsider in Kennella, who was only fifth in the Prix Imprudence.

"If you had offered me third ahead of time I’d have taken it on the spot," said Caullery. "It was her first try at a mile and she was so brave. Sebastien Maillot rode a very cool race and we've had this race in mind ever since she was placed in the Prix Miesque last autumn."

The winner of the Miesque was Amo Racing's Lullaby Moon, who was still in there pitching when caught in a sandwich between the first and second, scrimmaging which knocked her out of contention and also cost the Imprudence winner Reina Madre.

The Anglo-Irish challenge had already been weakened earlier in the day when Ken Condon withdrew Miss Amulet on account of the very soft ground.

Lee Mottershead: one beast and one monster – superstar performances as the Flat finally takes off (Members' Club)

FIRST PUBLISHED 3:48PM, MAY 16 2021
What I loved was that she showed that double acceleration you associate with the good horses