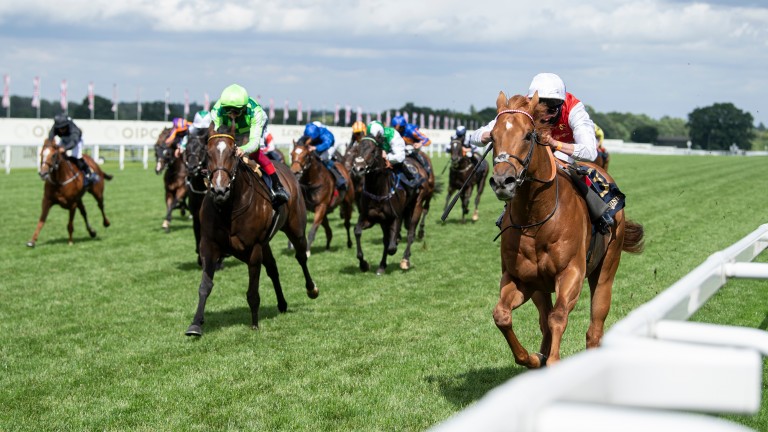 When it comes to Group 1 sprints at Royal Ascot, Clive Cox is a trainer to have in your corner.

Cox added to his past successes in the Diamond Jubilee and King's Stand to register a clean sweep in the royal meeting's top-flight sprint contests after unearthing his next star in Golden Horde.

He is in good company too as Sir Michael Stoute is the only other trainer to record the same treble.

The big sprints are usually races where everything can change in the blink of an eye, but Golden Horde could be called the winner a long way from home.

This was simplicity at its best. As the field split in two from an early stage, Golden Horde led the stands' side group and after travelling powerfully, he stretched clear for a totally dominant success under Adam Kirby.

"I was very proud of him, he’s a lovely, big strong horse," said Cox. "He was a wonderful two-year-old, but with the size and scope he’s really strengthened into that frame as a three-year-old.

"He's uncomplicated and has a great cruising speed. It’s great from a mental perspective to get these sprinters in a race, you can do all the training at home but there’s nothing quite like a race. He couldn’t have pleased me more."

The trainer revealed Golden Horde, winner of the Group 2 Richmond Stakes last year and making his first start of the season, resides in the same Beechdown Farm box which formerly housed Harry Angel and his sire Lethal Force, the 2013 Diamond Jubilee hero.

On comparisons with his father, Cox said: "I think he’s ahead of where Lethal Force was at this stage, I don’t think there’s any doubt. Lethal Force was a horse that matured and improved as a four-year-old. He was a special horse, but I’d like to think this fella is as good and at this stage he’d be in front of him." 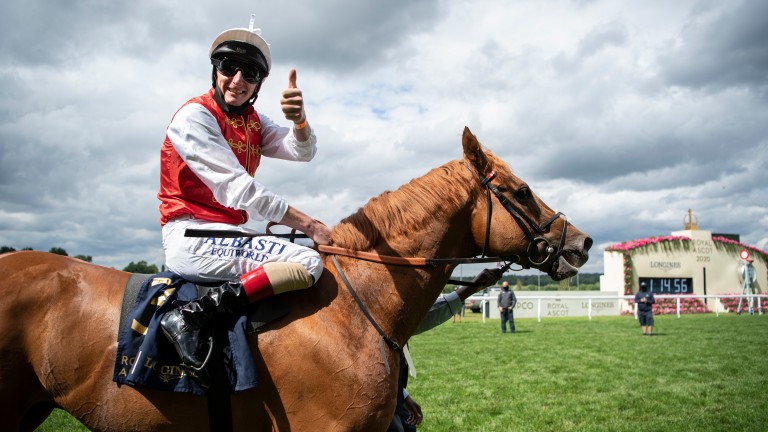 Kirby's uncomplicated style of riding suits Cox's horses down to the ground, particularly the sprinters, and the trainer reserved praise for the jockey after they combined for a sixth Royal Ascot win together.

"We trust one another and have a very close working relationship and I couldn’t wish to work with someone more reliable and honest," said Cox.

"When you leg him up, you have a lot of faith and confidence. You know he’s going to sit back and do the right thing and if anything goes wrong he takes care of the horse."

Golden Horde is set to attempt to follow Lethal Force and Harry Angel on to the Darley July Cup roll of honour, a race for which was cut to 4-1 joint-favourite (from 8) with Coral.

Runner-up Kimari might never have looked like catching the winner, but she travelled well in pursuit under Frankie Dettori.

"She ran super but the ground was too sticky," said the jockey. "She went through the race well but couldn't pick up in the ground."

Ventura Rebel ran into third at a big price for Richard Fahey and deserves his share of credit after coming down the centre of the track.

"He's a grand horse who goes on any ground and he's going to progress from that," said Fahey. "He's had a few niggly problems, so he should come on again for the run today. We could go 7f with him at some stage this season."

Adam Kirby: I’m not changing anything as it’s all working perfect (members)

FIRST PUBLISHED 3:45PM, JUN 19 2020
When he had this first run at Newbury we knew he was pretty decent but he’s done nothing but improve

'We have another superstar - he's bang up there with the best we've had' 'That was just fantastic' - Harry Eustace enjoys his first winner as a trainer 'She's on the up' - Oaks could be on the agenda for Save A Forest says Shepherd Can Craven winner Master Of The Seas follow up in the 2,000 Guineas? 'I think he's a Guineas horse' - Buick impressed as Master Of The Seas strikes 'I certainly hope he's a Guineas horse' - Cox to run Classic hopefuls at Newbury