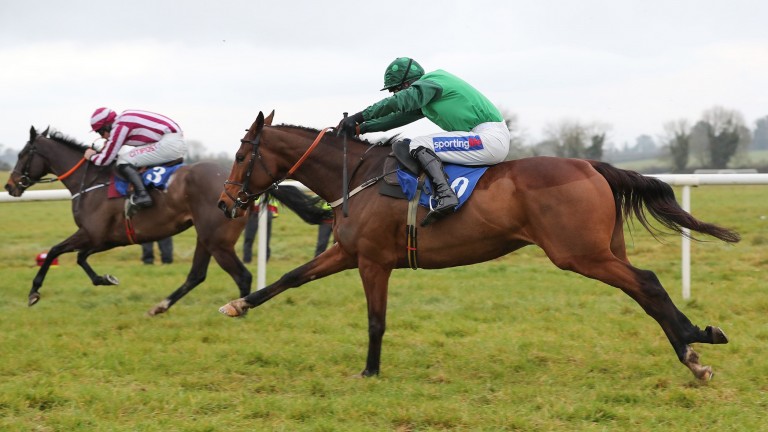 Willie Mullins' last two winners of the Rockshore Novice Chase were Rathvinden and the wonderful Wicklow Brave so Fan De Blues has big shoes to fill after making it three wins in five years for the champion trainer.

Such an outcome didn't look likely as the Henry de Bromhead-trained pair, Gin On Lime and Bold Enough, traded punches on the turn into the home straight but Paul Townend timed his challenge to perfection and gunned them both down.

The winning jockey said: "It's great when it works out. He has loads of experience and it was his jumping that put me into it. I thought I had a live chance turning in because I thought the two boys in front of me were flat out and I hadn't fully committed yet."

Mullins began ladies' day at Galway with a winner too but, rather unusually, Townend wasn't on it.

The champion jockey opted to ride Tax For Max but got it wrong as Brian Hayes cashed in to score on Farout, who confirmed the promise of his wide-margin Cork maiden hurdle win back in May.

Mullins said: "It was a very brave performance by the winner. He did it the hard way and took the race by the scruff of the neck. Brian just gave him a breather about halfway and it's a big improvement from him. He's going to go up to graded company now."

Simon Torrens once again showed why everyone is saying nice things about him as the 3lb claimer won the beginners' chase on 7-2 shot Streets Of Doyen for John McConnell.

Torrens said: "I came across to the stands’ side for a bit of a running rail, but halfway up the hill he spotted the crowd and idled plenty. He's a classy horse, he went to Cheltenham and was third in the Albert Bartlett. He's been consistent all year and deserved to get his head in front.”

Popular jockey Ian McCarthy, best known for his partnership with the star mare Jennies Jewel, announced his retirement after finishing tenth in the opening maiden hurdle on Hanoi Jane.

"I've ridden about 90-odd winners and there was a story behind every single one. I wouldn't have swapped it for the world," said a smiling McCarthy afterwards.

FIRST PUBLISHED 7:45PM, JUL 29 2021
It's great when it works out. He has loads of experience and it was his jumping that put me into it