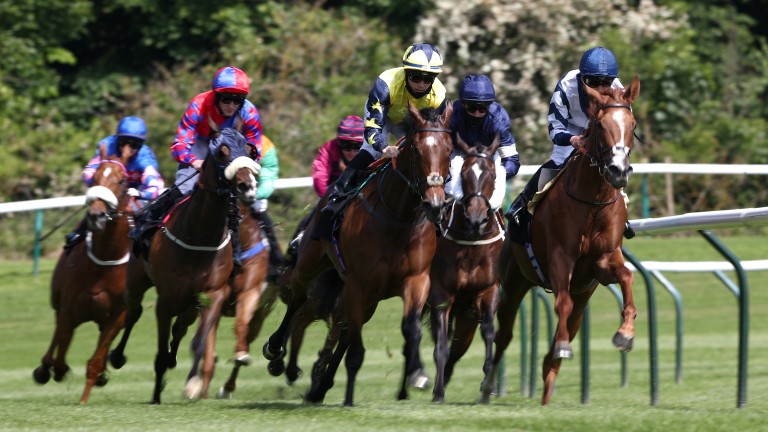 Puckle proved the old adage that if at first you don’t succeed, try try again when finally ending a frustrating run of placed efforts with victory in the 1m2f handicap.

Trained by Mark Johnston for the Pucka Partnership, Puckle has had the misfortune of giving her all and bumping into one just a little better handicapped than her on five of her last six outings, with a third-placed effort on the only occasion she has not been second.

However, equipped with first-time cheekpieces, the four-year-old skipped clear of the field in the final stages and had enough up her sleeve and sufficient focus, despite her ears flicking forward as she ran through the final furlong, to claim the contest under jockey Joe Fanning.

Fanning said: “Every time she’s bumped into one that’s gone and won. She’s genuine enough but the cheekpieces have helped a little to be fair. When she goes she does just pull up once she gets there.

"She's a better filly this year and I think she’s stepped up a bit. I think she’s well entered up, so I’m sure she’ll be out again soon enough."

Siam Fox put his name forward for a return to a more conventional track on his next start after finding the undulations at Nottingham somewhat perplexing despite his success in the 1m½f  handicap.

Having found Epsom far too complicated on his previous start, the switch to a flatter course looked in the favour of the King Power-owned three-year-old yet the small ups and downs of the Nottingham straight still left him looking, and feeling, all at sea.

Silvestre de Sousa, who rode the winner for Richard Hannon, said: “I wouldn’t say he liked the track on this ground as he hit every undulation, but he got away with it.

"I didn't want to take any chances as I think a mile is as short as he wants to go, but I think a different track and further will bring out more improvement."

FIRST PUBLISHED 6:35PM, JUN 2 2021
I wouldn’t say he liked the track on this ground as he hit every undulation, but he got away with it