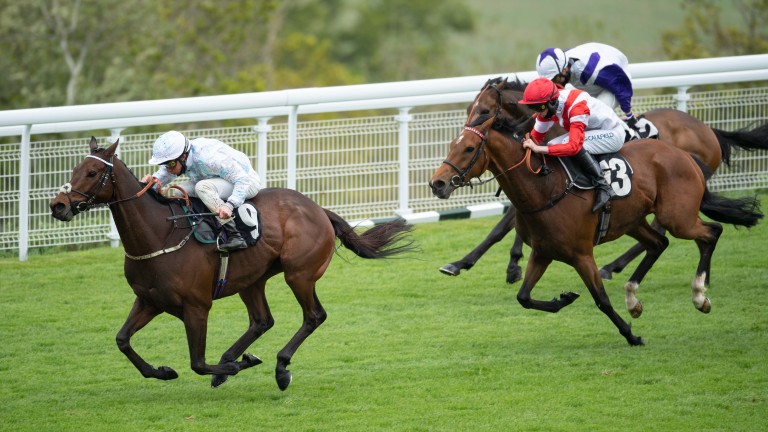 East Asia wins his third race in a row to give William Buick a treble on the card
Edward Whitaker (racingpost.com/photos)
1 of 1
By Catherine Macrae 6:35PM, JUN 6 2021

East Asia looks like he will take plenty of stopping after continuing his winning ways since joining Ian Williams’ yard.

The six-year-old landed his third win from three starts for his new trainre when running out a comfortable winner of the 2m handicap to give William Buick a treble on the day.

Williams said: "We’ve been really happy with him. We didn’t expect him to be as good as he was, and it was only after his first run that we realised.

"I got upset with the handicapper after his first start for us because I thought he was very harsh, but evidently he saw something I was not expecting!

"Winning on better ground here opens up a lot more opportunities, and he looks like a smart stayer going forward."

Williams paid tribute to the winning jockey, adding: "It’s always nice to build up an association with a jockey such as him, and hopefully we will be there to ride East Asia wherever he goes next."

Buick also took the 7f handicap on Perotto and the seller on Rosa Mystica.

Free Wind was in a class of her own in the 1m2f maiden, sweeping to a nine-length win for John and Thady Gosden.

The daughter of Galileo looks promising as she attempts to justify her 325,000gns price tag for owner George Strawbridge.

FIRST PUBLISHED 6:35PM, JUN 6 2021
I got upset with the handicapper on his first start because I thought he was harsh with him, but evidently he saw something I was not expecting!

St Leger next stop for rapidly progressive Gordon winner Ottoman Emperor 'Special' Lady Bowthorpe set Deauville aim as Jarvis eyes big autumn prizes 'There has been a mix-up' - Wonderful Tonight's trophy goes missing at Goodwood Wonderful Tonight sails on but which French jockey will get the Arc call-up? Up 23lb and he bolts in - Mr Wagyu defies the handicapper once again Buick and Balding earn leading jockey and trainer titles after glorious week