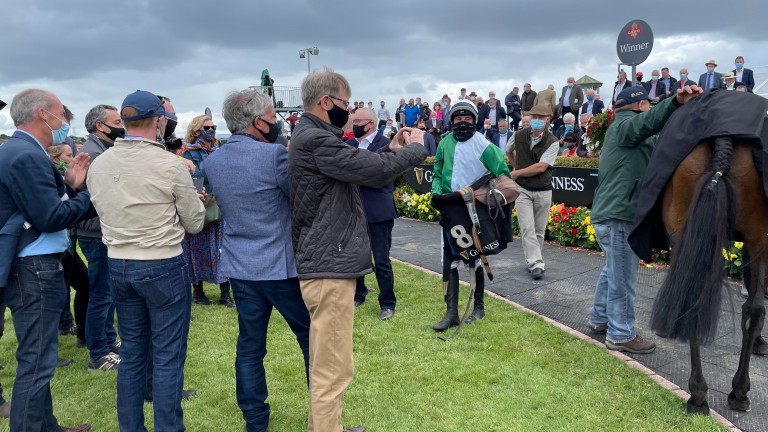 Conor McNamara got up late to land the feature Guinness Handicap Hurdle on the mare Jazzaway for Willie Mullins, providing the champion trainer with his eighth winner of the meeting in less than three days.

McNamara had been seen to good effect previously on this mare after she gamely landed a competitive handicap hurdle over 2m at the Punchestown festival, and not only did she stay the 2m7f of this contest, she appeared to relish it.

She was off the bridle some way out, but McNamara was able to keep stoking her up and he was rewarded as she put her head down and battled from the final flight to just touch off the front-running Western Victory by a head.

The rider said: "It's dynamite to ride a double on the Friday night at Galway. This mare was very tough and genuine, she travelled and jumped everywhere and really laid her heart on the line for me. She did need a fair bit of stoking up but she really flew up the hill."

McNamara initiated his double by coming with a similar wet sail from the final flight to land the Opportunity Handicap Hurdle on a spare ride on Hallowed Star for Shark Hanlon and owners Annette and Michael Mee.

For Mullins, eight winners became nine when Grand Bornand took advantage of the final-fence fall of favourite Russian Diamond in the beginners' chase.

It was some justice for his rider Paul Townend as he looked set for victory in the opening maiden hurdle but for being unseated at the final flight from Gamin Original.

It was no real loss for that one's trainer Willie Mullins, as the Patrick Mullins-ridden stablemate Purple Mountain was the one to take advantage.

Having failed narrowly to get into Thursday's Galway Hurdle, there was handsome recompense for the John Queally-trained Arcadian Sunrise as he took the €75,000 handicap hurdle under a superb Denis O'Regan ride.

The trainer was non-committal about coming back for a crack at next year's Galway Hurdle. "He will probably go for a good staying handicap on the Flat next. I had the Sky Bet Handicap at York in mind but it might come a bit soon, but we have plenty of options for him," he said.

FIRST PUBLISHED 7:00PM, JUL 30 2021
She travelled and jumped everywhere and she really laid her heart on the line for me