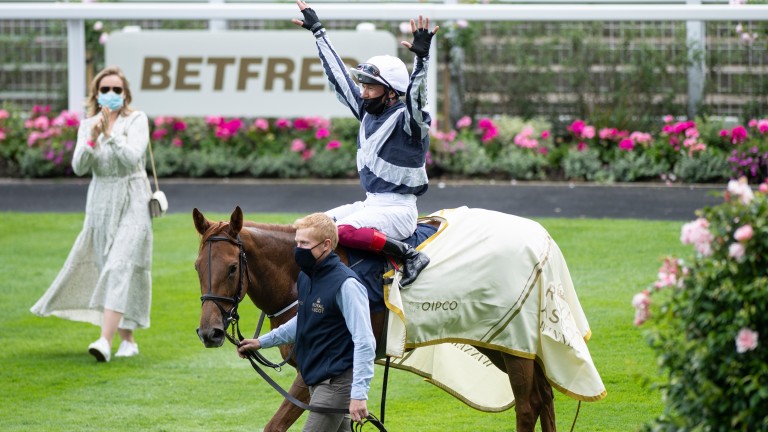 Frankie Dettori declared that he had conquered Royal Ascot after Alpine Star followed in the footprints of her exceptional half-sister Alpha Centauri by winning the Coronation Stakes emphatically.

The victory means Dettori has now won the current full set of Group 1 races at Royal Ascot, although his only victory in the King's Stand Stakes came on Lochsong in 1994 when the race was a Group 2.

A Group 2-winning juvenile last season, the Jessica Harrington-trained Alpine Star had not run since landing the Debutante Stakes at the Curragh almost ten months ago, but she proved too strong for her rivals to score at 9-2.

After stretching clear of admirable US raider Sharing by four and a quarter lengths, Dettori said the exciting three-year-old is up there with the best fillies around and Paddy Power responded by cutting her to 10-1 for the Investec Oaks (from 33).

SkyBet and BetVictor were more impressed, making her a 6-1 chance for Epsom glory.

"Royal Ascot means a lot to me and for one reason or another I've never been able to be on the right horse in this race," said the ecstatic Italian. 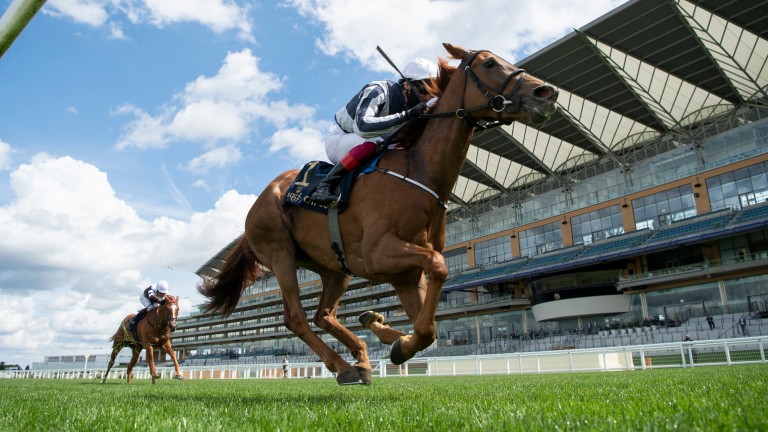 Alpine Star: as short as 6-1 for the Investec Oaks after her impressive Ascot success
Edward Whitaker

"Alpine Star was beautifully prepared by Jessica and I'm thrilled to win every Group 1 at Ascot."

Harrington was not on hand to witness her sensational scorer but relished the success in the company of her friends in County Kilkenny.

"I'm very lucky to have fillies like that," she reflected. "I couldn't believe how good she was."

She added of where the runaway winner could line up next: "I actually have no idea what the plan will be. I need to talk to the owners and Frankie, and then we'll make the decision. She likes ease in the ground so I'd never run her on good to firm."

Dettori already has an idea of how the Investec Oaks picture looks, having guided leading contenders Frankly Darling and Franconia to victory over the past week, and feels Alpine Star could be at her best over 1m2f. 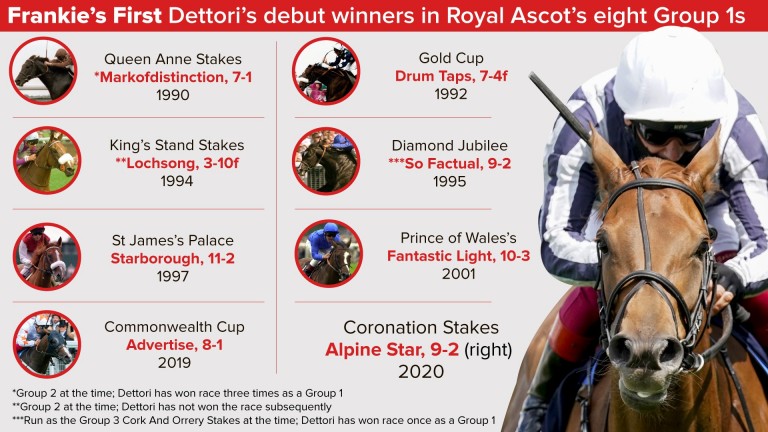 "She'd definitely get a mile and a quarter, she did her best work at the end but I don't know about a mile and a half," he said of the Niarchos Family-owned performer.

"I would say right now ten furlongs would be the best distance, but she's a good filly and won in good style."

He added: "As the week's gone on things have got better, and today was a big tick off the boxes of my career. The racing has been second to none and it's been tremendous."

Fillies' Mile heroine Quadrilateral was sent off the 2-1 favourite and ran creditably for third despite being unable to land a telling blow at the death.

Harry Charlton, son of trainer Roger, said: "She travelled best and got to the front but then rolled about a bit. Who knows why? She looked like she was going to win nicely but, for whatever reason, she didn't go through with it."

Irish 1,000 Guineas third So Wonderful could only keep on at the one pace for fourth, while runner-up in the Newmarket equivalent Cloak Of Spirits ran better than her finishing position in fifth suggested, just fading out of the frame inside the final furlong.

FIRST PUBLISHED 2:36PM, JUN 20 2020
Alpine Star was beautifully prepared by Jessica and I'm thrilled to win every Group 1 at Ascot

'Another win looks imminent' - our experts nominate their horses to follow 'Worth an ante-post tickle' - our experts assess Lucky Vega's Classic claims Harrington ace Lucky Vega 16-1 for 2,000 Guineas after Phoenix Stakes demolition Pinatubo showdown could be next for Space Blues after Gheest glory Alpine Star and Circus Maximus could add extra spice to intriguing Marois clash 'The more I run her, the better she is': Millisle out to bag another Group 3