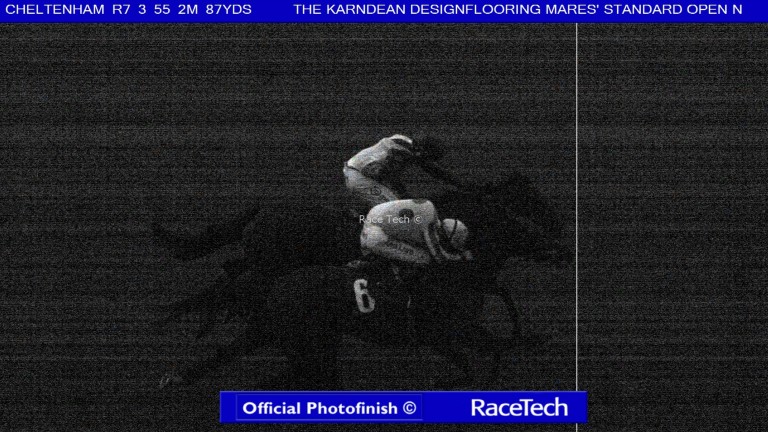 The official photo from the last race at Cheltenham on Saturday
1 of 1
By David Baxter UPDATED 7:51AM, NOV 15 2020

The final race of the afternoon at Cheltenham on Saturday may have provided a thrilling finish, but it was also an inconclusive one that prompted an outcry on social media with a dead-heat called between Elle Est Belle and Ishkara Lady.

With on-course judge Guy Lewis unable to be certain who had crossed the line first in the murky conditions, there was no option but to call the dead-heat, the BHA later asserted.

Staged in fading light with a scheduled off time of 3.55, visibility was not the best for the 2m½ Listed mares' bumper, and there was little to separate the first two home, Elle Est Belle and Ishkhara Lady, as they fought out a head-bobbing finish.

Exchange punters were on the side of Ishkhara Lady, as she traded at 1.01 in betting on the photo, while Elle Est Belle was matched at 90 in running.

However, after a wait of several minutes Lewis could not conclusively split the pair and so a dead-heat was called.

While the winning trainers were not complaining, not everyone was happy.

Geoff Hopcraft (@GeoffHopcraft) was another who thought there was a clear winner, and he tweeted: "Not sure we’ve heard the last of that one, can see Ishkhara Lady getting the race retrospectively. In this day and age, we need better technology than a gloomy mirror."

Neville Kent (@NevilleKent) was of a similar opinion, and tweeted: "Not had a bet, but you're seriously telling me that the horse's head on the far side [Elle Est Belle] is on the line? If I owned Ishkhara Lady I'd be appealing that."

It was difficult to take any concrete proof of a dead-heat from the official photo provided by RaceTech, which revealed a dark image of the two horses hitting the line together.

Harry Fry, trainer of Ishkhara Lady, had not seen the photo but said: "Conditions were very dark to say the least and it was not an easy call to make.

"I'm delighted with Ishkhara Lady, we were coming for this race a year ago but then she slipped a tendon off a hock. I'm delighted for her owners, it was fantastic to see her back on track and winning at Uttoxeter, and now she's followed up here so I'm over the moon."

A BHA spokesperson said: "In order to call a winner the judge has to be certain that one horse has crossed the line first.

"In this instance in the dark conditions it was not possible to say with certainty that either horse finished in front, even despite the fact that the judge has access to a higher definition image than is posted online.

"Therefore a dead-heat was correctly called and this decision was verified by the stewards, as is standard procedure."

FIRST PUBLISHED 4:58PM, NOV 14 2020
It was difficult to take concrete proof of a dead-heat from the official photo which revealed a dark image of the two horses hitting the line together

What they say on the Betfair Hurdle: 'My Tent Or Yours won it off that mark' Paul Kealy is taking on Al Boum Photo with a pair of Gold Cup each-way shots Graeme Rodway thinks Paul Nicholls has found a valuable edge for the Lanzarote 'It's going to hurt' - Cheltenham MP on £60m tourism hit with no festival crowd Find out how the Mares' Chase will impact the Cheltenham Festival running order Unbeaten Tolworth Hurdle winner Metier among 49 Betfair Hurdle entries