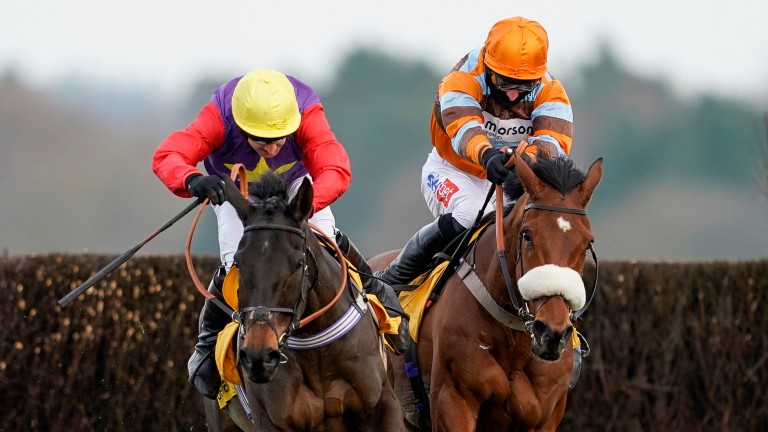 Jeremy Scott admitted he rarely gets emotional, but Dashel Drasher tested his composure to the full when bravely winning the Betfair Ascot Chase to make it a second Grade 1 for the trainer and a first for jockey Matt Griffiths.

The race was expected to be won by a trainer based in Somerset, with one of the two runners based down the road at Ditcheat – 5-4 favourite Cyrname or the well-fancied Master Tommytucker – scoring for Paul Nicholls.

Instead, eight years after his previous top-level win with Melodic Rendezvous, it was Scott who took the day following a gutsy performance and a slow-motion finish.

Dashel Drasher had proved his suitability for the challenge Ascot offers, winning his three races at the Berkshire course, including a handicap victory categorised by bold jumping last month.

Scott said: “It’s a great thrill and particularly nice we bred the horse as well. It’s not very often I get emotional about something but I definitely had a bit of a welling up there when he won.

“If Cyrname turned up on his A-game I didn’t think there was a cat in hell’s chance. Quite frankly if Cyrname had won and we had finished second or third we’d still have been delighted."

But Cyrname did not turn up on his A-game. He won the duel over the first fence, scuppering the eventual winner’s plan, but he was evidently not travelling with the zest he possesses at his best when passing the winning post with a circuit to go. 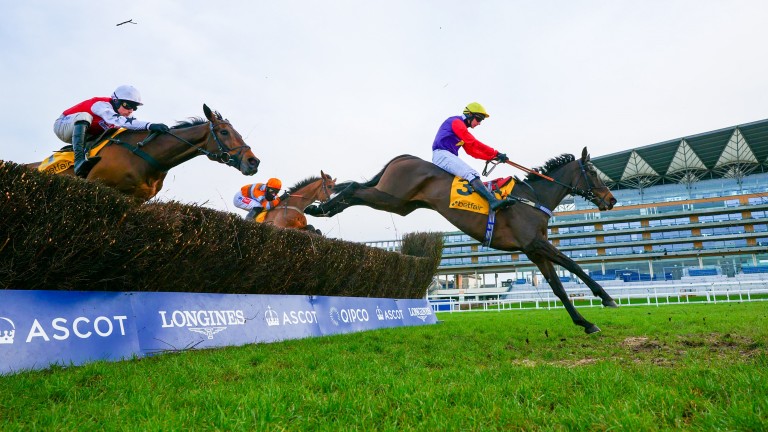 When the favourite was joined by Dashel Drasher and a bit of pressure was applied, he quickly wilted and Harry Cobden pulled him up before the 13th fence. Nicholls reported afterwards a breathing problem may be a possible issue.

That is to take nothing away from Dashel Drasher, Scott or Griffiths. The trainer said the plan was to unsettle Cyrname, taking him on when the opportunity presented itself. But the eight-year-old still had plenty to do once Britain’s joint highest-rated chaser departed the contest.

The closing stages were not easy for Scott to watch as Dashel Drasher appeared to paddle, and a poor jump at the last opened the door for Master Tommytucker before Dashel Drasher pulled out more to give Griffiths the biggest win of his career by some margin.

The jockey said: “He jumped well, he was efficient but I could never really chuck him at them like last time. I didn’t want to get to the front when I did.

“I had no momentum going into it [the last], he was pulling himself up, but he picked up after the last. It’s going to mean the world to Jeremy, Grade 1s are few and far between and Jeremy hasn’t won one for a long time.

“If Cyrname turned up, he was going to be hard to beat. Before we went past where we started Harry [Cobden] wasn’t really travelling and Harry [Skelton, on Bennys King] joined me and then it was Daryl [Jacob, on Master Tommytucker].

“I was conscious to keep the pressure on him [Cyrname] if he was trying to get a breather. My horse has done very well to win because I don’t think he was at his best jumping-wise today.”

Dashel Drasher has a Ryanair Chase entry, but connections are keen not to over race their new star.

Scott said of the 4-1 winner: “At home he doesn’t blow your socks off but on the racecourse he digs deep. In fairness to the horse, every time he’s run here he’s done exactly the same thing and Matt has always said he’s always got a little bit left up his sleeve, so that’s what you were hoping. I have to say watching I wasn’t quite sure, it didn’t look great [at the last].

“Always turning out of Swinley Bottom and coming up the home straight you suddenly look at him and think he’s absolutely cruising. And then it gets more and more desperate to the last fence, just so he can pull out a bit more.

“Why Ascot suits him I don’t know, but I’m very glad it does.”