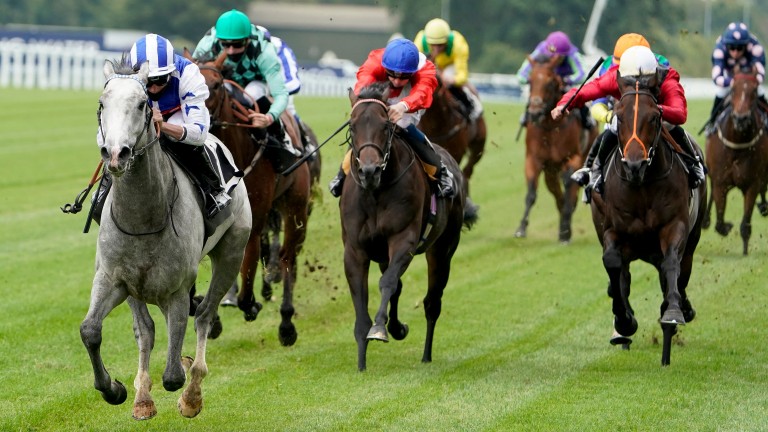 Dark Shift (grey) teed up a Royal Hunt Cup bid with an impressive win at Nottingham
Alan Crowhurst
1 of 1
By Maddy Playle UPDATED 7:27PM, MAY 22 2022

Dark Shift showed a sharp turn of foot to come from last to first and win the feature 1m½f handicap in dominant style, prompting bookmakers to cut him to as short as 10-1 (from 25) for the Royal Hunt Cup.

The colt swaggered three lengths clear of 11-8 favourite Dubai Mirage under William Buick, who was riding a double after partnering 1-3 favourite Secret State to win the novice stakes over the same distance.

Dark Shift's trainer Charlie Hills said: "I've been pleased with him all year. I was really annoyed with his run last time in the Victoria Cup as we had a terrible draw, so the race developed totally away from him and he was never in it."

The four-year-old is already a three-time winner at Ascot, and with Group 1 winners Ulysses and Shiva featuring in his pedigree, Hills is hopeful there is more to come.

"It's a slow-maturing family, so he's taken time to get to his best," he said. "Hopefully we can keep going up. He's a giver and it suits him to find some cover."

The Lambourn trainer could also be represented at Royal Ascot by sprinters Khaadem, Equilateral, Royal Commando and Garrus, who all hold Group 1 entries.

Hills added: "It's an important week and it's great to go there with chances."

Havana Grey is leading the race for first-season sire honours on both earnings and winners, and Maylandsea added to his tally with an impressive debut victory in the 5f fillies' maiden.

'We knew she was good' - Shandy Star denies Buick a four-timer in feature Delighted Doyle 'had to be brave' on Naval Crown in thrilling Platinum Jubilee Royal Ascot leading jockey 2022: can anyone stop Ryan Moore? Will Hurricane Lane be fully tuned up on his return in Hardwicke? 'I don't know where our ceiling is' - patience pays off for Secret State