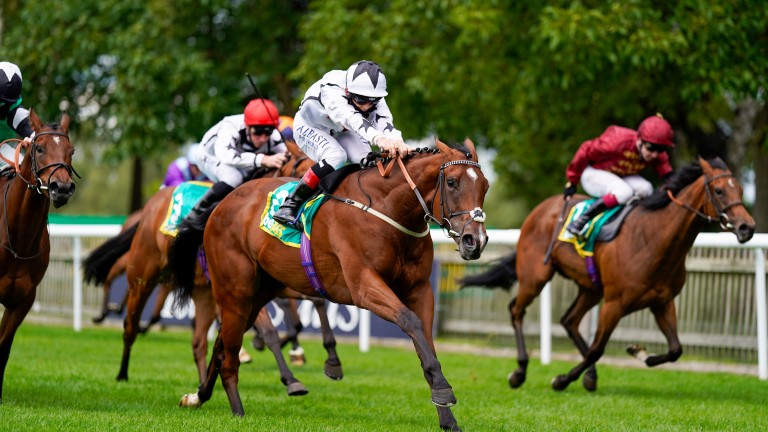 Royal Ascot winner Dandalla followed up her victory in the Albany Stakes with a hard-fought success in the Duchess of Cambridge Stakes under Ben Curtis.

The daughter of Dandy Man was made to work harder for this first Group 2 victory than at Ascot but was a clear winner at the line from 28-1 shot Fev Rover, giving owner Nick Bradley a one-two. Santosha, a 50-1 shot, was third.

The even-money favourite, trained by Karl Burke, was reluctant to enter the stalls in the preliminaries but proved too good for her six rivals with impressive Newmarket winner Time Scale only fourth.

Bradley said: "I dreamt of that. When I spoke to Richard Fahey [trainer, Fev Rover] this morning he had it the other way round! I thought we were doing the right thing putting both of them in.

"I was a bit worried when Dandalla wouldn't go in the stalls, she did it at Ascot but she was a bit smoother there so that got the heart racing. Karl has done a great job with her. He's good fun and is an excellent man to have a horse with, I can't say enough about them."

Curtis added: "She's had to have a lot of ability and a lot of guts to get home in front today. I was trying not to give her a hard race and ride her hands and heels but at the end I could hear them coming, luckily she held on.

"She has a great will to win and a good mental attitude to go along with her ability. She ticks a lot of boxes. She was a bit reluctant in the stalls as she does have her own way of doing things."

FIRST PUBLISHED 2:37PM, JUL 10 2020
I was a bit worried when Dandalla wouldn't go in the stalls, she did it at Ascot but she was a bit smoother there so that got the heart racing