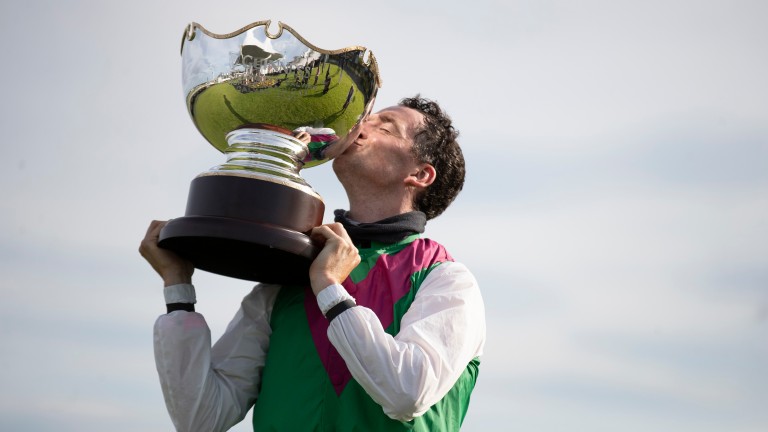 It looked a deeply competitive Guinness Galway Hurdle but quality came to the fore as Aramon produced the most impressive weight-carrying performance in the €200,000 handicap for over 20 years when stamping his authority all over an incident-packed race.

With 11st 10lb on his back, Patrick Mullins’s second winner of the illustrious summer highlight carried the biggest burden to victory since Quinze lumped two pounds more to victory in 1999. Even that, though, pales somewhat alongside the merits of this barnstorming display, for it was a very different race then.

When Quinze pulverised the field by 14 lengths under Richard Dunwoody, he did so off a modest rating of 123. Two years ago, when Mullins bagged his breakthrough win in the 2m contest, Sharjah ran off a mark of 146.

Aramon eclipsed that off a scarcely believable 155 to give Willie Mullins – absent this time – his fourth success in the race following the successes of Mystical City (1996), Clondaw Warrior (2016) and Sharjah.

Having led early on, champion amateur rider Patrick Mullins followed in the slipstream of Hunters Call, before joining him with his hands full as they took the final flight.

From there, Hunters Call wilted and Hearts Are Trumps momentarily challenged, with Petit Mouchoir also bang there. However, Aramon, who had finished second to Saint Roi under a big weight in the County Hurdle before readily beating Petit Mouchoir on his Tipperary comeback, was toying with them like a cat would a mouse.

When Mullins shook Aramon up, the seven-year-old, a Grade 1-winning novice, scooted two-and-a-quarter lengths clear. Hearts Are Trumps kept on for second and Petit Mouchoir was a gallant third ahead of Hunters Call.

Aramon’s stablemates Buildmeupbuttercup and Mt Leinster were next. 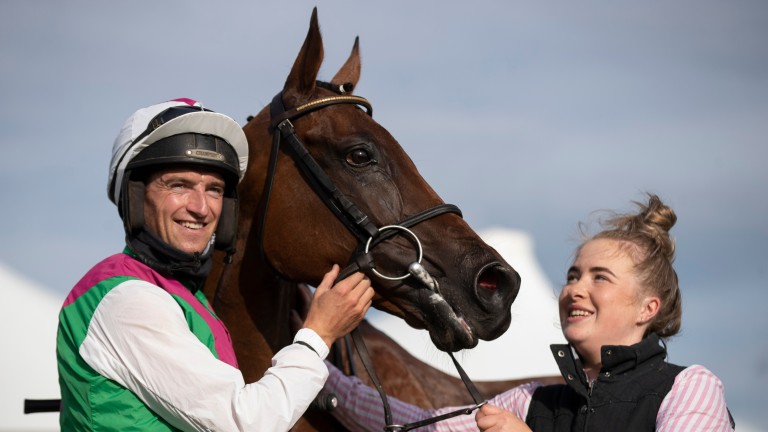 “That was magic – a big surprise,” the winning rider said of the 7-1 shot, who Betfair introduced at 25-1 for the 2021 Champion Hurdle. “I never dreamt of this. I thought riding here would be the pinnacle of what I could do here so to win one, let alone two, is different gravy. I’m very lucky being up I am, that’s all I can say.

Davy Russell had to stand himself down earlier in the day after aggravating a back injury, paving the way for Keith Donoghue to partner the 4-1 market leader Felix Desjy.

By the second hurdle, that dream had died, as Gordon Elliott’s charge fell, impeding Moon Over Germany, who unseated Rachael Blackmore, and Play The Game, who fell. Wonder Laish was hampered at the same obstacle and his goose was cooked when Robbie Power pulled him up after the third-last.

Last year’s hero Tudor City couldn’t get into it at the business end but ran creditably in seventh, while Aramax’s challenge never materialised. As such, some of the main contenders had excuses, but whether any of them would have lived with the scintillating Aramon is another matter. The ground, which dried to yielding in the sunshine following a miserable night on Wednesday, probably helped as well.

“For top weights to win like that is very rare, so I’m very grateful,” Mullins said. “I got a rollicking from Willie yesterday for missing the start in the Plate, so I wasn’t going to let that happen again!

“He was 9lbs higher than Sharjah as well, and I thought his chance was gone yesterday with all the rain but I walked the track this morning and I looked at the time of the first race and it was quite quick. I thought he might be placed, although I thought the weight might stop him from winning. He has to be a Champion Hurdle horse after that. We got the perfect run around. When I saw Denis O’Regan on Hunters Call in front I decided to pull out from behind him and sit just off him and we set our own fractions. He is a very quick horse.”

With the champion trainer back at base in Closutton, David Casey, who rode Mystical City to victory 24 years earlier, provided the link in the chain, although the eerily quiet reception was like nothing the stable’s previous three winners returned to.

In the betting ring behind the number one spot where the crowd usually congregate, the cars of the meeting’s key personnel filled the concrete space where there should have been a din of noise and colour.

They paved paradise, as Joni Mitchell sang, and put up a parking lot. We might not have known what we had til it was gone, but it’s pretty clear Aramon is a bit special.

FIRST PUBLISHED 6:56PM, JUL 30 2020
I thought he might be placed, although I thought the weight might stop him from winning. He has to be a Champion Hurdle horse after that