Southwell: Tuesday's meeting was track's first to be run on Tapeta
Getty Images
1 of 1
By James Burn UPDATED 7:28PM, DEC 7 2021

Carausius went into the record books as the first winner on Southwell's new Tapeta surface after he landed the 1m4f handicap for Charlie Hills and Kieran Shoemark.

Arena Racing Company (Arc), which owns and manages Southwell, last year announced its intention to ditch the track's unique Fibresand circuit in favour of Tapeta, which is in place at the group's sister courses Newcastle and Wolverhampton.

The aim had been for the new strip to be installed over the summer, but that date was pushed back and the Phil Kirby-trained Lord Torranaga might be a name for trivia buffs to remember as the last winner on Fibresand, which had been raced on at the Nottinghamshire venue since 1989.

Watch the first race on Tapeta at Southwell

Delays sourcing building materials and deliveries meant a possible comeback date was missed last month, but Southwell officials on Tuesday were able to show off their course, which they hope can help elevate the site's status among all-weather locations.

The Tapeta got the thumbs up from jockeys at a BHA trial recently and the card, which offered nearly £110,000 in prize-money, attracted 98 declarations.

Among them was Carausius, a 17-2 chance for the opener who came clear of Can Can Girl and Contingency Fee.

Group 1-winning rider Shoemark said: "It was quite evident that the surface feels very new, obviously it is, and I think it's going to need a bit of time to bed in, but they did go hard [up front].

"It was typical Southwell race-riding tactics and my fella seemed to love it back here. I think it's got the potential to be one of the top all-weather tracks, especially with the structure of the racecourse – a nice, big, galloping track – but I think we just need to give it a bit of time.

"I think we rode it today like the old Southwell; we got racing very early and it was a slog home." 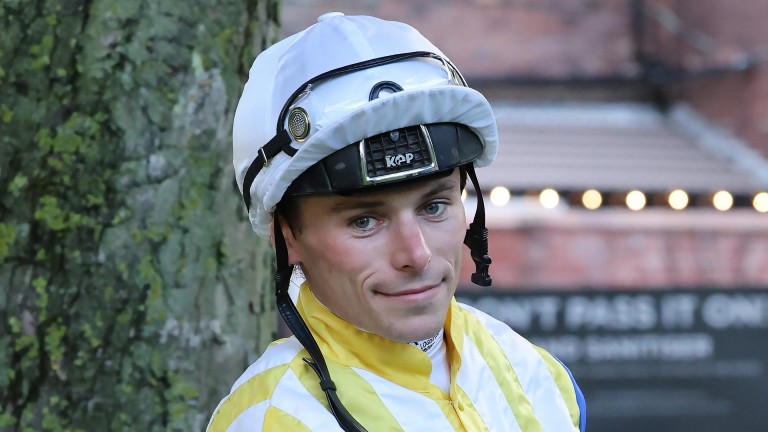 Kieran Shoemark: "It's got the potential to be one of the top all-weather tracks"
John Grossick Racing

The jockey, whose big win in the summer came on Nassau Stakes heroine Lady Bowthorpe at Glorious Goodwood, was riding Carausius for Fiona Williams.

"It's nice to see him get his head back in front," he told Sky Sports Racing. "He won here in March and I thought it would be the making of him and he'd improve a lot.

"He lost his way for one reason or another – I'm not sure why – but I think he's possibly an all-weather horse and it's great for the owner."

John Fahy quickly followed Shoemark into the winner's enclosure after the polished display of the Clive Cox-trained Fernando Rah in the 5f handicap.

"The surface isn't quite there yet," he said. "It's not quite bedded in and is still very loose. I'm sure, with a bit more time and a bit more rain, it will bed in better."

FIRST PUBLISHED 4:18PM, DEC 7 2021
I think we rode it today like the old Southwell; we got racing very early and it was a slog home

Confirmed runners and riders for the Cotswold Chase and Cleeve Hurdle Jockeys 'blindsided' by BHA decision to scrap weight allowance says PJ McDonald If you haven't yet been to Gowran for the Thyestes Chase, make sure you do Racecourses look forward to end of Covid restrictions for racegoers on Thursday Why are jockeys up in arms about the change to the minimum weights in Britain? 'A complete con' - how jockeys have reacted on social media to rise in weights