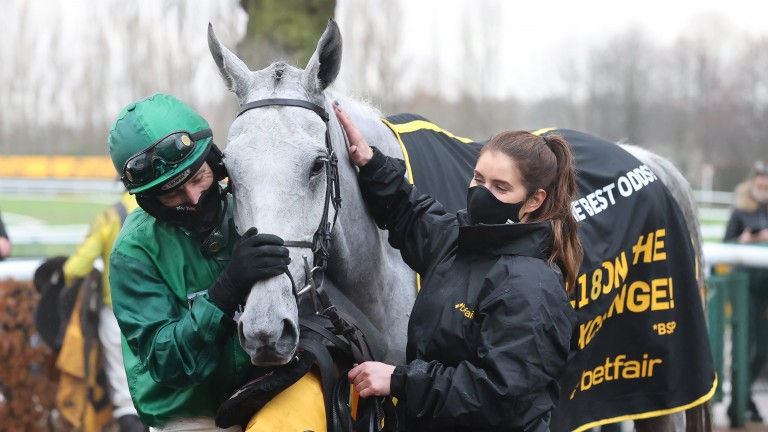 History tells us it takes a special horse to regain the Betfair Chase crown. Kauto Star did it twice and Silviniaco Conti and Cue Card also won the race back having lost it.

Bristol De Mai took his place alongside those chasing greats after fending off the challenge of two-time King George winner Clan Des Obeaux to win the race for a third time in total.

For all the superstar talent that has won the Betfair Chase, Bristol De Mai has arguably become the one most synonymous with the race. The Simon Munir and Isaac Souede-owned grey has made Haydock his spiritual home with five victories from six starts at the track, and always saves his best for the first Grade 1 of the British season.

His only defeat here came in the race last year when beaten a length and a half by Lostintranslation, but he put that right in no uncertain terms under regular rider Daryl Jacob. 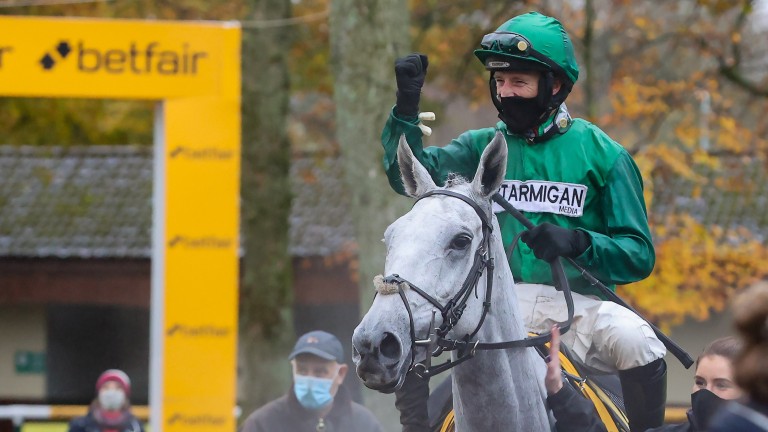 "He's a wonderful horse," said an emotional Jacob. "It's been a tough time for everyone with Covid-19 and when you've got horses like this that bring out special days and moments, you appreciate it all the more. I never write him off and he's been brilliant for my career.

"It was drizzly rain to begin with and then it got heavier and I texted Simon and Isaac to say I'd never been as happy to ride in the rain. I got some wonderful jumps the whole way round, which kept me going forward."

With Lostintranslation seemingly toiling in the ground from a long way out, Clan Des Obeaux loomed up to threaten Bristol De Mai, who seems like he has been around forever but is remarkably only nine years old.

The Paul Nicholls-trained runner-up looked to be travelling more sweetly approaching the second-last but this was the 9-4 winner's happy place and he kept up his relentless gallop to the line for a two-length success.

"I knew I had a horse on me and saw Sam [Twiston-Davies] on my inside, but I was quite comfortable at that stage," Jacob said. "I got good jumps three out and two out and knew I had enough gas to really get me home. The flat, left-handed track is perfect for him."

With Nigel Twiston-Davies staying at home, future targets for Bristol De Mai were unclear. Following his previous Betfair Chase victories he went on to contest the King George. However, the lure of the £1 million bonus is not a factor this season and a trip to Kempton has already been ruled out.

The Grand National was under consideration following his ninth in last season's Cheltenham Gold Cup before the coronavirus intervened. 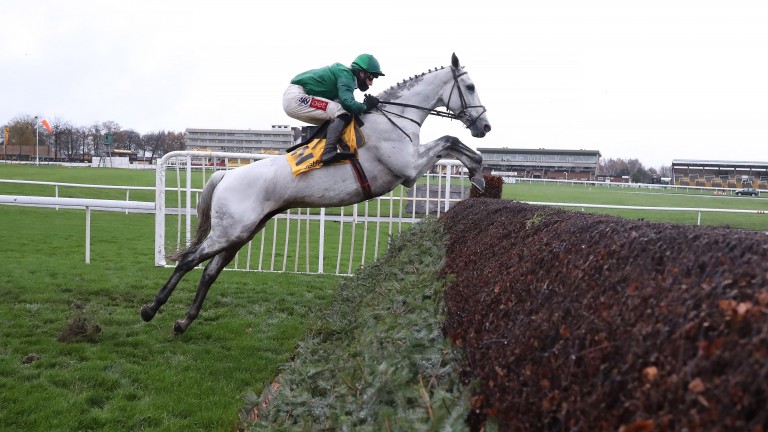 "The Gold Cup didn't really work out for him last year and it was probably me as when he wasn't really facing it I was half thinking about the Grand National," added Jacob.

"I'd love to see him in the Grand National, his jumping is very good and he can be very brave when he needs to be. He's nine rising ten and if there's a season that's going to be it I suppose it will be this one."

Anthony Bromley, racing manager to Munir and Souede, said: "It's a shame there isn't a crowd here today as they really take to him here and they would have been roaring now.

"We might have to run him in a handicap as what else can you do? There's the Cotswold Chase but that's not until the end of January and it's a long time waiting until then."

Clan Des Obeaux had a harder race than might have been expected on the heavy ground, but ran respectably with an eye towards his bid for a third King George, for which he was shortened to 5-2 joint-favourite (from 11-4) alongside stablemate Cyrname.

"It has rained all day and the more it came down, the more worried we were," said Nicholls' assistant Harry Derham. "He's run a fantastic race and I don't need to tell you where he's going. Obviously, it will take something out of him, but we've got a good bit of time."

FIRST PUBLISHED 3:14PM, NOV 21 2020
He roared back to his best at the track he thrives at to emulate the likes of Cue Card and Kauto Star

Clan Des Obeaux 'as good as ever' as Paul Nicholls weighs up Irish Gold Cup raid Winter Million at Lingfield: what is it and which horses are in contention? Which horse who caught your eye today will you be backing next time? 'I was able to dictate' - Eclair Surf routs Classic Chase field for Bellamy Number one fan Daryl Jacob backing Bristol De Mai to shine at Lingfield 'Wonderfully tough' Frodon to spearhead Paul Nicholls' bold Leopardstown raid