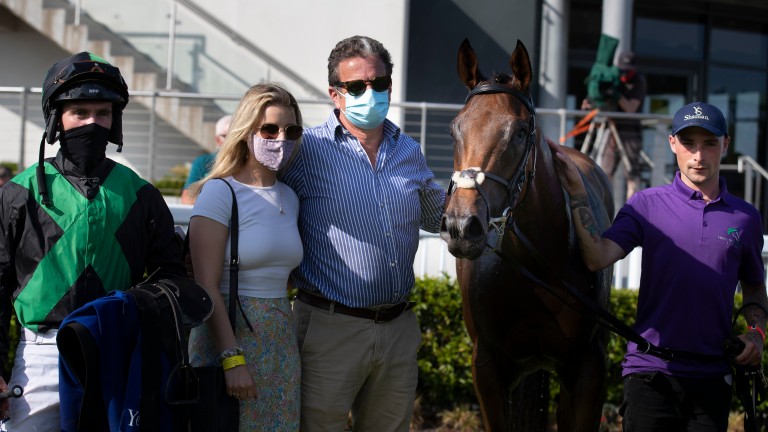 Connections of Wren's Breath after her victory in the Yeomanstown Stud Stakes
Patrick McCann
1 of 1
By Justin O'Hanlon UPDATED 7:57PM, JUL 21 2021

Wren's Breath is blind in one eye but her rivals did not see which way she went as she produced a power-packed finish in the Listed Yeomanstown Stud Irish EBF Stakes for trainer Henry de Bromhead and owner Peter Molony.

The daughter of Elzaam was last of the stands' side group and seemingly going nowhere deep into the six-furlong contest but from a furlong out she soon began to pick up.

She got some daylight on the stands' side and stayed on strongly up the hill to beat more experienced and established rivals by three-quarters of a length.

Rider Gary Carroll said: "That was a big ask for a filly having just her second run. I wasn't going anywhere at halfway and, being blind in one eye, her spatial awareness would not be great stuck in behind  but once she saw daylight she picked up well.

"She's a nice filly, there is more black type in her. She's learning to sprint and has sharpened up since last time."

Church rivals without a prayer

The Churchill filly got a lead into the race from front-running Pennine Hills and had too much speed for her rivals late on as she quickened clear inside the last for victory by two and a quarter lengths. The Karl Burke-trained favourite, Sophie's Star, finished third.

Coen said: "He's owned by Mark Dobbin, who is a new owner with us but he puts a lot of money into the game and it's great to ride a good winner for him.

"She has improved a fair bit for her Tipperary win. I think she will get six. She picked up well and even idled a bit when she got there. I think she's smart and she can only get better."