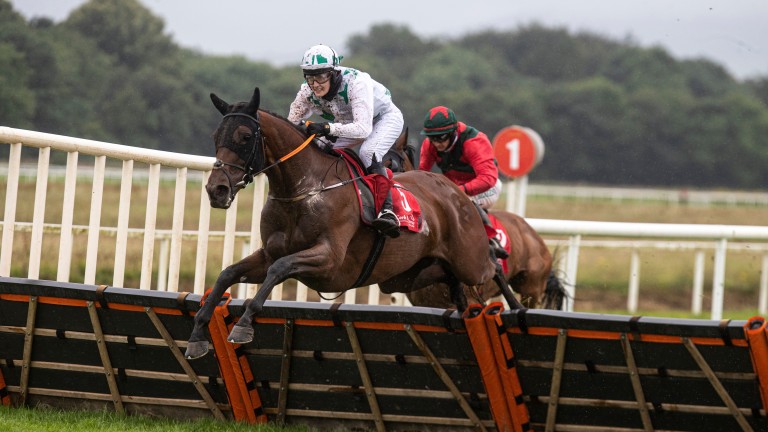 The Fahey training family from Monasterevin enjoyed a fulfilling bank holiday, with Niamh Fahey enjoying it more than anyone as she landed her first winner over hurdles in division one of the 2m3f mares' handicap hurdle.

Riding the North County Syndicate's Hattie Amarin for her brother Mark, she took command of the race at the second-last, and despite her mount running around a good bit in front the pair stayed on resolutely to to see off Bright Sunbird, with 4-11 favourite All Class well beaten.

The winning syndicate have been involved with the Fahey family for many years, and were out in force. Among their number was Dublin star forward Cormac Costello, fresh from helping his county defeat Kildare in the Leinster gaelic football final the previous day. 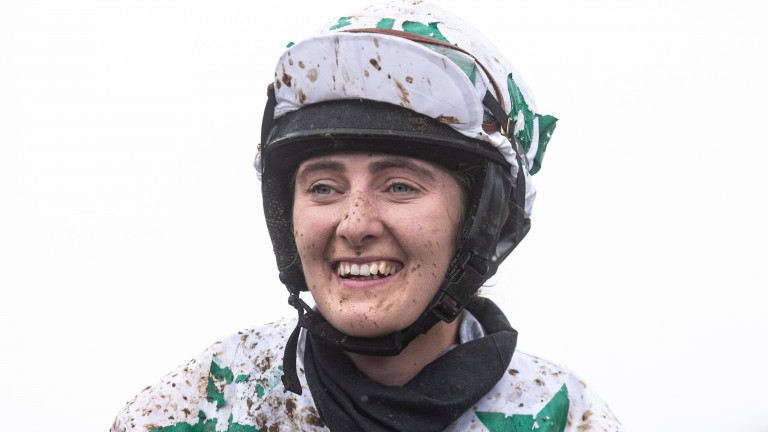 A delighted Niamh Fahey after her victory on Hattie Amarin at Cork
Patrick McCann (racingpost.com/photos)

Mark Fahey said: "That was Niamh's first winner over hurdles and I hope that gets it out of her system! She has ridden four winners in total, but the previous victories came in ladies' races. The one thing she wanted to do was ride a winner against the lads, and she has done that now."

He added of the winner: "She's a good jumping mare but she can tank. Niamh knows her very well though. She has done all the schooling on her and I would be lost without her. I'm just delighted for her and the syndicate. It's their first time being here all together."

The Fahey family were not long in keeping the party ticking along as Mark's uncle Peter landed the second division of this mares' handicap hurdle with topweight Miss Arccol.

The daughter of Arcadio got a cool ride from Kevin Sexton as she came from just off the pace to win with a bit in hand.

Fahey said: "She has been improving the whole time and hopefully can keep progressing. We were worried about the ground, but Kevin gave her a good ride – we'll keep going in handicaps with her."

He added: "She's owned by the Festival Dreamers Syndicate and Tom Keane, who oversees that syndicate, has had a good couple of days. He's involved with Insane Bolt, who won for us at Galway on Sunday."

Another goes in again

The only real reverse for the Faheys on the afternoon was the defeat of Peregrine Run in the 3m conditions hurdle. The rain almost certainly came at the wrong time for the 11-year-old as he was unable to cope with the John McConnell-trained Go Another One, who was winning the race for the second straight year.

The winner was giving Peregrine Run 10lb, so it was a noteworthy performance.

"He won this last year when he was well in, he wasn't so well in this year so he's certainly not getting any worse!" said McConnell. "He is still really enthusiastic and he was probably the last horse to pull up."

FIRST PUBLISHED 7:08PM, AUG 2 2021
That was Niamh's first winner over hurdles and I hope that gets it out of her system!