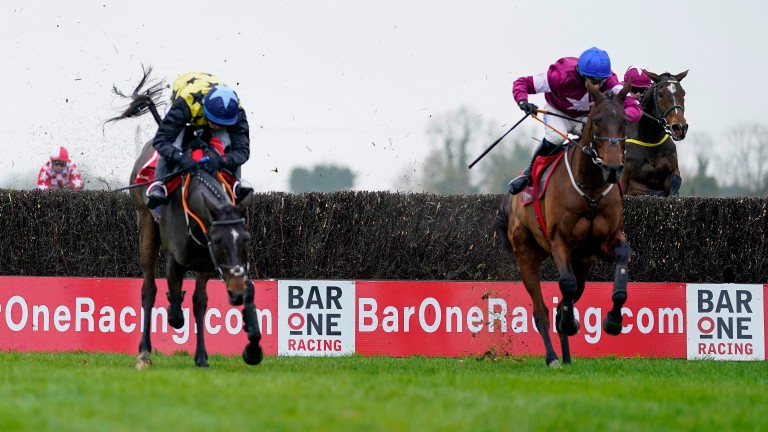 Drama at the last: Beacon Edge (far right) jumps the fence behind Gabynako (left), who pecks on landing, and Fury Road
Alan Crowhurst
1 of 1
By Justin O'Hanlon UPDATED 6:33PM, NOV 28 2021

Beacon Edge came out best in a thrilling finish to the baroneracing.com Drinmore Novice Chase but if you picked him out as the winner jumping the second last, you should definitely do the lottery this week.

Beforehand the race looked a competitive Grade 1, not a vintage one, and in that respect the race being won by a maiden over fences was probably not the greatest surprise, but the Gigginstown-owned son of Doyen was struggling most of the way under Denis O'Regan.

His jumping was more laboured than most in the eight-runner field as they went a searching gallop, but in the end that brought the stamina of last season's Stayers' Hurdle fourth into play as he stayed on relentlessly from the final fence to pass Gabynako and Fury Road close home and score by a length and a quarter. 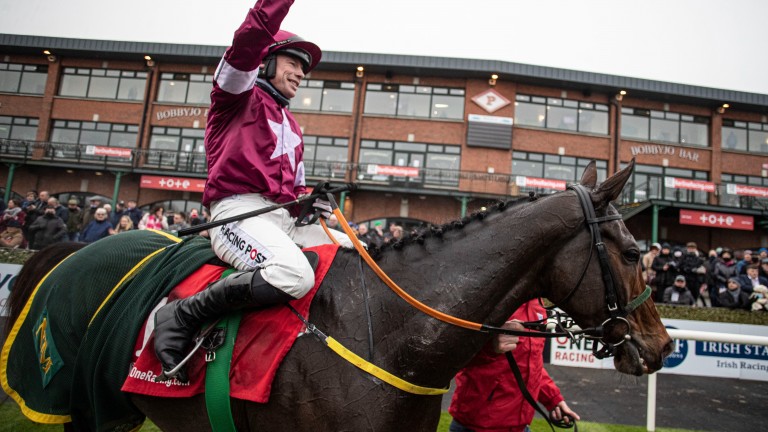 For O'Regan, it was a first Grade 1 win since landing the Finale Juvenile Hurdle at Chepstow in 2013 on Ruacana for John Ferguson. He had Ruby Walsh and Tony McCoy behind him in second and third that day. This victory for Noel Meade had an element of turning the clock back about it too. "To win a race like this for my old boss is just fantastic, it's a real thrill," he said.

Meade said: "Like everyone else I thought we were struggling at halfway and we weren't going to be at the races, but before the turn in I thought we were getting back into it after they had gone so fast in front. The two in front of us made mistakes because they were going so quick and we outstayed them in the end.

"He has a bit of blood in his nose, I don't know what caused that. He has never bled before. It didn't stop him. And you would have to think three miles will suit looking at that. The three-mile Grade 1 at Leopardstown looks the obvious race."

Gabynako rallied late after a final-fence mistake to grab second for Gavin Cromwell and Darragh O'Keeffe on a frustrating day for them after My Mate Mozzie's last-gasp defeat in the Royal Bond.

Cromwell said: "It's one of those days. He never missed a beat the whole way and just landed a bit steep at the second last, which cost him momentum, and did the same at the last. We'll take the positives out of it but it's a little bit frustrating to be second in two Grade 1s we could have won.

"I think Gabynako will step up to three miles. The Grade 1 at Leopardstown looks right up his street."

FIRST PUBLISHED 1:53PM, NOV 28 2021
The two in front of us made mistakes because they were going so quick and we outstayed them in the end

Paul Nolan making most of ammunition as youngster Daily Present impresses 'He's a strong stayer so the hill at Cheltenham will definitely suit him' 'You could close your eyes on him' - Cooper elated as Dunvegan delivers again Can the in-form Dunvegan bag another valuable handicap chase at Fairyhouse? Another Aramax? Boodles favourite Britzka out to cement Cheltenham credentials