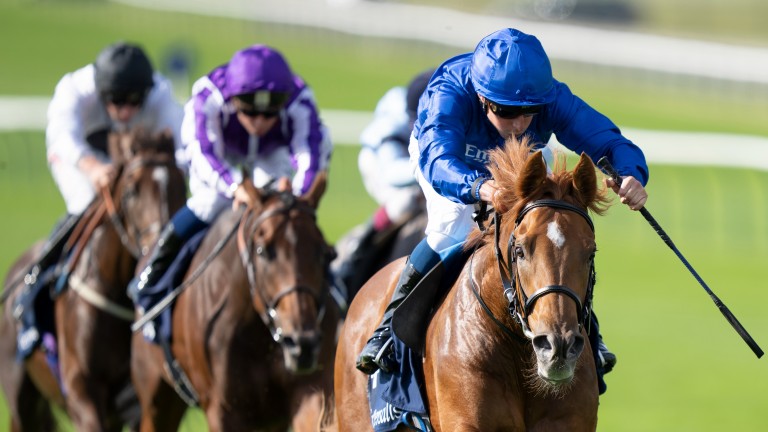 Modern Games pricks his ears in the final stages of the Tattersalls Stakes at Newmarket, with favourite Trident (purple) in arrears
Edward Whitaker
1 of 1
By Lewis Porteous UPDATED 5:28PM, SEP 23 2021

It says something when you are finding it hard to keep your top juveniles apart, but that is the enviable position Charlie Appleby finds himself in after Modern Games further strengthened the trainer's hand in the two-year-old division with a smooth win in the Group 3 Tattersalls Stakes.

What did we learn from the Tattersalls Stakes? Our experts assess Modern Games

"He's not a big, imposing horse by any stretch of the imagination, but he worked particularly well on Saturday and our plan was to go and make it, and make them come at us," said Appleby of Modern Games.

"It was a great ride by William Buick and the tactics paid off. He's a neat, little horse but I wouldn't pitch him in as a Dewhurst horse.

"If you put him and Native Trail together at home there wouldn't be much of a competition really, and maybe we'll look at something like the Breeders' Cup because he's got natural pace and plenty of experience under his belt."

Graduating from a nursery success at Doncaster, Modern Games was dwarfed by his rivals in the paddock, but he puffed out his chest as he quickened into the Dip and was always holding favourite Trident on the climb for home. 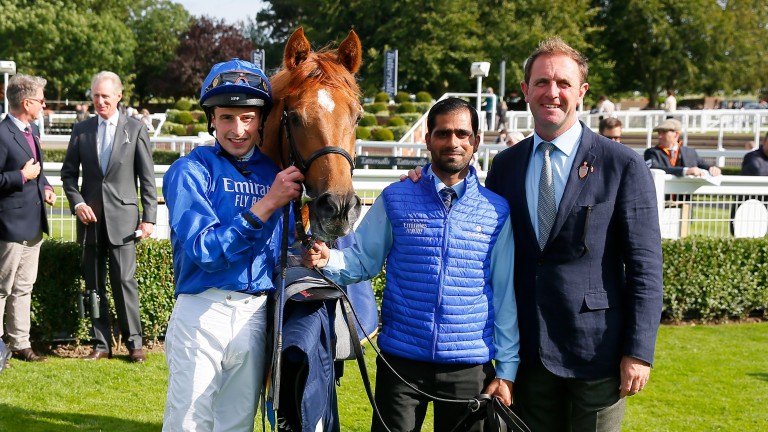 Appleby added: "Modern Games is going to be a nice, solid horse for next year but we feel, if we want to go again this year, he would take a bit of race nous with him to the Breeders' Cup.

"Along with Albahr, we've got two, hard-knocking sons of Dubawi, who wouldn't look out of place in America."

Paddy Power favour Albahr at the head of the Juvenile Turf market at 5-1 with Modern Games next at 6-1.

Buick, just about holding on to the coat-tails of Oisin Murphy in the Flat jockeys' championship race, was suitably impressed with the winner and thought the tight turns of Del Mar would hold few fears for Modern Games.

"He's ultra straightforward and has taken every step very well," said Buick. "I was very surprised when he got beat at Leicester under a penalty – we couldn't believe it – but the ground might have been a bit slow for him that day. Apart from that he has done nothing wrong.

"He's three wins from five starts and has taken the step up from nursery class to Group 3 very well. He's got the experience and is built for Del Mar, which is a very tight track; he's well equipped for it."

Trident, who lost a shoe, was attempting to give Andre Fabre a second win in the race 30 years on from Tertian's success. He was beaten two and a half lengths in second with Harrow a further length and a quarter away in third.

FIRST PUBLISHED 3:02PM, SEP 23 2021
He's a neat, little horse and maybe we'll look at something like the Breeders' Cup. He's got natural pace and plenty of experience under his belt

Fury and frustration but also an abundance of smiles on a vintage Champions Day Creative Force breaks Appleby's Champions Day duck with sublime sprint success High-flying Murphy almost home after double puts him three clear of rival Buick 'It fried my head' - jockeys might not enjoy a title battle, but we sure do 'He'll be a nice horse next year' - Crowley impressed with Ikhtiraaq 'I think he's very smart and definitely a Group 1 horse in the making next year'