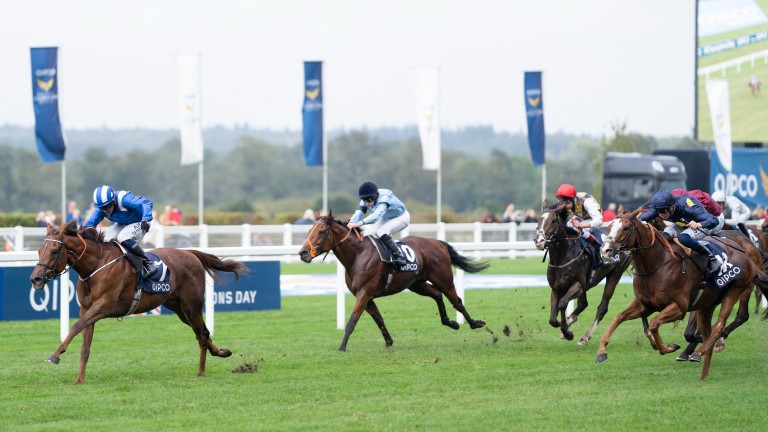 Aldaary: enjoyed a second win at Ascot this month in the Balmoral Handicap
Edward Whitaker (racingpost.com/photos)
1 of 1
By James Stevens UPDATED 5:40PM, OCT 16 2021

Jim Crowley made an outstanding British Champions Day even better in the finale, as success with Aldaary in the Balmoral Handicap completed a 229-1 treble for the jockey.

Riding for the same connections as the brilliant Queen Elizabeth II Stakes winner Baaeed earlier on the card, Crowley always looked in control aboard Aldaary on the far side and needed only a few strides to pull clear of his 19 rivals.

The three-year-old son of Territories was recording his third win at Ascot, a fortnight on from his impressive Challenge Cup success.

Crowley, who had also been successful on Eshaada at the meeting, said: "It’s been fantastic. I came in today with some lovely rides, but it’s a tough place to ride winners.

"For me it was one of the best days racing that I’ve seen, let alone to have been a part of. I had fantastic horses running today and it's so nice to have crowds back.

“Aldaary is very tough, he loves soft ground. He won here at the last meeting but these handicaps are not easy to win and William [Haggas] has done a great job with him. Hopefully he can make him into a pattern horse next year.”

Sealiway strikes for Mickael Barzalona and France in Champion Stakes

FIRST PUBLISHED 5:30PM, OCT 16 2021
I came in today with some lovely rides, but it’s a tough place to ride winners