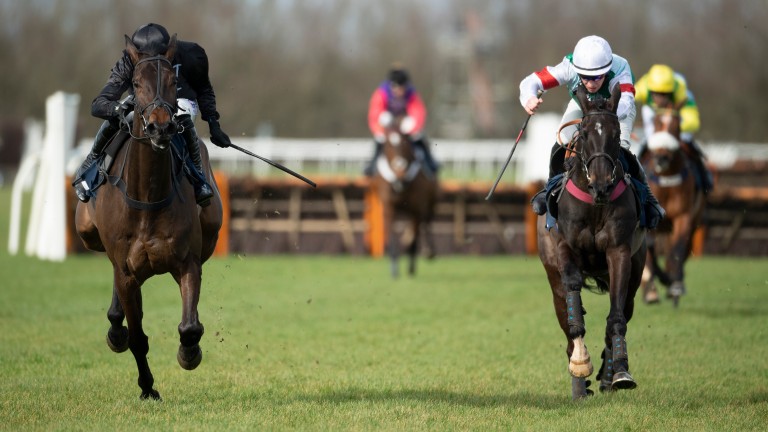 Brave Seasca (right) gets the better of Interconnected at Huntingdon on Thursday
Edward Whitaker
1 of 1
By Sam Hendry UPDATED 3:11PM, FEB 25 2021

Dan Skelton described himself as "delighted" with the performance of Interconnected despite the most expensive jumps horse to be bought at a public auction suffering a shock defeat on his return to action after a near two-year lay-off when beaten by the Venetia Williams-trained Brave Seasca.

Ridden by the trainer's brother Harry, Interconnected had travelled powerfully in the 2m novice hurdle and looked the likeliest winner approaching the last but couldn’t match the strong finishing effort of Brave Seasca, who overhauled the 11-10 favourite by a length and a quarter.

Skelton said: "He's had a long time off and I'm delighted with how he's run first time. He jumped beautifully and settled but just got a bit tired coming up the run-in.

"Everyone wanted to see him win today but this is sport and it doesn't always go like that. He hasn't lived up to his price tag but he doesn't know that. The horses don't know how much the hammer falls at."

Interconnected had not been seen on track since finishing runner-up to Emitom on his hurdles debut at Kempton in March 2019 when trained by Nicky Henderson.

That performance encouraged owner Darren Yates to part with an eye-watering £620,000 to secure Interconnected at auction in May 2019, but injury had kept him out of action since joining his new yard.

Skelton also confirmed that Interconnected would not be taking up his entry in next month's Ballymore Novices' Hurdle and will embark on a novice chase campaign next season.

Most expensive jumps horse bought at auction ruled out for season

FIRST PUBLISHED 1:27PM, FEB 25 2021
He hasn't lived up to his price tag but he doesn't know that. The horses don't know how much the hammer falls at